Why do oscilloscopes have such high sampling rates when the bandwidth is low?

Lets say we have an oscilloscope with Bandwidth:70MHz and Sample Rate:2.5GSample/s.

Since we can capture adequately signals of frequency 14MHz (1/5 of bandwidth rule of thumb,) why do we need such a huge sample rate?

The aim of this answer is to provide a basic representation of what an oscilloscope might display and, in order to make the explanation as accessible as possible (and cover the issues of sampling and aliasing), simplifications are used. A decent digital oscilloscope would use a reconstruction filter to make the displayed waveform better than what the raw output from an ADC would look like but, in my opinion, going into details about reconstruction filters is beyond the scope of the question.

why do we need such a huge sample rate? 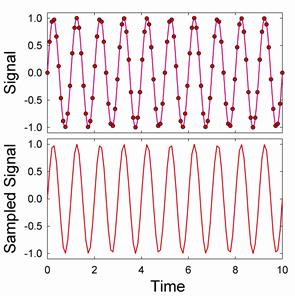 It's not perfect - there are a few anomalous looking artefacts but, it's not bad (good enough for an oscilloscope). 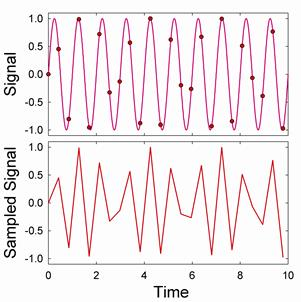 Looking at the 2nd image, although it is still sampled above the nyquist rate, do you really want "strange artefacts" on your screen that might make you think that this is what your real signal looks like? Pictures from here.

Since we can capture adequately signals of frequency 14MHz (1/5 of bandwidth rule of thumb,)

Sampling has to be greater than twice the maximum bandwidth of anti-alias filters in order to prevent aliasing artefacts making the images untrustworthy such as in this example of aliasing: - 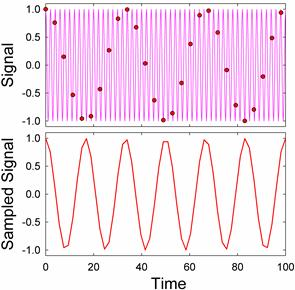 So your rule of thumb doesn't make much sense because clearly, the final image directly above does not represent the original signal.

Your rule of thumb is out by an order of magnitude; for a 70 MHz signal it is 140 MHz. Nor is it a rule of thumb but the Nyquist limit, an absolute lower limit which must not be reached.

Then again, the limit applies not to the fundamental signal but to the highest harmonic present to any significant extent. Higher frequencies will add essentially arbitrary noise to each sample amplitude. Worse, if there are many harmonics, they can add to greatly increase the noise level.

For example, if you want a clean sample of a signal with a significant fifth harmonic, you will need to sample at over ten times the nominal frequency.

Digital pulses are a perfect example of the multiple-harmonics problem. When you see "ringing" of the pulse on each transition, you may not be able to tell whether it is really there or an artefact of the measurement.

Good oscilloscopes get round this by filtering the input signal to remove unwanted harmonics above their specified max frequency, then sampling at above twice that frequency. They need some leeway because no filter is perfect and reconstruction of an amplitude-varying signal also needs some space to allow for the harmonics thus created. (This last especially is seldom appreciated by those who have not yet been bitten by it).

This is a type of question which keeps popping up, and I think that the main issue here is the definition of bandwidth and frequency, and the use of multiple different definitions for those terms.

Namely, the 2x "rule" of the sampling theorem is for signals which are completely band-limited, as in, there is nothing outside of the limited bandwidth. This is very important to keep in mind, because in real-life signals, we can't really fulfill that expectation, but as I'll explain later it does not matter. Also keep in mind that the sampling theorem comes from the world of telecommunications, this will be interesting later on.

On the other hand, the oscilloscopes are defined usually using the -3 dB bandwidth rule.

Let us have a signal generator which is capable of producing a signal whose amplitude does not depend on frequency, and whose amplitude does not depend on external load. Then, we'll connect that signal generator to our oscilloscope, and start a frequency sweep.
As the frequency of the generator increases, the amplitude measured buy the scope will decrease, due to the oscilloscope's limited bandwidth. Once the amplitude decreases by 3 dB, we've reached the rated frequency of the scope.
Do note that scopes have a large dynamic range, and the scope will continue being able to see the signal as its frequency keeps increasing. The signal won't disappear! At some point, the amplitude of the signal will be low enough, as to be indistinguishable from the background noise, and then we won't be able to see it. The exact frequency depends heavily on the signal strength and the filter shape of the scope (many scopes do not have a stated filter shape in the documentation!).

Now let's go back to the sampling theorem. If we have a band-limited signal with bandwidth B, we'll need to sample it with sampling frequency of 2*B, in order to avoid aliasing. So far so good, but I mentioned that a perfectly band-limited signal is not really realizable in real life. What we do instead, is to determine the noise level we expect on our device, and then filter our input signal with a sufficiently steep filter, so that the components of our signal which would alias have sufficiently low amplitude as to be indistinguishable from the background noise. At that point, we don't care as much about the remaining aliased signal components, and we can pretend that we have a band-limited signal. Contrast this paragraph with the paragraph on the bandwidth of oscilloscopes.

Finally, let's touch on your rule of thumb... In telecommunications, we usually know what type of signal we're sending and what we're expecting to receive. Therefore, we can have relatively good assumptions about the bandwidths we expect to see.
On the other hand, with measurement instruments, well we use them to measure something, which might or might not be true. We need to trust the instrument and be sure that its displayed value is correct.
So let's say that we have a square wave signal with extremely short rise times, and let's say that the frequency of this signal is 14 MHz, from your example. For square waves, we usually take the frequency to be one period of the square. However, that's not the bandwidth!
To get a good feeling of the bandwidth, we'd need to see many harmonics of the square wave. So in your example, the harmonic at 70 MHz would be attenuated by 3 dB, and the higher harmonics would be attenuated by a higher value, but the first harmonics which would alias would be at 1250 MHz! That's quite far away from the 70 MHz, and the scope's filter could have already attenuated them down to background noise by this point.

At the end, there's also a practical side: Many oscilloscopes belong to scope families. Your 70 MHz scope might be a part of a family which goes up to 250 MHz, and the 70 MHz model might internally have 100% same hardware as the 250 MHz model, and have a software-configurable filter. With some manufacturers, you can even buy a 250 MHz license for the 70 MHz scope, enter the serial number, and convert the 70 MHz scope into 250 MHz scope. That sampling frequency of 2.5 GHz doesn't look as high now, as it was with the 70 MHz. It's just 10 times the -3 dB frequency of the scope.

Aside from the fact that oversampling helps with relaxing the requirements on the anti-alias filters (which is the same reason why you might find a 96 kSa/s ADC/DAC for 20 kHz audio signals), with the specific example of a 70 MHz scope with 2.5 GSa/s samplerate, there is a much, much simpler reason: The same ADC architecture is used in a number of products of the same family, and it is just easier to reuse the 2.5 GSa/s ADC board with a lower-bandwidth front-end, than to redo the entire architecture for every application.

For example: the Keysight 3000-series scopes all use the same 5 GSa/s ADC back-end, from the 100 MHz bandwidth all the way up to the 1 GHz version. They are designed with the 1 GHz target in mind, and then lower-frequency versions are created to sell at lower cost.

(you can see how this trade-off drops off at the higher end - for example, the UXR series comes with two versions, a 128 GSa/s and a 256 GSa/s board).

The OP's 5x rule is a "red herring", & isn't anything to do with sample rate. It comes from the fact that a perfect square wave signal contains a fundamental & all odd harmonics. In practice, a square wave is sufficiently accurately displayed if the Oscilloscope (analog or DSO), has a 3dB bandwidth out to the 5th harmonic of the fundamental.

Lowish sample rates run into problems when you need to look at a complex signal with high frequency components at a much longer time/div setting than the period of such a higher frequency signal.

The classic case is an analog video signal, where you might, variously, want to look at the signal at a horizontal rate, or a vertical rate.

In the first case, you need to display a time interval of around 64 us & accurately resolve a 5MHz component of that signal.

The early generations of DSO had very small memories. The first generation couldn't sample at a fast rate & still fit 64us worth of samples into the memory. Their answer was to reduce the sample rate, taking it well below the Nyquist limit for the 5MHz component, causing horrific aliasing------the display looked more like my overgrown backyard!

The next generation was a bit better, & had more memory, so didn't reduce the sample rate as much. They could almost, but not quite, display a horizontal rate signal-----the colour burst looked a bit like an 'artists impression" done by a talented 5 year old.

We TV guys were nasty, as we also wanted to observe video signals at field rate, which is a time interval of 20ms. The second generation failed that test badly.

Over time, DSOs got better,(much larger memories) so modern quite affordable ones would have no problem. "El Cheapo" ones, which "scrimp & save" on memory still have the same problem as the old ones. If you Google for "analog video signals" you will find some really dire renditions of horizontal rate video waveforms. They are mostly too terrified by vertical rate signals to try.

The crucial test for any 70Mhz (or any other) bandwidth Oscilloscope (and probes) is to accurately display 70Mhz square wave in this case. Applying Nyquist sampling, means the rising and trailing edges of that 70Mhz square wave will display as a 400 pico Second slope.

In a 70Mhz storage CRO or DPO, pulses, noise or transients shorter than 400pS will not be accurately displayed.