Capacitive moisture sensor not quite working

I have spent the past few days trying to reverse engineer a capacitive moisture sensor I ordered from eBay a while ago. The particular one I received looks like this: 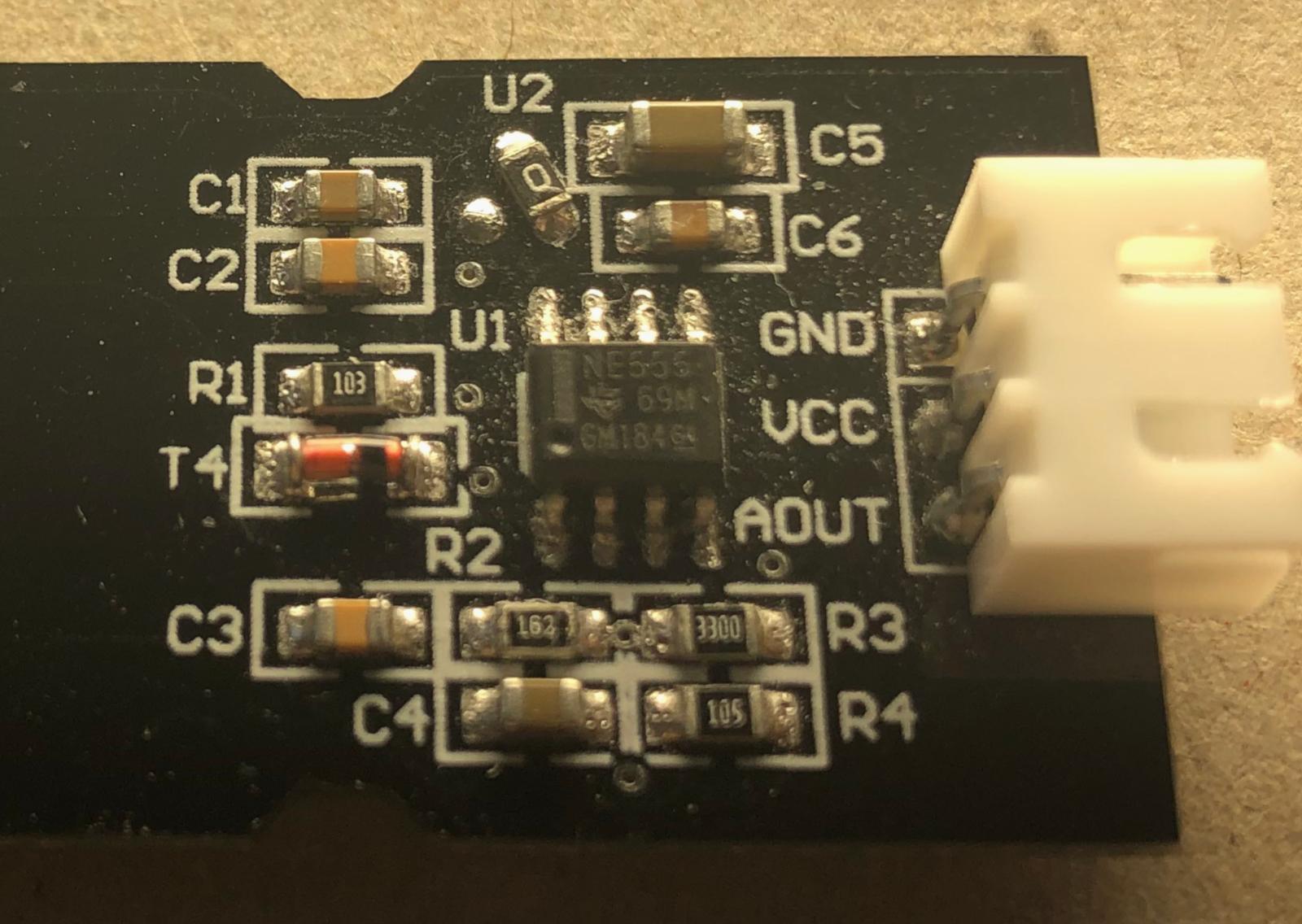 What fascinated me about this sensor was that I could put it in a plastic bag and it would still be able to give accurate moisture readings. In air, the output voltage of the sensor is about 2.3V; in water, I am getting around 0.7V when submerged directly and 1.6V when submerged in a plastic bag. After analysing the circuit, I came up with this schematic (Note: I have left out the voltage regulator and the four corresponding caps, because I am feeding in 3.3V DC from my bench supply directly): 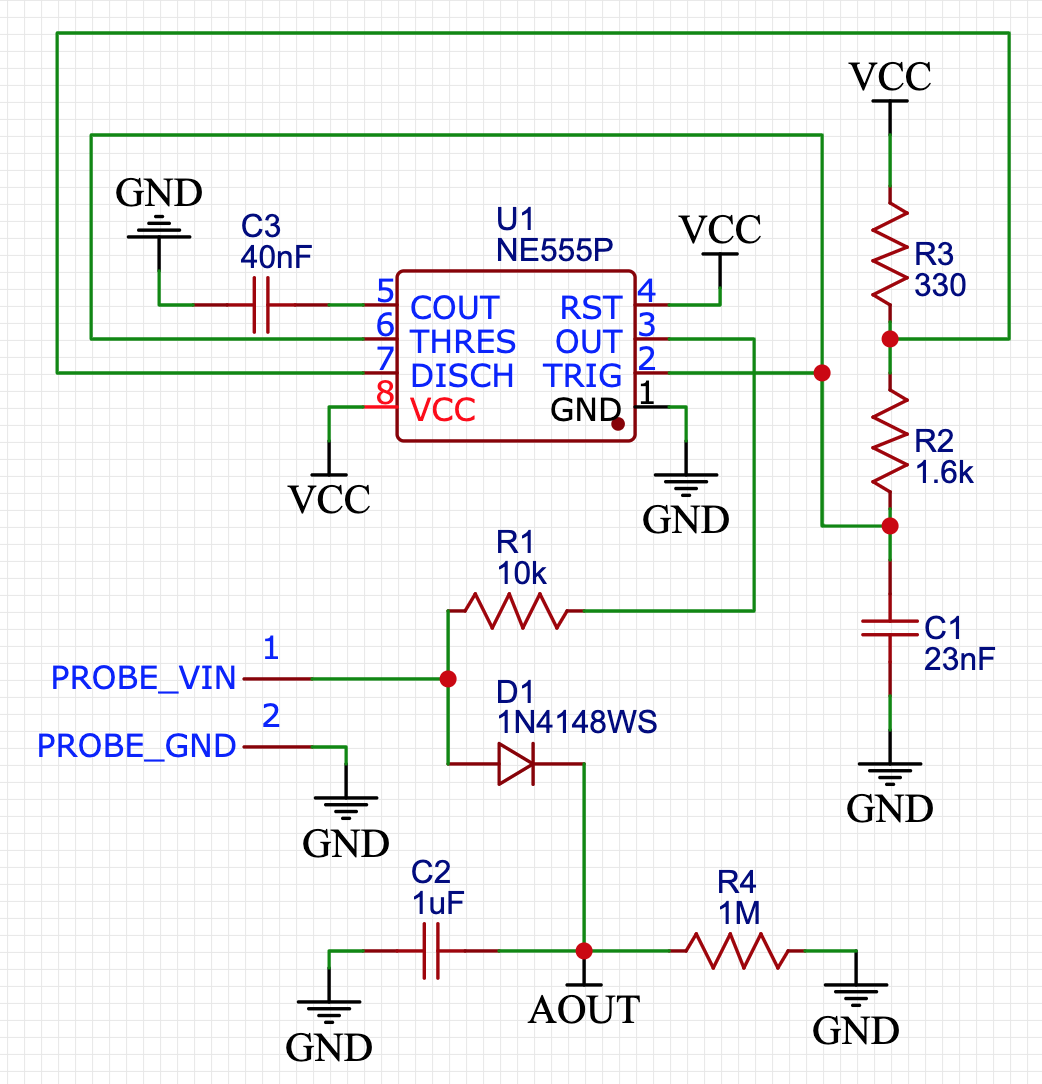 I then built a prototype on a breadboard, which gave me this result: 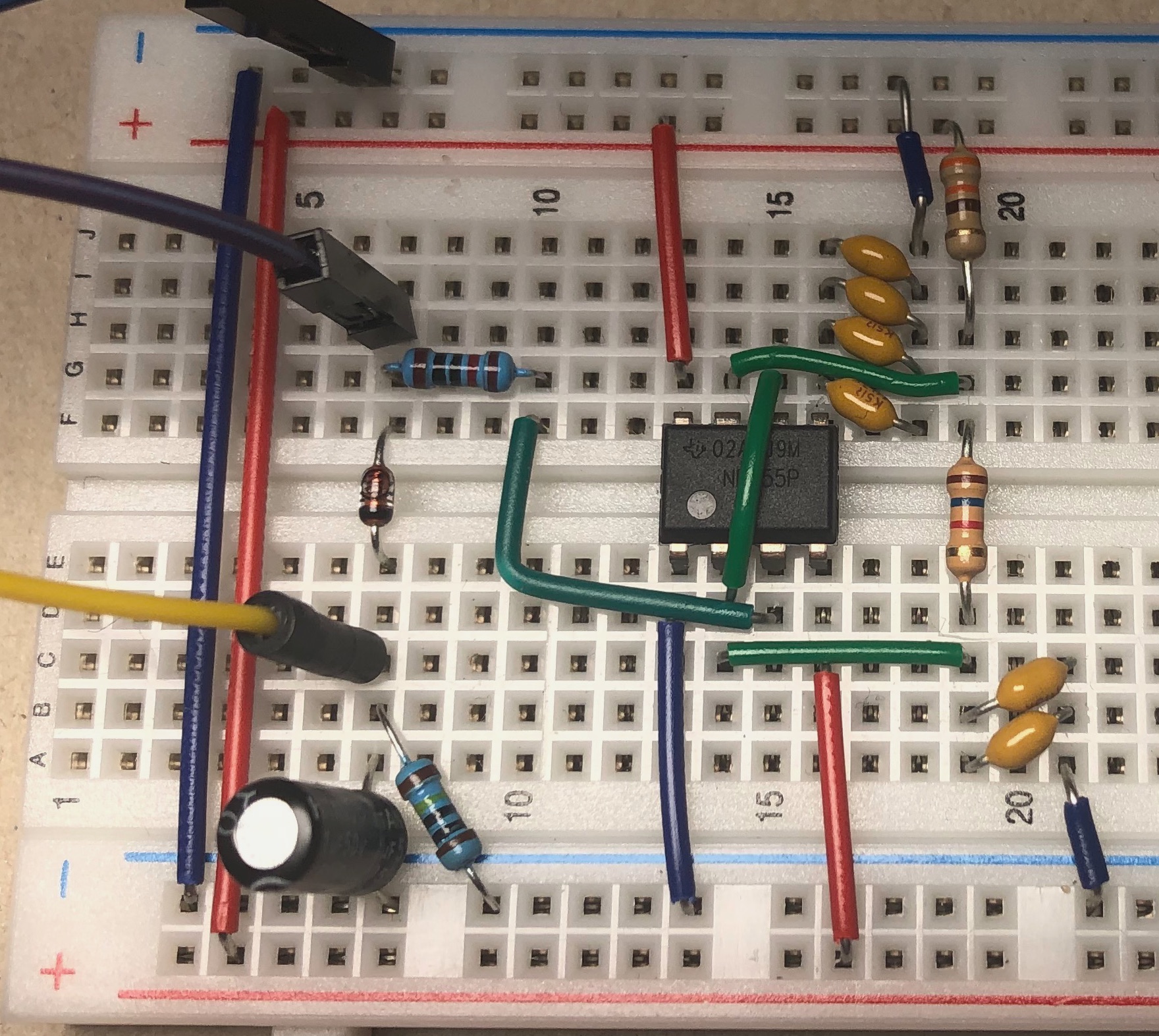 Unfortunately, my sensor does not work as well as the one I bought, because the voltage drops seem to be a lot smaller.

The output voltage in the air is the same. But when submerging it directly in water, I am getting 1.6V (as opposed to 0.7v for the bought one). When submerging it in a plastic bag, I can only see a voltage drop of 10mv to about 2.29V.

I have already re-measured the component values several times and also buzzed out all the traces again to make sure I got the connections right, but I obviously must be missing something.

One thing I have noticed while testing is that decreasing the value of C1 from 23nF to something like 470pF causes larger voltage drops, which makes my custom built sensor behave more like the bought one. But I'm still far from what I would like to see.

I'm an electronics beginner and this is one of my first reverse engineering projects, so any advice/tip would be greatly appreciated. I suspect that there is something wrong with my 555 timer circuit, but since I don't have access to an oscilloscope, I could not really confirm that idea so far.

SOLUTION: I finally managed to get my custom sensor to work like the bought one. To make it work, I did the following:

Also, the 555 chip used makes a huge difference. When using a TI NE555DR, I doesn't work as well as when using the original NE555 of the bought sensor.

How to troubleshoot a NE555 astable based, capacitive moisture sensor?

Calibrating 4 capacitive moisture sensors. I also used a scope to test the NE555 pin 3 output and found all 4 sensor have 360 kHz square waves with very little deviation, perhaps less than 10%.

I noticed that the OP, me and Grove use different values for Ra, Rb resistors. I don't know the capacitance of the blade to test moisture. So I think I need to use a NE555 with fixed (Ra + 2Rb) value to test the effect of the astable output, while changing the blade contact with water, ...

Suggest to troubleshoot from the NE555 astable. Check out test points TP1 (NE555 Output Pin 3), TP2 (Before rectifying diode), and TP3 (Sample and hold cap), using a scope or a status LED.

Scope show the open air frequency is around 360 kHz, output around 2.5V

Clarification on the way I am answering the question

My apologies to all those misled by me that I have suggested an answer. Actually I have not yet started! So far I have been writing appendices that describe the prerequisite knowledge that is need to understand the OP's problem.

It is only after understanding the circuit then we can efficiently troubleshoot the OP's already reverse engineered NE555 based capacitive moisture sensor.

Of course the OP might have already understood the circuit, but I am not sure if I correctly understand thoroughly myself. So I am sort of doing some research which I think other newbies or future readers might also learn together.

What I have researched so far

(1) I started by a preliminary inspection of the three moisture sensors to get a overall picture of capacitive sensor, and why and how it is different from resistive sensor. Basically the capacitance is referring to that of the long metallic blade inserted into the soil, or just in open air if used as a rain detector.

(2) I studied the operation of the NE555 based astable (oscillator) and understand that the capacitance is referring to the capacitor used in the NE555 circuit.

(3) I did a basic test to make sure the moisture sensor I am testing more or less works properly.

(4) I am also thinking of using a bread board to test the circuit with different values of Ra, Rb, C1, and C4. 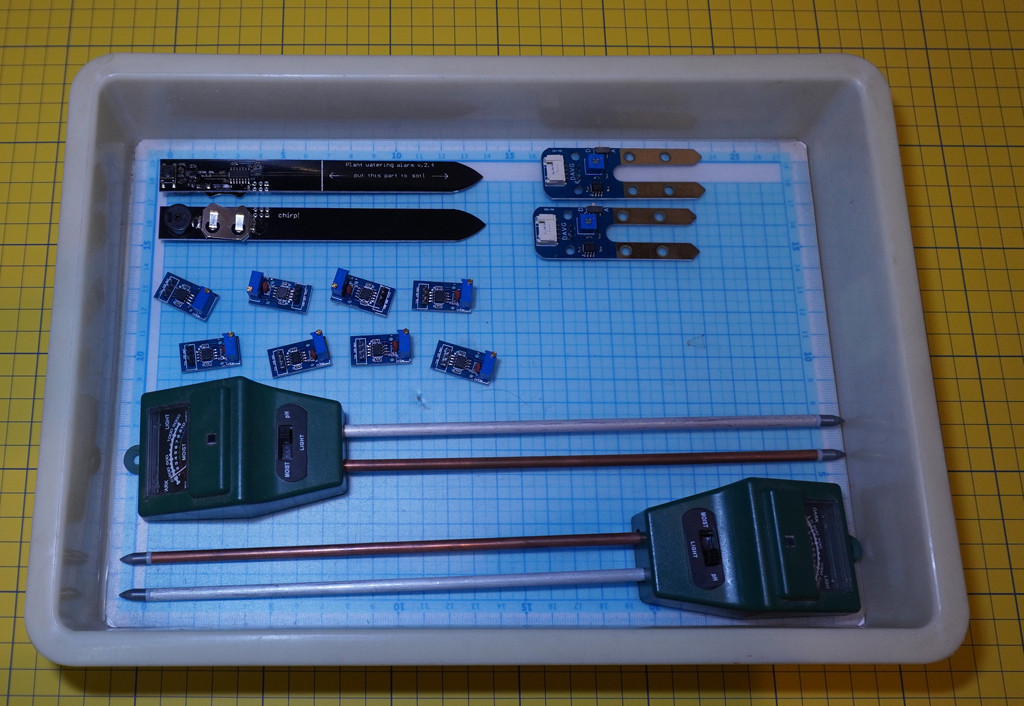 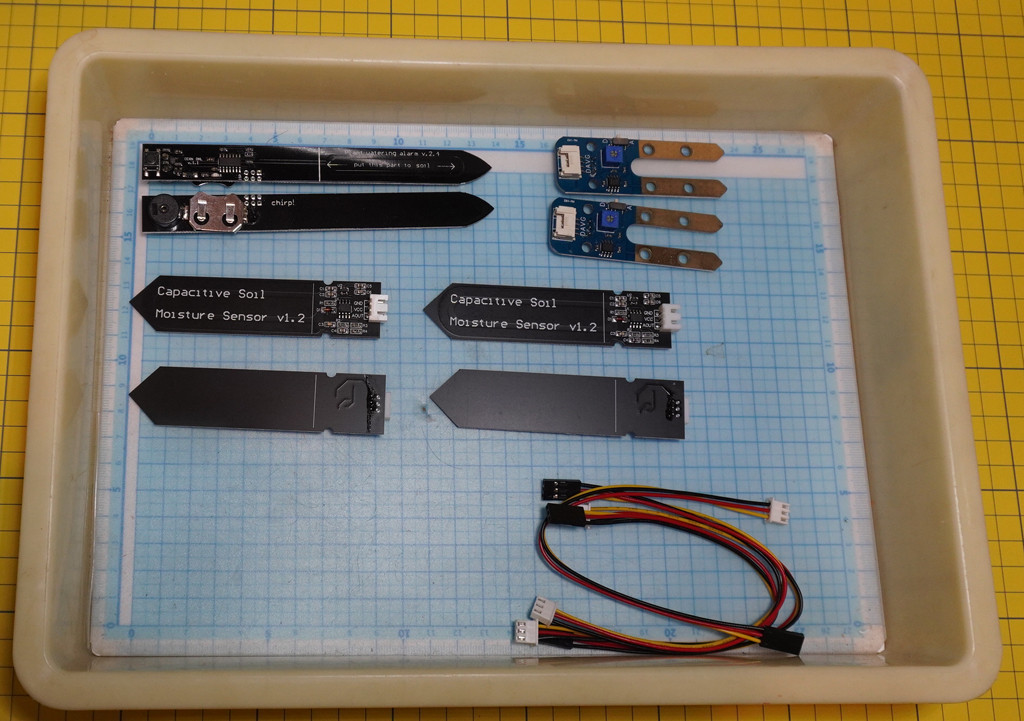 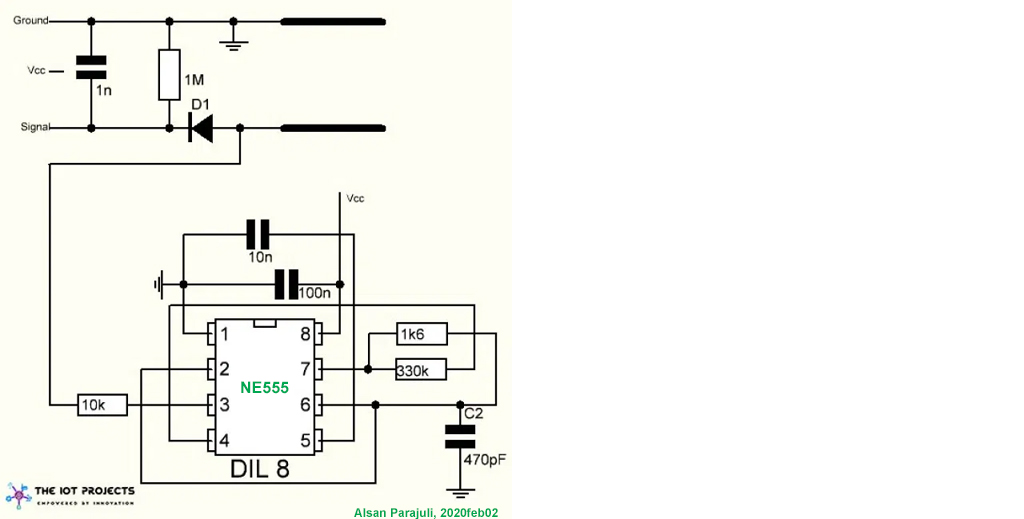 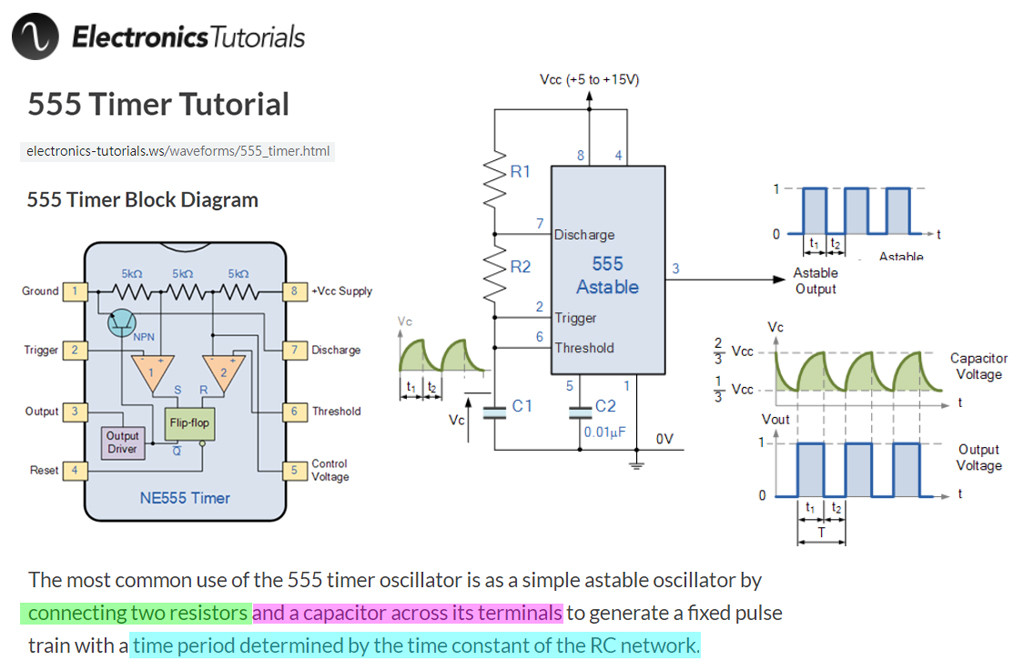 Now I am calibrating my capacitive moisture sensor. 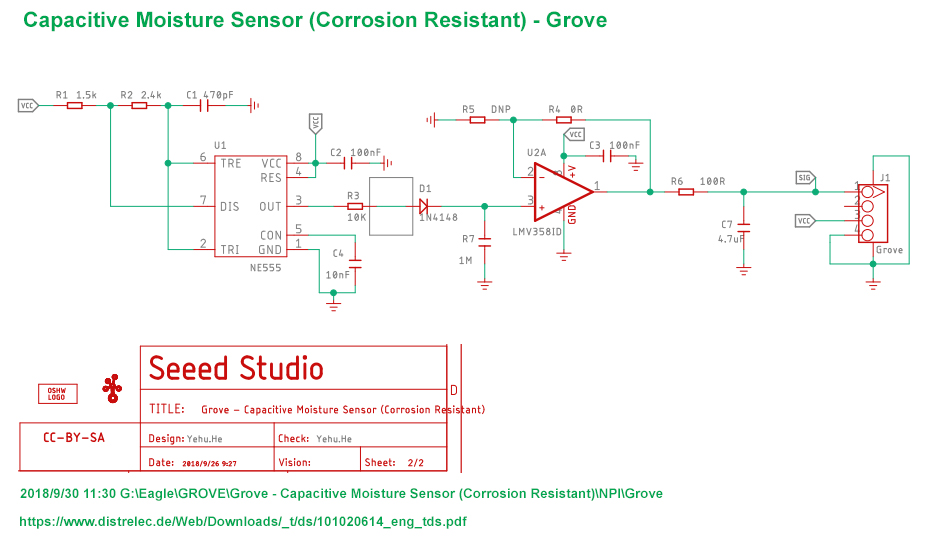 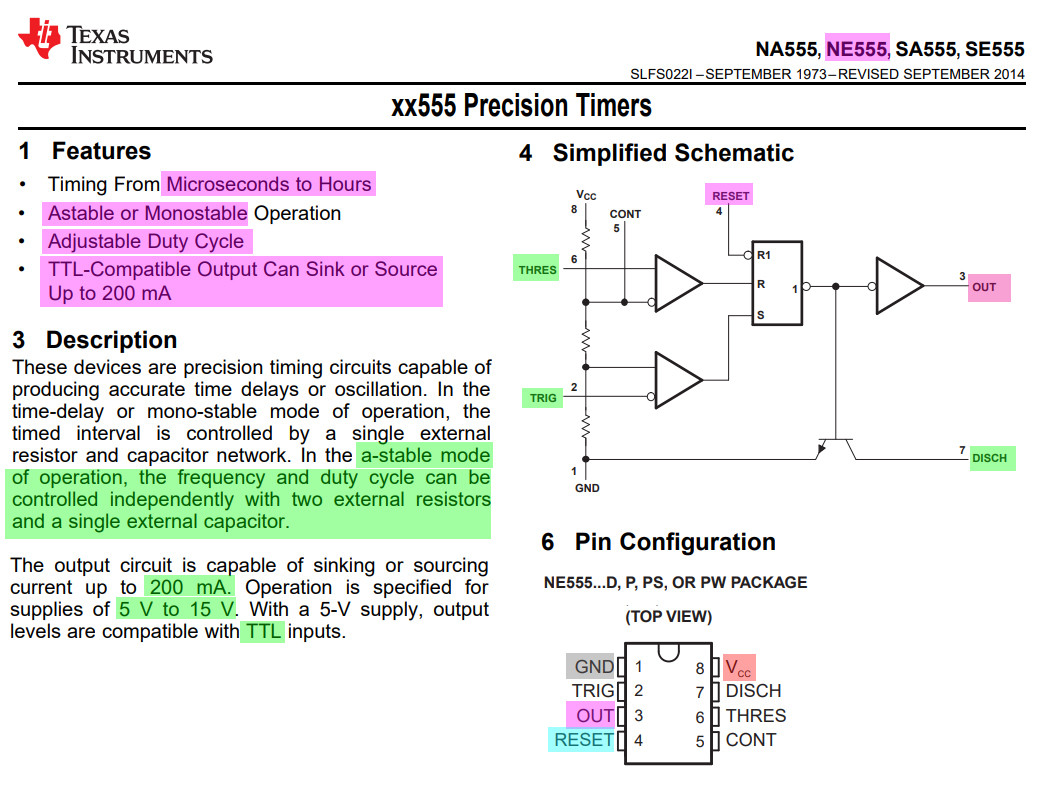 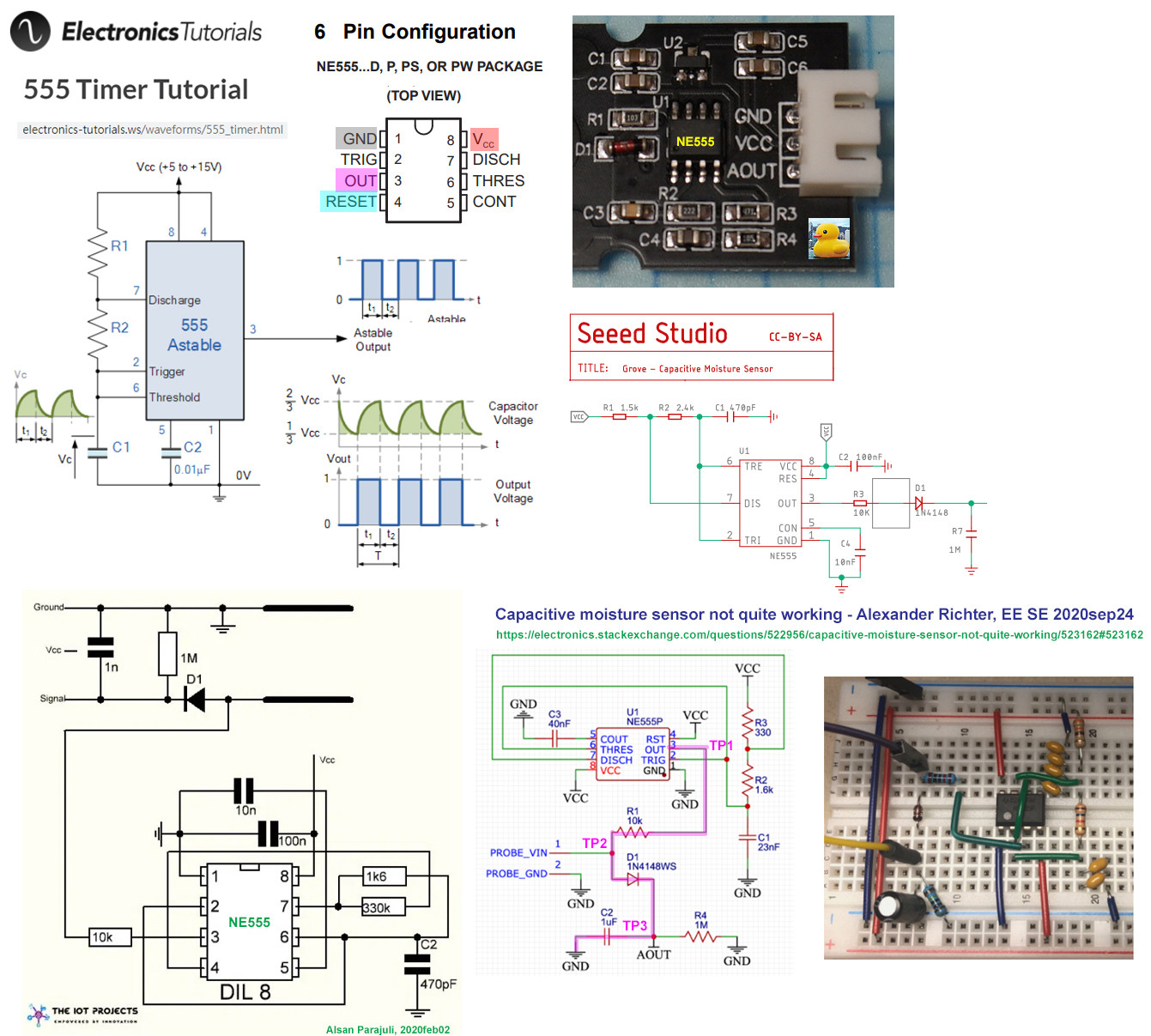 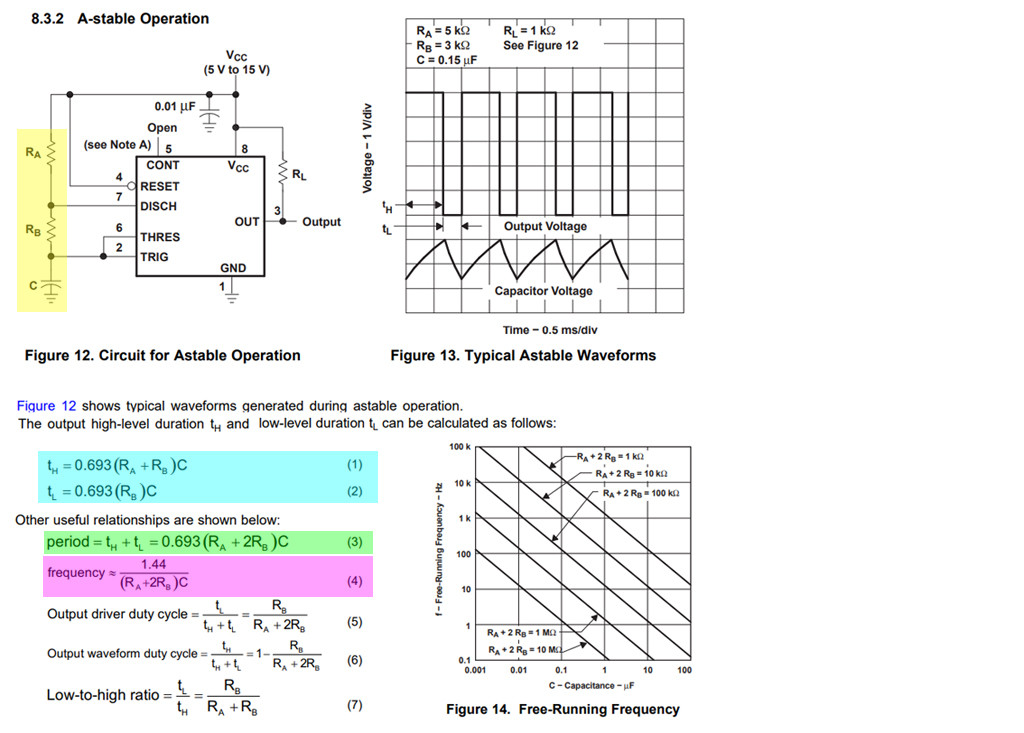 Not the answer you're looking for? Browse other questions tagged sensor capacitance reverse-engineering humidity or ask your own question.