What is this IC Chip on this circuit board?

Very new to electronics outside base knowledge.

This board is from a small smartphone toy, where pressing and holding the button displays 1 color on an attached RGB LED and quickly double tapping the same button changes it to another fixed color. There's no way (on board) to cycle through the various color values, it's just a hard change between different values.

I'm trying to build my own circuit that does the same thing, but I'm not sure what that IC is below the push button. There's no text on it or even an image, so I can't look up the data sheet. Searching the silkscreened "TLBZ-039-V2.0" also yielded no results. My first thought was that it was a generic 555 chip because all it has to do is change the voltage going to the different pads, but all the datasheets I've found for a 555 chip show pin 1 is GND and on this board, it has pin 1 being VCC.

Without taking the IC off the board it also looks like pins 2 and 3 just aren't used, or they disappear somewhere beneath the chip. I can post more pictures of the bare board with the traces once I get the button/IC off. 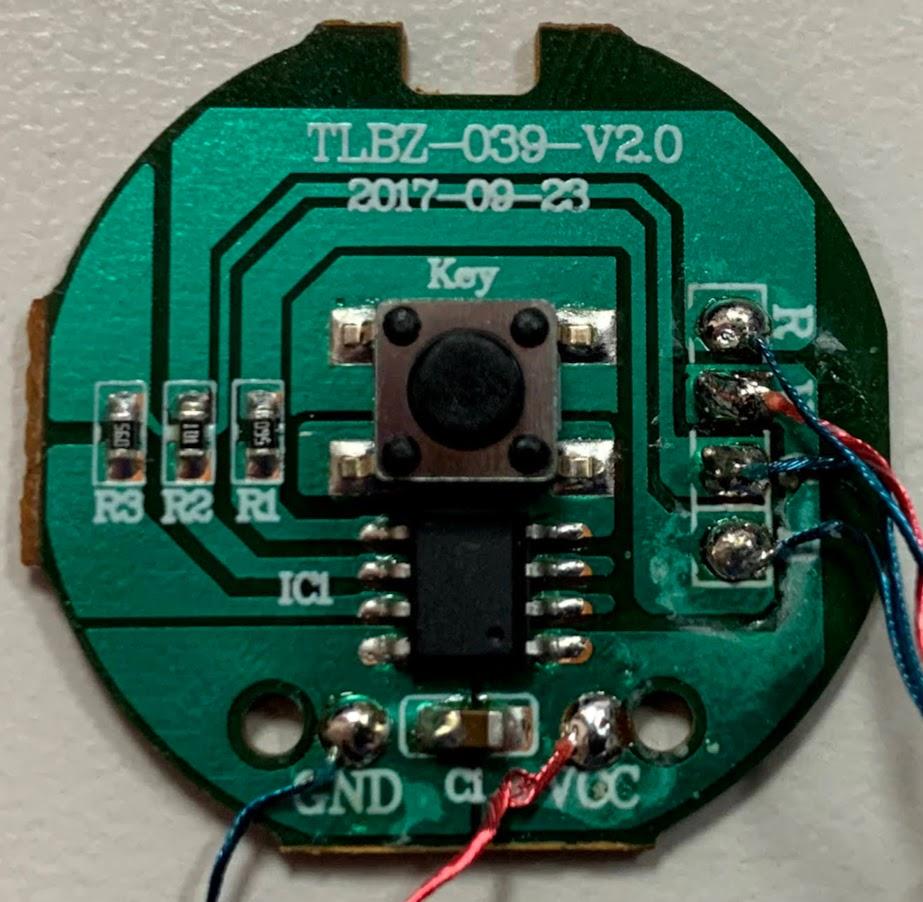 It is most likely a cheap microcontroller that runs a button-reading LED-blinking program to make it work. Or a specific chip made for these kind of products, but a microcontroller allows to just use one chip for all kinds of different products.

It's probably a simple 8-bit MCU like a cheap 12F PIC or similar. It's also possible it's a custom IC if they're manufactured in hundreds of thousands.

If you are simply trying to recreate the behaviour, pick any little microcontroller (e.g. PIC or ATTiny) and program in the behaviour you want.

Put the board in the freezer for 30 minutes then when you pull it out, as it thaws often you will see the outline of any markings that were removed. My suspicion is it's one of those 2-5 cent controllers EEvblog wrote about

I'm trying to build my own circuit that does the same thing ...

As already written, the IC is either a microcontroller or a custom IC.

If it is a custom IC, you have no chance to get the same IC and you have to use a microcontroller (price: about 1 Euro or 1 US-Dollar plus about 30 Euros/Dollars for a programming device) if you want to build such a device yourself.

However, it requires a lot of programming knowledge to program such a controller, and using an ATtiny 10x programming will be a bit tricky if pin 4 is used because a programmer with a four-state (0V, Vcc, 12V, High-Impedance) output signal is required.

I doubt that cheap programmers have four-state output signals, so a more expensive programmer would be required.

Using pin 2 or 3 instead of pin 4 would make programming easier because only binary output signals are required if pin 4 is not used.

I know based on my very limited knowledge of RGB LEDs that it's just sending different voltage values out through pins 5, 6, and 7 which cause the LED to make different colors.

Such a "color LED" is actually three LEDs: A red one, a green one and a blue one.

If you want yellow, you switch on the green LED and the red one and you switch off the blue one.

The human eye will not perceive this as "blinking" but as 25% brightness.

Not the answer you're looking for? Browse other questions tagged integrated-circuit identification reverse-engineering or ask your own question.