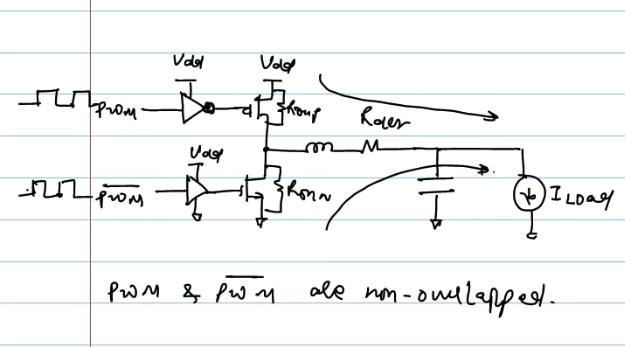 I am trying to understand the basic operation of a synchronous switching-mode buck converter. I a continuous-mode operation the inductor current is always positive, hence from the mosfets to the load. When the pmos is off and the nmos is on -the current through the inductor is decreasing, but still positive. According to Kirchoff, the current must be sourced through the nmos device, since the pmos is off. This is what I can't understand: how can an nmos source current in this configuration? it seems to me it can only sink it! Any help would be greatly appreciated.

"Wait", you say, "it comes from the ground plane?"

Yes. The left end of the inductor has a voltage below the ground plane. Remember the inductor really wants to keep the current the same, and it will make whatever voltage it needs to make in order to "suck" current.

In a non-synchronous buck converter, the lower MOSFET is replaced with a diode. When the inductor sucks current through the diode, it creates a 0.6V voltage drop across the diode which wastes energy. In a synchronous buck converter, a MOSFET is used. The MOSFET's body diode may conduct for a moment, but then the controller turns on the MOSFET which allows it to conduct with much less loss.