I'm looking to make a modular system which can be expanded left or right, as well as fed from either left or right side, depending on customer location and available space.

Having a standard outlet in a female connector and input in a male counterpart will make it less flexible since it has a given direction and/or you need to flip the board upside down. One can cheat using two connectors like this simplified example (pardon my MS paint skills): 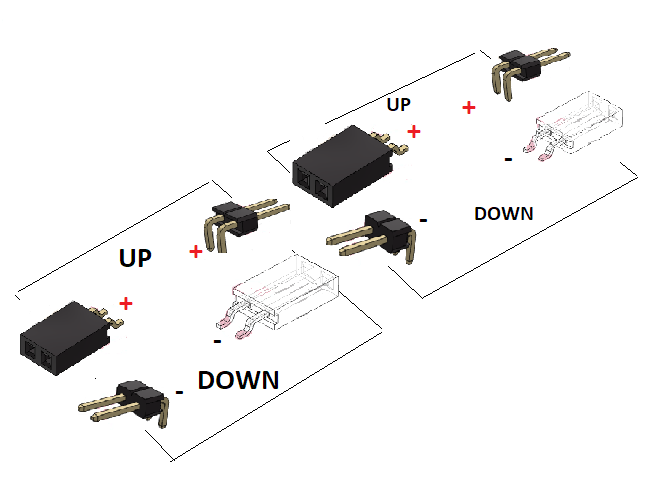 But is there no magic search term for a connector which has one male and one female part in the same connector to achive the same thing? My google-fu is failing me here.

With regards to reducing BOM count, most hermaphroditic connectors seem to be vertically hermaproditic (like interlocking L-shapes that sit vertically on the board). In this case, unless it is truly an edge-mounted version, would need two different versions (right side up and upside down) to mount on the same side of the PCB in order to not produce a stair-case of PCBs when chaining boards together. So you would still need two parts on your BOM.

However, if you can find horizontally hermaphroditic connectors (like interlocking L-shapes that lay flat in the plane of the board) that basically look like single-part versions of your male/female connectors then the stair case is not an issue with just a single part number.

Samtec has the LSXX parts, other vendors have similar horizontal connectors. You should take into account all the creative ways your users can connect the boards.

Not the answer you're looking for? Browse other questions tagged pcb connector or ask your own question.