How far can radio signal be transmitted through a straight steel pipe?

We are needing to transmit data between a robot that will be traversing a pipe, and a base station located at the end of the pipe. The pipe is about 2 feet in diameter, made of steel, and is relatively straight so we expect to have line of sight to the robot the entire time.

We would like to use radio transmission to be able to maximize the distance of travel without having to worry about a spool of cable, however I have relatively little experience with transmission of radio signals through something like this. Assuming line of sight between the transmitter and receiver, will the signal travel less distance in the pipe than it would outside the pipe? We can assume video at around 900 MHz.

We also have the option to be able to poke holes in the pipe at any interval to setup relay antennas if needed, but we are first trying to determine if this is even a viable method before falling back to a tethered system. Any help is appreciated.

You can regard your long steel pipe as a waveguide.

The two lowest frequency modes for circular waveguide are TE11 and TM01. In a pipe of radius 300 mm, the cutoff frequencies for these are 292 MHz and 381 MHz respectively.

a) Below 292 MHz, no RF energy will propagate along the pipe. There will be an evanescent (decaying, or non-propagating) near field over a distance of a few pipe diameters.

b) Between 292 MHz and 381 MHz, only the TE11 mode will propagate. This 'single mode' state is the preferred range for operating waveguides, as the single mode travels at a single uniform speed, and there is no dispersion.

This mode is strongly coupled to the walls, depending as it does on currents flowing in them. Steel is a very bad waveguide material. Being magnetic, the skin depth is very small, and then its resistivity is much higher than copper anyway. Copper or silver (plating) are the usual materials used for the inside faces of waveguides. Any joints in the pipe will interrupt the currents in the walls and compromise your transmission.

Gentle bends will guide the waves along the pipe (the clue is in the name, waveguide), so line of sight is not required.

c) Once above 381 MHz, both TE11 and TM01 modes can propagate. Unfortunately, they travel at different speeds, which will be well below that of c in free space when near the cutoff frequency. Even if you try to launch one particular mode, any discontinuity in the pipe will convert energy from one mode to the other. The different speeds will result in dispersion in your received signal. Dispersion like this only matters if it spreads energy out over an appreciable fraction of your symbol time (assuming a digital link), so with a slow enough data rate, or a short enough pipe, you will not have a problem. Video down a long pipe would not be practical. Both modes will still suffer high attenuation as they are strongly coupled to the waveguide.

As you move up to higher frequencies, further modes will become able to propagate, further compounding the dispersion problem. See the rfcafe for the cutoff frequencies of various modes.

d) Once you get into much higher modes, less of the energy is carried in the walls of the guide and the attenuation will improve. The dispersion issue does not necessarily get any worse, as the energy has many modes to partition between, and their speed will be tending to group near to c.

As the frequency increases even higher through the RF spectrum, eventually you get to light.

The attenuation of the signal, and therefore its reach distance, will be very dependent on the quality of the pipe. I would recommend doing a quick experiment with some commercial 434 / 868 MHz or even 2.4 GHz modules, to see what distances and data rates are possible with multimode. If attenuation is a problem, then going single mode won't help. If dispersion or data rate is a problem, then going down to 350 MHz will help.

If line of sight is a possibility, then optical is certainly worth a try. Depending on the surface finish of the pipe, you may be able to work round gentle bends. It's possible to have very high launch powers with IR diodes, and high sensitivity with commercial IR receivers. You don't indicate the distance you are after, so I've no idea whether this is feasible for your case. Ultrasonics may also be possible, with the same feasibility caveat.

There is a mode that goes down to DC, coaxial or TEM mode. It may be practical to unroll a single strand of insulated wire behind the robot, and collect it again when returning. Couple to it directly at the basestation, and capacitively at the robot. As long as you use frequencies below 292 MHz, there will be no excitation of propagating waveguide modes to complicate things

FWIW, a few decades ago, I bought a reel of surplus four conductor (organised as two twisted pairs with different pitches for low crosstalk) 0.6 mm total O/D steel anti-tank missile communication wire 2.4 km long to play with. This was intended to be paid out from behind the missile as it flew. I estimated >110 dB loss for kHz rate signals along this, which is a practical signal level budget.

Being in essence just a reference, this info is more relevant as a comment to your question. With cited quotations (for your convenience), the text is too long to be included in a comment. Please understand that this "answer" is just a comment.

... The work addressed the need to develop secure system monitoring and control techniques between the field and control centers and to robotic devices in the pipeline. In the first method, the pipeline was treated as a microwave waveguide.

A pipeline can act as a waveguide to frequencies in the few GHz range. In this project, the attenuation of the signal through a pipeline of up to 0.9 miles long was not too severe for frequencies up to 6 GHz (the highest frequency supported by our instrumentation). Commercial 802.11b (2.4 GHz) modems with medium-gain antennas were able to establish a wireless communication link through a 0.9-mile 24-inch pipeline. We did not test the communication through longer pipelines. However, since the modems indicated good signal strength at this distance, we expect that wireless communications can be supported for at least 2 miles. The radios had a limit of 200 milliwatts of transmitted power. Inserting an amplifier between the radio and the antenna should boost this range even further. Also, since both test pipelines showed less attenuation for frequencies in the ranges of 5 GHz, 802.11a wireless radios should be able to transmit farther than the 802.11b radios used for these tests.

I also unfortunately have no answer, but perhaps these comments help the OP along.

The reference by @VVT (https://www.netl.doe.gov/sites/default/files/2018-03/FG113004.pdf) is quite applicable, as it includes not just signal strength measurements but also a modem test for a 24in steel pipe over about 1 mile.

The OP is cautioned not to equate signal strength with data rate under these conditions. While the signal may be strong, it is likely heavily delay-spread (dispersed).

Whether a 900MHz modem can handle the reflections and dispersion depends also on the modulation type, not just signal strength. Compared to free space, there is likely a much higher signal strength, but also much higher delay spread.

I don't know what to make of the reported S11 in fig 16 of the reference. It seems that around 1GHz insertion is impossible in all but generously spaced narrow bands? 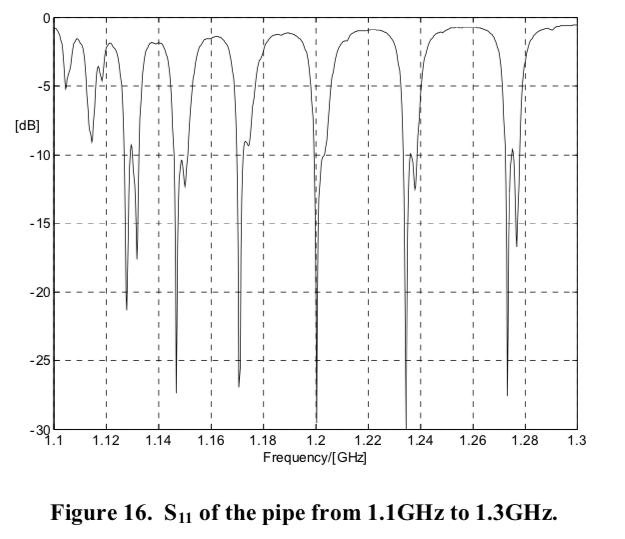 The consistency of signal strength over distance, at 900MHz, seems also to be confirmed by this reference, which reports on measurements in a tunnel: https://www.ncbi.nlm.nih.gov/pmc/articles/PMC5464613/ 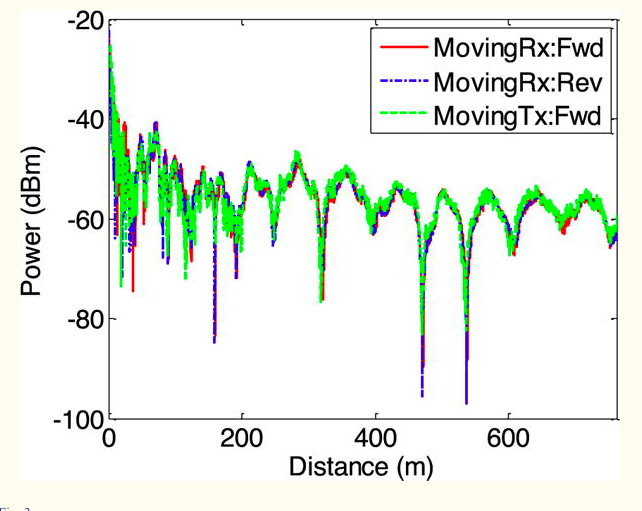 I believe that communication in sub-way tunnels are performed in the VHF/UHF band, and perhaps the reflections (delay spread) and of course excellent propagation make these frequencies more suitable for long and narrow conduits.

Delay spread measurements for subway tunnels are reported in https://www.netl.doe.gov/sites/default/files/2018-03/FG113004.pdf, and even at 20m the rms delay spread already exceeds what one would see in a building.

There will be sufficient signal strength, but some experimentation with different types of modems is warranted to confirm attainable data rates.

Not the answer you're looking for? Browse other questions tagged rf radio transmission-line robot or ask your own question.