I have a hard time figuring out how to calculate the maximum power transfer.. Can anyone help?

I understand that you need to calculate the thevenin resistance by killing the sources and summing the individual resistances, but I'm unsure about the next few steps and formulars to follow.

Edit: After reading through the comments saying I should show more effort, I've tried to apply KCL at the three independent nodes and solving the equations for the unknown variables using wordmat: V_a, V_b, V_c. Assuming V_c is equal to the open circuit voltage V_oc, I've then used V_oc along with the calculated thevenin resistance in the maximum power transfer equation: P_max = V_oc^2 / 4*R_th.

However, I've most likely calculated V_oc wrongly.. Anyone who could tell me what I did wrong in my calculations?

btw, I accidentally mistyped the unit for V_c, which should be in volts. 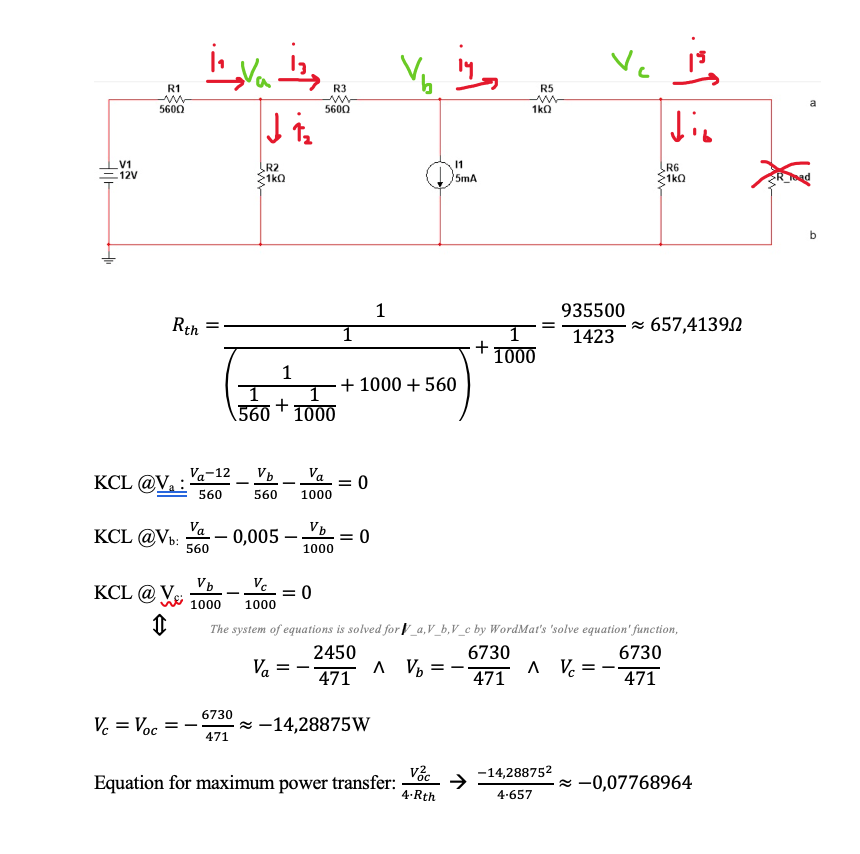 I'm going to borrow (copy) from the Wikipedia page on maximum power transfer that you bring up:

This also qualifies as a theorem since it fits the idea of "a general proposition not self-evident but proved by a chain of reasoning; a truth established by means of other more prosaic accepted truths." (Some may need to spend a little time parsing that sentence to get its fuller meaning.)

That Wikipedia page also provides a calculus-based proof, so I won't bother with it here.

The problem this leaves you with is in converting (somehow) the remainder of your circuit -- the part other than the load itself -- into its Thevenin equivalent, which in ordinary cases is just an ideal voltage source and its series resistance.

You can approach this in a variety of ways. One way is to use what you know about such conversions steps and apply them to the parts you can see in the circuit until you achieve the final equivalent. Another is to just ignore all of that for the moment and treat it as a black box within which you cannot yet see anything, but where just two leads protrude. In this case, the process would be to first measure the voltage with a voltmeter and to then short the two leads together with an ammeter and measure the resulting current through it. Obviously, the hidden Thevenin equivalent would present its voltage directly when measured with an ideal voltmeter, since there would be no current through its Thevenin resistance and therefore no voltage drop behind which the Thevenin voltage might hide. So that measurement gives you one part (that you don't care about here) for free. Also, when applying the ideal ammeter, you will now measure the current that is produced when the now-known Thevenin voltage source produces a current through its Thevenin resistance. Knowing that earlier voltage and now knowing this current, you can compute the resistance by dividing the current into the voltage. That's it.

In your comments, you mention nodal analysis and you correctly mention the likely need for three equations. So let's go with that. First, remove the load resistor from the circuit. Then, assuming you can correctly form the three equations in three unknowns (the three voltages of the unknown node voltages in your schematic, when you assume that the bottom wire is, by definition, \$0\:\text{V}\$), then solving for all three node voltages gives you the Thevenin voltage since this must be the same voltage as at the right-most unknown node. (Or you could simplify the circuit, first.) Now, if you place a wire across the point where the load resistance is currently located and work out the current in that wire, you'd have the two values you need to compute the Thevenin resistance of the circuit prior to the load and you'd have solved the problem by the now-trivial application of the maximum power theorem.

Does that help, sufficiently? Or do you need more?

Not the answer you're looking for? Browse other questions tagged power circuit-analysis power-transfer or ask your own question.