I am trying to build an inverting charge pump capable of supplying ~80-100mA at the second stage. Since the PWM signal must source the current, I decided on using a push-pull stage based on this article, which advertises the following schematic:

However, loading the circuit causes the transistors to get very hot with the advertised R1/R2 and the CE driver stage. I tinkered with those values but was not able to get a satisfying result. The Vbe of the upper transistor does not allow it into cut-off (I think that's the problem).

I have since looked at different push-pull designs, class AB and D amplifier stages and their biasing using both resistors and diodes, as well as other schematics, but have been unable to come up with a satisfying result.

2. Is there a better way to drive this charge pump with a square wave

I will likely use paralleled LMC7660 drivers in the final circuit, but now I would really like to understand why this isn't working and getting it working

As suggested, I have tried separate CE drive stages for each transistor, but the base voltage of the top PNP (Q2, red trace) appears to be misbehaving. The NPN base voltage trace of Q1, green appears ok: 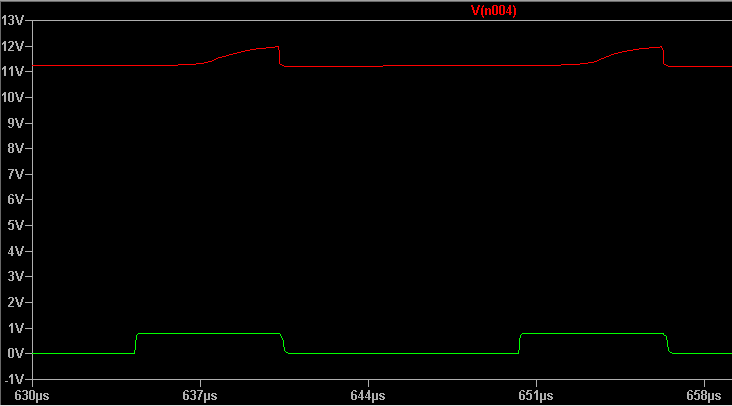 There's continuous base current route for Q3. It goes either via Q2 or R2+Q1 and it doesn't stop at all. Q3 conducts at the same time as Q1. ADD: no more that fault, the questioner fixed it in the question.

There's another error. The storage time of common emitter switching transistors makes Q3 and Q1 still conduct a moment at the same time. Storage effect means the Ic continues some time after the base current has been stopped. It can cause no special harm when the states change sparsely, but it causes easily high dissipation when the frequency is 10kHz or more.

I guess you are not going to accept the usual emitter followers due the voltage drop. Emitter follower would be free of the storage phenomena and a common driver would work for them. In common emitter switches you must limit the base current overdrive for ex. like in Schottky TTL, have speeding capacitors, have base discharge resistors and (as you seemingly already have noticed) have separated drivers for the output transistors to prevent the unwanted continuous base current path.

Bootstrapped emitter followers can do the job without too much voltage drop but that's essentially like adding a voltage booster to get more than 12V. That would allow the 1,5Vpp drop caused by the emitter followers and still leave nearly 12Vpp output.

Your own attempt can be developed a little. Here's an example: 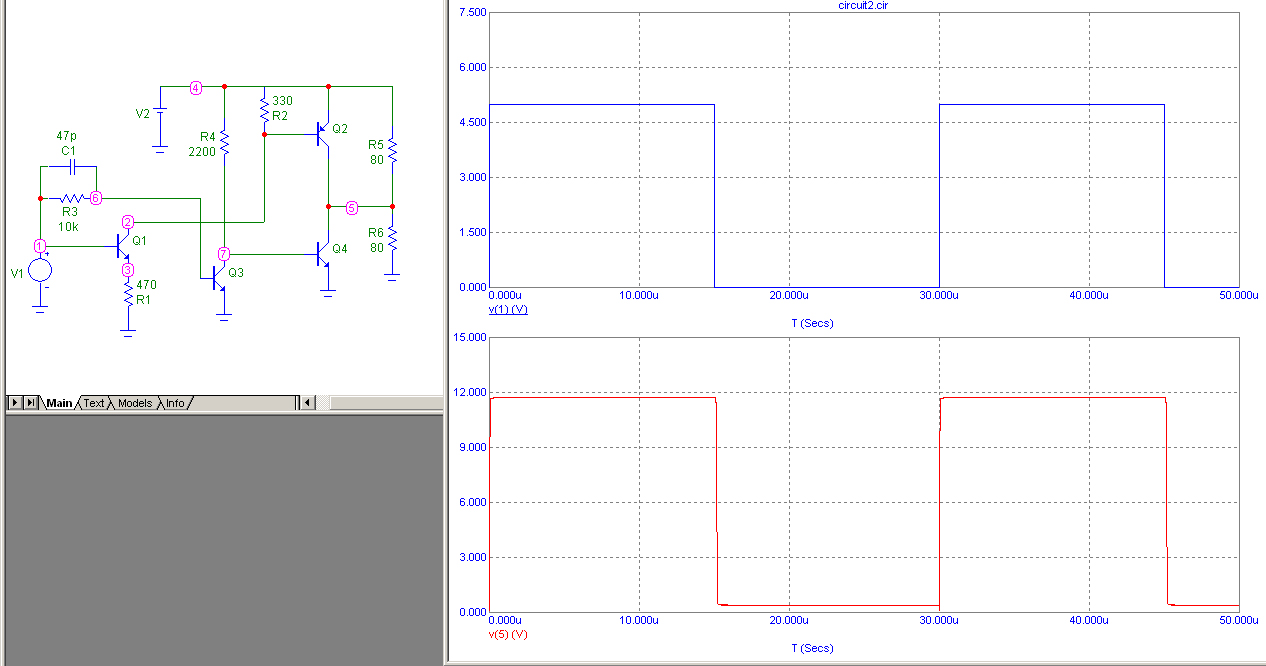 Some attention is paid to prevent excessive saturation and you see there's also a speeding capacitor. No Schottky clamp type tricks are used. For higher frequencies you maybe should use it and find higher spec transistors.

Not the answer you're looking for? Browse other questions tagged push-pull charge-pump or ask your own question.