There's two statements I have learned from school that seem to contradict each other with obvious examples.

The first statement statement doesn't make sense in regard to lightning or ground faults. This leads me to my question of the second statement. If I had a battery suspended, and took a conductor from the positive terminal (conventional current) and dug it into the ground, would current flow? I would think so as a potential difference has been created with a clear conductive path.

Your questions are ultimately about the distinction between circuit and charge models of electricity, and the degree to which certain things are best understood in the concept of one versus the other, though of course the underlying physical laws which those attempt to explain are the same regardless of situation.

The first statement statement doesn't make sense in regard to lightning

Lightning is typically thought of as being caused by an excess/deficit of charge in a region of the atmosphere relative to the earth. That's not particularly a "circuit" explanation, but one could also view the cloud-earth system as a giant capacitor suddenly shunted by the conducting plasma channel of the bolt, in which case there actually is a traditional circuit briefly in existence.

It's natural then to ask how the capacitor became charged in the first place. That's a very interesting question more in the realm of atmospheric science, but possible ideas for net charge beyond the air movements creating local concentrations might include slow diffusion of electrons / ions, or the fact that opposite polarity lightning happens too (wikipedia) - more rarely, but with typically an order of magnitude more charge transfer.

These actually are fairly simple circuit phenomenon, as the mains power system is referenced to literal ground stakes driven into the earth, meaning that the intended ground, the transformer secondary, and the "fault" ground form a complete circuit.

If I had a battery suspended, and took a conductor from the positive terminal (conventional current) and dug it into the ground, would current flow? I would think so as a potential difference has been created with a clear conductive path.

The key question you need to ask is if there is a potential difference between the positive terminal of the battery and the ground.

What the battery is intended to do is to create a potential difference (and one able to supply meaningful current) between the positive and negative terminals. There's no path to ground from the negative terminal, so in a circuit sense, no current will flow.

Of course just like a cloud, the battery could (and probably will, at least if you handle it with an insulating tool) initially have a net charge different from that of the earth, so much as in the lightning situation you could get a brief current flow when you initially connect the wire. But the charge on your battery will be tiny; the battery-earth system has little capacitance so this would be a very small, brief current. If you drag it across a carpet in winter, you might get a noticeable shock or spark from the discharge; in an unlucky case you could destroy the gate oxide of a delicate semiconductor like a MOSFET. But there's nothing in such a system which can provide a continuous current flow in the usual concept of circuits, because there is no complete path and no other mechanism to replenish the capacitive charge. Once the initial capacitance of the system is discharged by the wire, there is no longer any potential difference across it, and no more current will flow.

No, continuous current must flow in a loop. A potential difference and a path of finite resistance must exist for current to flow continuously.

If the battery was charged up with respect to ground a brief current might flow as the charge is equalized, like touching a doorknob after walking across a carpet (or a lightning strike), but after the static electricity is discharged there is no way for the electrons to leave the minus terminal of the battery without a conductive path, so the plus terminal will sit at ground potential and the minus terminal at -Vbat wrt ground.

To get a bit more picky, ordinary air is not infinitely high resistivity, but for most practical purposes it is close enough. Perhaps \$10^9\text{ to } 10^{15} \$ \$\Omega\$-m, which is about 20 +/-3 orders of magnitude higher than copper, so a tiny current would flow through the air (maybe of the order of a fA give or take a few orders of magnitude) but it would be dwarfed by the current along the battery surface and the much, much larger internal self-discharge current of the battery. With higher voltages than normally associated with batteries (kV or more) other effects come into play that can lead to much higher currents.

No. Both the positive and negative terminals would be required to be connected to earth for that to happen.

Statements 1 & 2 are satisfied only when the positive and the negative terminals of the battery are connected to earth.

The first statement statement doesn't make sense in regard to lightning or ground faults.

Current does return to its source in the case of a ground fault. 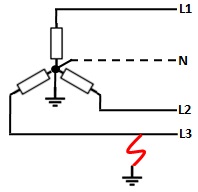 This statement is a simplification, which ignores the category of phenomena we call “electrostatic”. It would be better to say that a continuous current must return to its source.

Current is the flow of charges. Therefore, any current that does not flow in a complete loop ("return to its source") must be either increasing or reducing a charge imbalance (also known as a static charge), where some portion of the system contains more electrons than protons or vice versa.

As a charge imbalance increases, the electric field opposing it increases. Thus, eventually whatever process is causing the imbalance will not be able to increase the charge imbalance further, or something else will happen (such as an arc).

A typical example of a process which increases charge imbalance is an electrostatic generator such as a Van de Graaf generator, or rubbing your shoes on carpet — but it is also the case if you touch a piece of metal to one side of a battery, a current will flow momentarily and the piece of metal will be charged. But it'll only flow until the piece of metal is charged to at most the battery voltage, so this will not discharge the battery significantly. (And that much static charge is extremely hard to notice, because familiar electrostatic phenomena like static shocks involve hundreds of volts, and attempting to measure it with any conventional voltmeter will quickly discharge it.)

A famous machine operating in this fashion is the Oxford Electric Bell, a specific variation of Franklin bells, which consists of a pendulum (the “clapper”) hung between two electrodes (the bells) that are connected to a battery. The clapper touches the bells alternately, and each time it does this some electrons enter or leave it to equalize the charge between the clapper and that bell. Electrostatic attraction causes the clapper to swing between the two bells on its own, keeping the machine running. Because the amount of charge (and energy) transferred is so small, it has been operating with its original battery for over a hundred years.

(You can build your own Franklin bells out of common materials. Unfortunately the suggested safe source of high voltage, the face of a CRT television, is no longer a common household item. You might be able to get it to work a little bit with some carpet shuffling, though.)

A battery is "powered" by a chemical reaction that creates a potential difference between the terminals by "pushing" electrons from one terminal to the other. The reaction proceeds until the voltage between the terminals reaches some value that depends on the chemistry, and then it stops. If you complete a circuit (letting charge flow from one terminal to the other), the chemical reaction resumes, to keep that potential difference in place.

Since the terminals are real physical objects, there must be some amount of charge "stored" at the terminals of a disconnected battery — some number of electrons that had to be displaced to create the open-circuit voltage. But that amount of charge is very small compared to the amount that's "locked up" in the chemistry, to be released on demand. As a capacitor, a battery is a very, very small one.

After that, we have equilibrium. The positive terminal is at ground, so no current flows. The difference between the battery terminals is the 12V the chemistry dictates, so nothing happens there. The negative terminal is at -12V, but it has no path to ground, so no current flows. The only way to change this situation is to create a circuit by giving that -12V some way to reach ground potential.

Yes, but it will take several years.

73
What is ground and what does it do?
0
Questions about current flow, power supplies, and floating/grounded loads
0
Conductor interaction with single battery terminal
2
Silly question: using only the positive terminal on a battery
0
How can an electron have 0 electric potential after exiting a resistor but have current?
0
Power switch: leaving battery connected at one terminal
2
Isn't conventional current supposed to go from high potential to low potential ? If yes, then why this rule is not respected in opamp using AC?