In a lecture for an Electrical Engineering course I was taking, the professor did an example on solving a Thevenin circuit.

I would think that for both cases either it could only be added in parallel or series however this seems to not be the case. The only thing that changes is that now there is a voltage source and I am confused on how that has an effect on the calculation of resistance.

Picture for reference of solution: 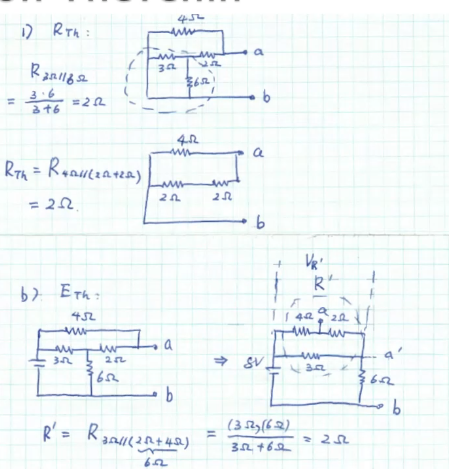 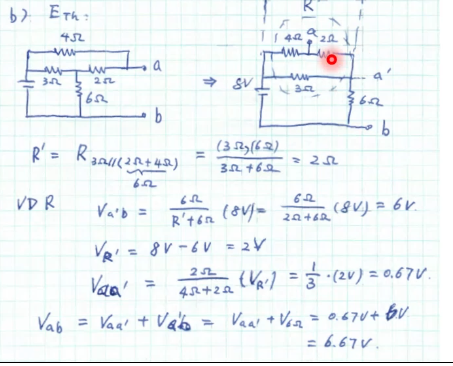 When reading what follows, keep in mind that you are always allowed to select one of the wires (nodes) and designate it as \$0\:\text{V}\$ (or ground.) That is your prerogative. In my work below, I've chosen to make b the same as ground.

One of the things that you need to learn early is to realize that our brains are often easily misled. Just get into the practice of patiently sitting down, getting out paper and pencil, and re-drawing what you see in a completely different way. Do this with intention. Make it radically different. But make sure that all the connections (nodes) are correct, of course.

You'll begin to see in a new way, soon enough.

You can now Thevenize \$R_1\$ and \$R_2\$ with \$V_1\$'s voltage. That resulting Thevenin resistance will be in series with \$R_4\$, so just add them. Now you have your \$V_1\$ source at one end of a voltage divider and your Thevenin source, \$V_x\$, at the other end. That means the final resulting Thevenin resistance will be those two values, the earlier result and \$R_3\$, taken in-parallel again. You can also easily compute the new Thevenin voltage from the divider pair, as well.

Not the answer you're looking for? Browse other questions tagged circuit-analysis parallel series or ask your own question.

31
How were schematics drawn before CAD?