I am learning RF electronics and I have the desire to start building real radio circuits with discrete components. So far I have just played with local oscillators (of course, without power amplification stages).

I would like to build a simple CW transmitting and receiving circuits that should work inside my house and I am very confused about the frequency I should use. Initially, I was considering the 27Mhz band because is free to use (my RC cars used to work in that band when I was a kid). However, my old oscilloscope has just 20Mhz bandwidth so won't able to debug my circuits and understand how they works.

That leads me to a lower one, I've think that 6.765MHz-6.795MHz ISM band should be OK, and even work on breadboards so I can iterate faster and experiment. However, I am still wondering if that is physically possible to make it work for very short distances like in my bench and without the requirement of large and complex antennas and just using a piece of wire of a selected a fraction of wavelength and at the same time using the lowest transmitting power as possible.

A short monopole will work fine if you have a half decent earth. Alternatively, a short dipole will work at either end of the link. At circa 6.8 MHz, the wavelength is about 44 metres and a quarter wave monopole will have a natural length of about 11 metres but, if you shorten it, it will still work but, with certain provisos: -

To understand what I'm saying consider this graph: - 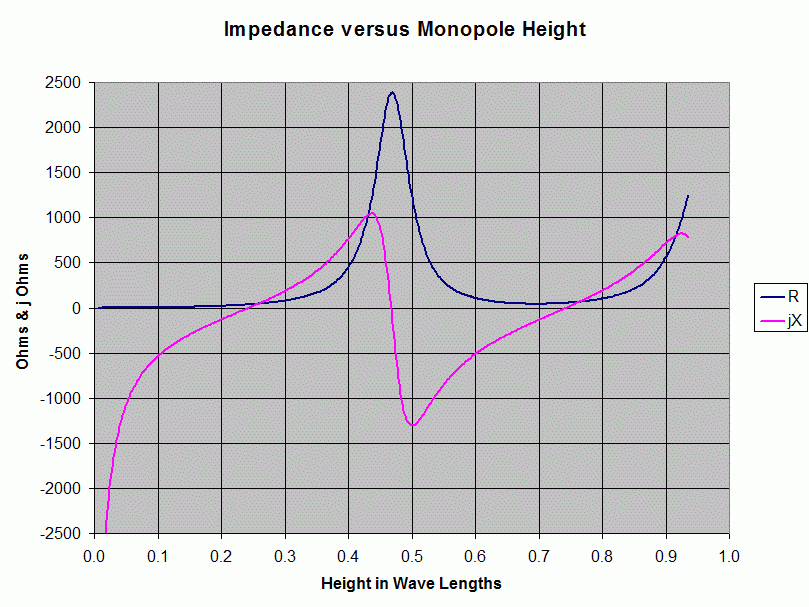 If you look along the x-axis at 0.25, the y-graphs indicate the resistive and reactive impedances of the monopole when used at a quarter wavelength. The radiation resistance is about 37 ohms and the reactance is nearly 0 ohms. This is regarded classically as the optimum length and corresponds to 11 metres at 6.8 MHz.

If you made a monopole that was one-fifth the length (2.2 metres) the radiation resistance will be an ohm (or thereabouts) but the antenna will look capacitive around 1000 ohms.

So, to get any power into a resistor of circa 1 ohm you need to: -

At these sorts of frequencies you are probably going to choose a step-down transformer and a series inductor for capacitive reactance cancellation. You will have to live with the antenna losses (about the same value as the radiation resistance).

The same theory applies at both ends; receiver and transmitter.

Here's a calculator you can use to estimate the radiation resistance, reactance and antenna efficiency.

Good luck and make sure you are only emitting sub milliwatts or you might get a knock on the door from the neighbours or even worse, the authorities.

A metre long piece of wire could serve as an antenna considering the short range required. A 3.3 mH series inductor, at the output terminal, could increase the range.

A portable AM receiver could be used to tune-in to the signal, which would be received with a hissing note. To get the CW beat note, a BFO or beat frequency oscillator, which is tuned to the IF of the receiver, would be required.

Otherwise, the signal would need to be 1 kHz tone modulated, for which an audio oscillator would be required.

Not the answer you're looking for? Browse other questions tagged rf frequency radio or ask your own question.