Will this circuit damage my Raspberry Pi GPIO?

I'm making a circuit te be able to shutdown my Raspberry Pi after the shutdown sequence is complete to avoid sd card corruption. The circuit looks like this: 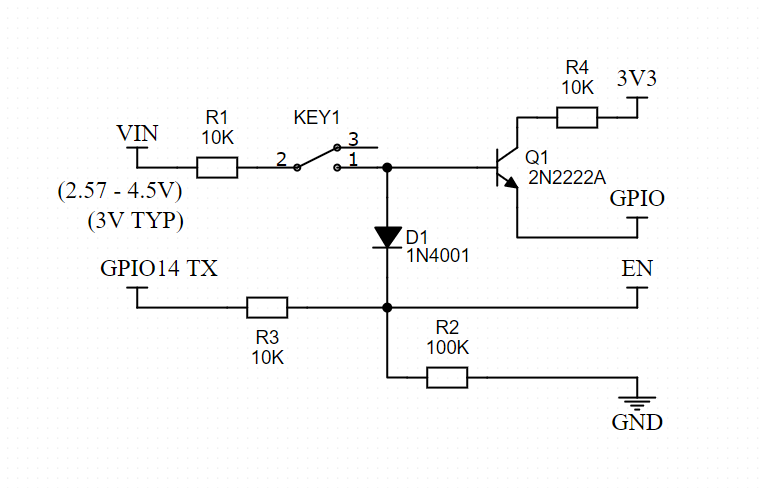 The battery input which is variable from 2,5 to 3,6V and 3V average, is controlled by the switch named KEY1. When the switch is activated, the input feeds EN and the system powers up. Because the switch output is connected to a transistor, it controls the state of the GPIO that will trigger the shutdown script once the switch goes OFF. The TX pin will feed those 3V to the EN pin keeping the Raspberry Pi on while the shutdown sequence is going and the switch has already switched OFF.

As you can see, the circuit already has some protection resistors, but my concern is: could the battery input (VIN) damage the TX GPIO pin when the switch is ON by feeding voltage into the GPIO PIN directly?

0
Using p-Channel MOSFET as a Switch to turn load on / off via BeagleBone Black GPIO
1
Auto shutdown and start of Raspberry Pi (remote application) using powerboot 1000c - need help debugging the circuit
0
Safe shutdown circuitry for Raspberry Pi Zero with Adafruit TPL5111
0
What role does a FET play when working with GPIO pins on a Raspberry Pi?
0
Receive same GPIO input signal on multiple raspberry's from one source
0
Battery switchover circuit when battery is being charged
0
Low current RPi GPIO inverter
2
Can I Use a Transformer to feed a Mains current to a RPI GPIO pin
0
Running a N channel MOSFET from 3.3V MCU