Will relays work to build a physical ethernet "killswitch"

In order to incorporate a networked device into an automated test framework, I am looking at building a small number of ethernet "killswitch" boards that will simulate physically disconnecting the device.

In order to keep things simple and cheap, I'm hoping to use either a single or pair of relays to switch one core of one of both of the ethernet pairs. Normally the entire board will be unpowered. Application of a 5V signal will switch the relays(s) to the NO position and break the connection.

I'm a competent electronic engineer, but I don't really know anything about the details of ethernet. This is 100Mbps ethernet (not gigabit).

Depends on what you are testing, but Ethernet should really have controlled 100 ohm differential impedance, so a random big clunky relay in the middle would break that property. Also PCB trace lengths should be matched.

There are some RF relays that can be used for this, and in fact not entirely RF rated relays have worked fine with 16-level 500 Msymbols/sec PAM interface.

Perhaps in your case it would be best to make a device with Ethernet magnetics at input and output, and put an analog mux between the transformers, and make sure the analog mux can switch at Ethernet speeds. That's how some PC laptop docking stations work. These analog muxes for Ethernet are also called "LAN signal switch chips" to distinguish them from the actual switch chips.

A few years ago, where I work, we've been asked to provide such a device to a customer, who was testing some ring redundancy protocols in industrial Ethernet. He tried using media converters for the job, and got skewed results. The ring switch vendor claimed that any media converter (same thing for a dumb switch), inserted in the L2 links involved in the ring path, will break subtle aspects of the protocol (even if it doesn't eat the specific management frames outright) and will yield weird behavior, which will make the automated test fail.

The Ethernet flavour at the time was 100Mb as well = just two pairs and the required bandwidth is something under 100 MHz. The relay I used was an RY-12W by Takamisawa, which is specifically a signal relay. I recall taking special care to find a relay that should be able to pass the bandwidth through. In my case, I believe the relays are connected "normally open", and the contacts close = link gets connected when power is applied to relay coils. The schematic and board are not much to write home about, I can do better now. Each switching device actually had a small mains power supply transformer, because the "test lab" preferred to switch 230V AC as a control voltage (it fitted into the original design of their test rig). I'm attaching screenshots for illustration, the eagle source is available upon request... 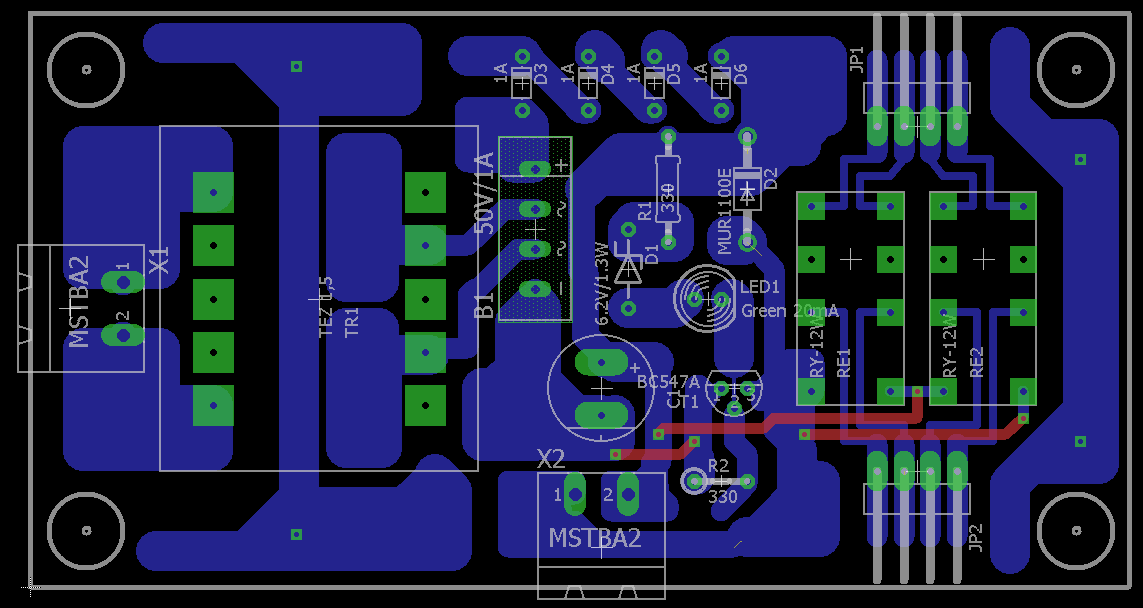 Come to think about it, the sin on part of the testlab could've been, that they used the media converters in pairs, and perhaps the opposite converter did not get powered down and did not support link fault passthrough, i.e. the link would remain apparently up. Or maybe it was indeed something about the management frames... Anyway after rewiring the test bench using our relay switches, the ring topology under test started to pass.

The 100Mb Ethernet needs just two pairs - at pins 1+2 and 3+6 in the RJ45 (typically the orange and green pair in standard B color coding) and needs about 60 MHz of bandwidth. Gigabit Ethernet OTOH runs over all four pairs and needs slightly more bandwidth - some sources claim 125 MHz.

And you may be right that having the link cleanly broken across all the conductors may not be the typical failure scenario. Cold joints would typically result in a gradual decline of transmission line quality in a single pair. Miscellaneous crimping errors typically affect a single pair too.

Such devices were used in legacy gateways to high security environments where they periodically switched a simple and assured messaging proxy between high and low side environments where two way message traffic was required; but to prevent a direct path. These 'break before make switches' used a relay to simply break the two active ethernet pairs from one side, and then made them to the 'other side' where ethernet physical protocols and DHCP sorted out the rest. Ethernet at 10Mbit/s worked very well, and 100Mbit/s was at times a bit flaky. To get these to work reliably and force the physical layer to 10Mbit/s a small Netgear hub on the common part worked well. If working at higher speeds you will need to maintain the transmission line characteristics and avoid reflections which will be horrendous from such a relay: I suggest that any such relay is physically very close (centimetres) from a small switch on either side of the relay. Obviously if using this in high EMF strength environments the earthing of all sides is important.

For the soldering iron junkies: to reduce reflections this would best be created as a classic birds nest with no circuit board and the ethernet twisted pairs soldered direct to the relay terminals, then place into a box and pour in the epoxy potting compound. It will then look soooo professional, and work!

Another technique would be to use a fibre LAN connector and simply break the optical path in some way. This is very similar to how data diodes work, where there is only a data path in one direction and UDP traffic is used.

4
How to connect Ethernet Switch IC with ARM9 CPU
7
How do Tx / Rx cable pairs work in an Ethernet cable?
0
Ethernet (100 Mb/s) through relays
1
Gigabit Ethernet Coupler Design
1
Using only 2 pairs of Ethernet
0
Why does my ethernet on my custom board only work sometimes?
0
Can a PoE type Gigabit Ethernet Transformer be used in a non PoE application?
2
Passive Ethernet-over-coax converters... how do they work?
2
Best configuration for ethernet-as-speaker-wire?