Help with an Mbed LCP1768 assignment 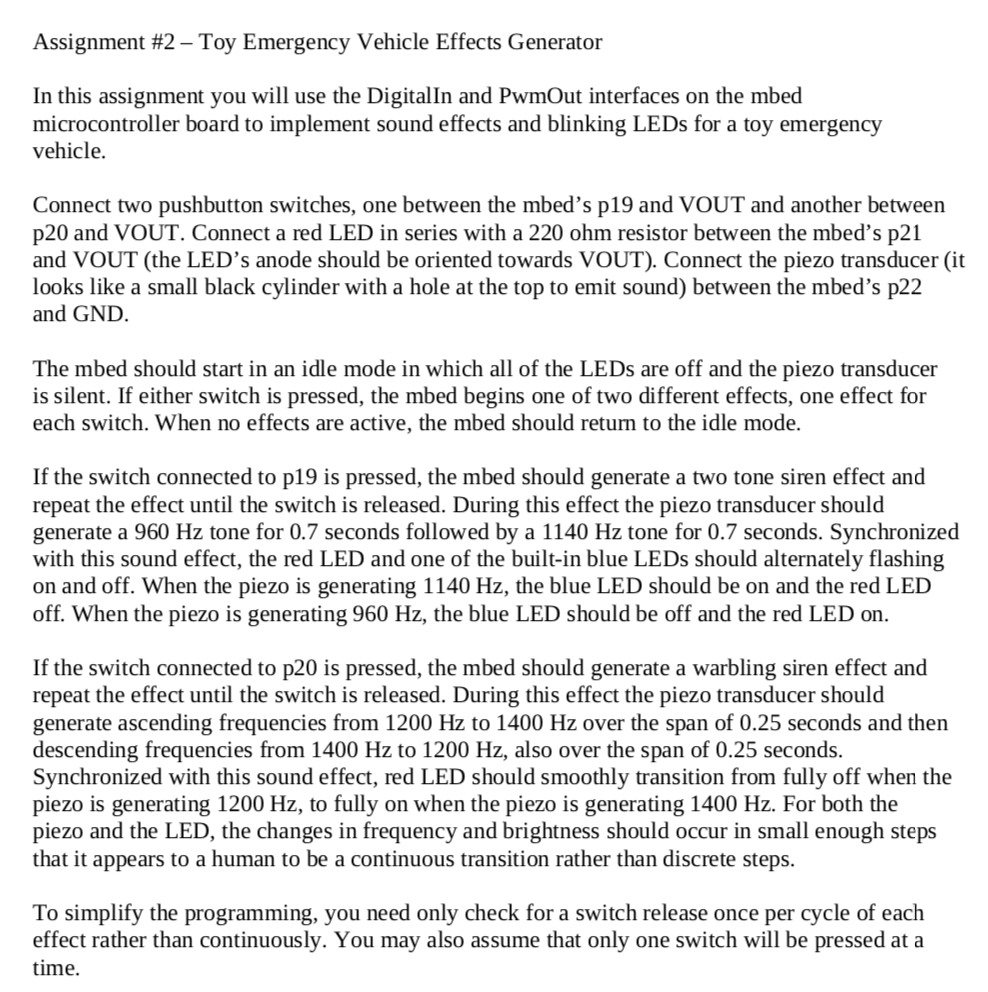 Could someone help me out and see if my code is correct please and thank you.

If you're using the online mbed.com compiler, fix the indentation by using the shortcut CTRL+SHIFT+F (or use the right-click menu Format Code). Otherwise if you're using the mbed cli there are linters such as uncrustify that enforce uniform indentation rules for you. Programmer's equivalent to spellcheck, it helps catch typos and other errors.

Then in the state machine logic, add comments that tie the logic back to the stated requirements:

With the software structured this way, it's easy to test/validate/debug the effects separately from testing the state machine logic. If for example the p20 switch press was causing the two-tone siren effect, or if the p19 switch only worked immediately after the p20 switch, then you would know the issue was in the state machine control logic and not the siren effect. If on the other hand the siren effects don't sound right, then you know the problem is in the corresponding effect_siren_twoTone or effect_siren_warble function. That could be debugged by temporarily replacing main() with a simpler main() { while(1) { effect_siren_twoTone(); } } to test a single effect isolated from the buttons/state-machine logic. Naturally keep a backup of the sources! mbed-cli uses mercurial (hg) for source control, you can use hg commit to save a backup copy and hg update to restore previous versions...

Not the answer you're looking for? Browse other questions tagged mbed code lpc1768 or ask your own question.

1
using mbed with gps
1
mbed LPC1768 with optocoupler for 5 V output
2
How fast is mbed Digital Out
2
Mbed OS efficiency
3
What are these exposed copper rectangles for on the mbed NXP LPC1768?
0
Using SysTick_Handler in mbed LPC1768 project
1
mbed SPI in Ticker function
0
Problems with mbed LPC1768 double precision