I am trying to design a circuit that gives me an underdamped sine wave.

I am controlling the SCR from an external transformer by microcontroller.

When I simulate this circuit, V3 has no effect on the circuit. I mean the capacitor is not getting charged to lets say 50V to oscillate. Instead, it seems it is oscillating with V2 and the transformer. I don't know if it is the proper way to make an oscillator circuit.

(Sine wave frequency and switching frequency is not important for now.)

The charging source for the capacitor should be floating during the expected oscillation. The series switch unfortunately must be there. It's losses kill the oscillation very soon except if there's enough charged energy available.

To make a working circuit I increased the inductance radically from your 50uH to keep the max current reasonably small for low cost parts. The capacitance is also increased for more charged energy.

The voltage drop is hundreds of millivolts in semiconductor switches. You can see how fast the oscillation decays due that drop. Reducing inductance increases the current and the charged energy can be used before low cost switches turn their state fully. Simulation is your way to check the situation if you avoid calculations.

Q2 starts to conduct and L1C1 oscillates. The recharging of C1 happens when V1 is again 0V.

The inductor is ideal in this simulation. The resistance and possible iron core losses of a practical inductor would make the decay of the oscillation substantially faster.

You wrote you are going to put a 50 Ohm load. That's not impossible, actually I guess you have already done some calculations which show that 50uH & 6uF resonator can in theory oscillate substantially a long time with that load and 50V intial charging voltage:

NOTE: Battery V1 is the marker for the initial 50V without using state variable edits, do not expect you can use that idea in a real circuit because the current should be possible to both directions.

But insert some voltage loss in the switch. The current is so high that normal diode voltage drop dissipates the energy in few cycles: 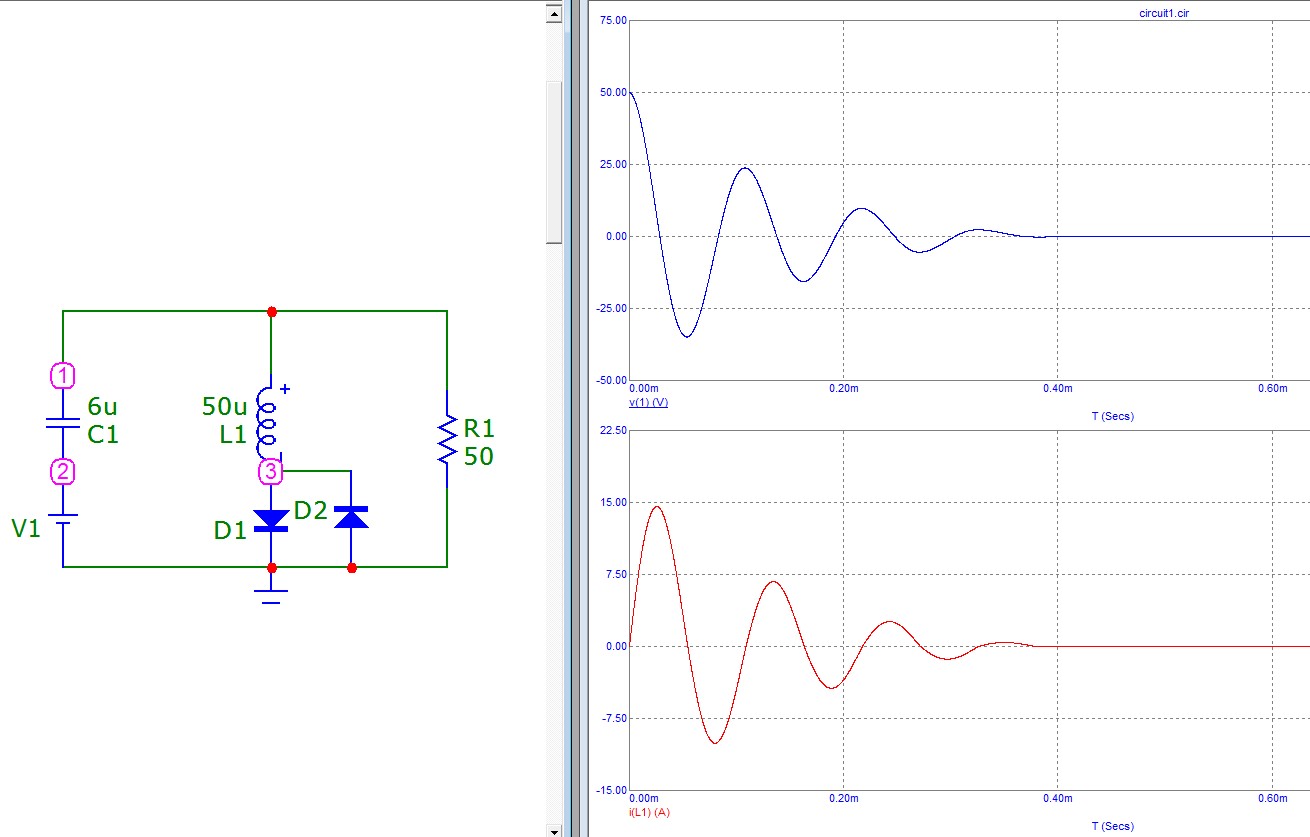 To sustain the oscillation longer you must either have a low drop switch or work with much lower current. Current reduction keeping the voltage needs higher inductance. That affects the oscillation frequency.

Another way to sustain the oscillation is to leave the semiconductor switch out of the oscillation current path. Charge the initial energy as inductor current. Turn the switch OFF to start the oscillation. You do not need especially high voltage because the 50uH coil can be made of thick wire.

But your DC source must be able to output say 18A. You connect the parallel resonant circuit with a transistor to a DC source. The transistor must be current limited to 18A. After the inductor current has risen to 18A you turn the transistor suddenly OFF and the oscillation starts.

The current must be limited because otherwise the capacitor in parallel with the inductor would short the DC source. It cannot have a switch due the losses.

I must admit I do not know enough of your whole case. An amplified circuit would output those bursts with much less hassle.

Not the answer you're looking for? Browse other questions tagged sine thyristor scr or ask your own question.