Before explaining my question, I'm going to assume that 1) interharmonics, just like harmonics, are sinusoids; and 2) to analytically represent the interharmonics of a signal, we sum them to the Fourier series. This was discussed in this previous question. If any of these assumptions is wrong, please say it and preferably share a reliable source. If these assumptions are true, then we can express a periodic signal \$x(t)\$ using the amplitude-phase form of Fourier series, with \$k\$ interharmonics, as follows (correct me if I'm wrong):

However, the sum of sinusoids of different frequency, whose frequencies aren't irrational numbers, results in a periodic signal, which means that in equation (1), \$x(t)\$ is periodic. And since the signal is periodic, we could compute its Fourier series considering the interharmonics, such that we get no interharmonics in the end (this is illustrated in the following example.) In other words, in equation (1), the terms I've labeled as DC component and infinite harmonics, aren't really the Fourier series of \$x(t)\$. Therefore, the fundamental frequency of \$x(t)\$ isn't \$f_0\$ as we'd think from the first summation; for the same reason, the first summation isn't really the harmonics of \$x(t)\$. This is also illustrated below.

It can be proved its Fourier series is: 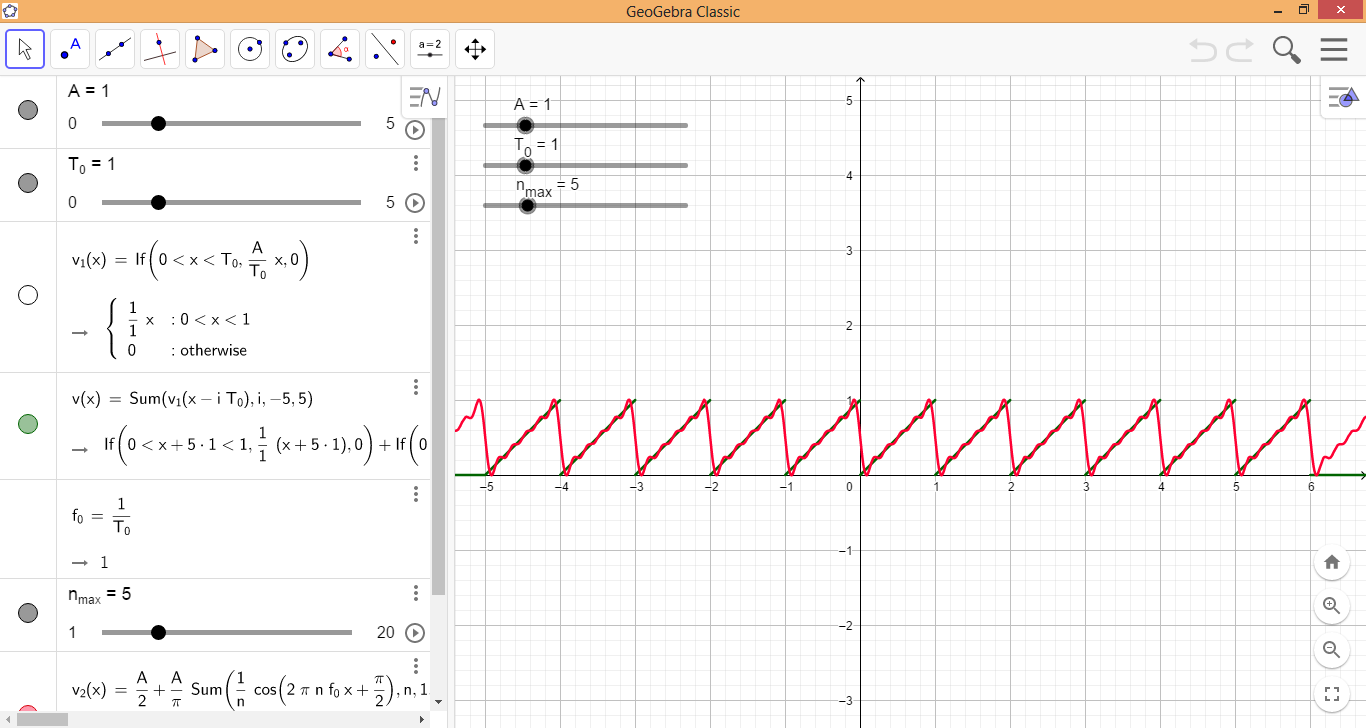 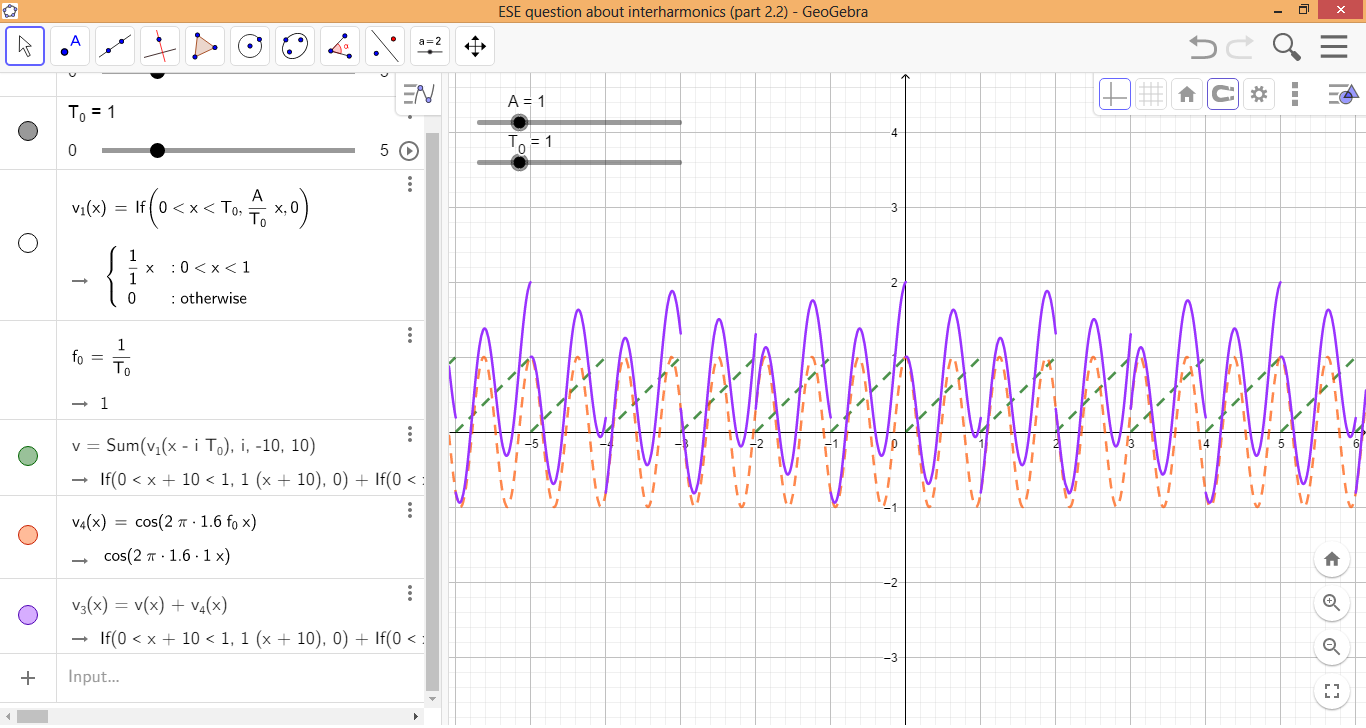 The following image proves the previous expression, where the original signal \$v_3(t)\$ is shown in blue (given by equations (6), (2) and (3)) and its Fourier series approximation in yellow (given by equation (7)): 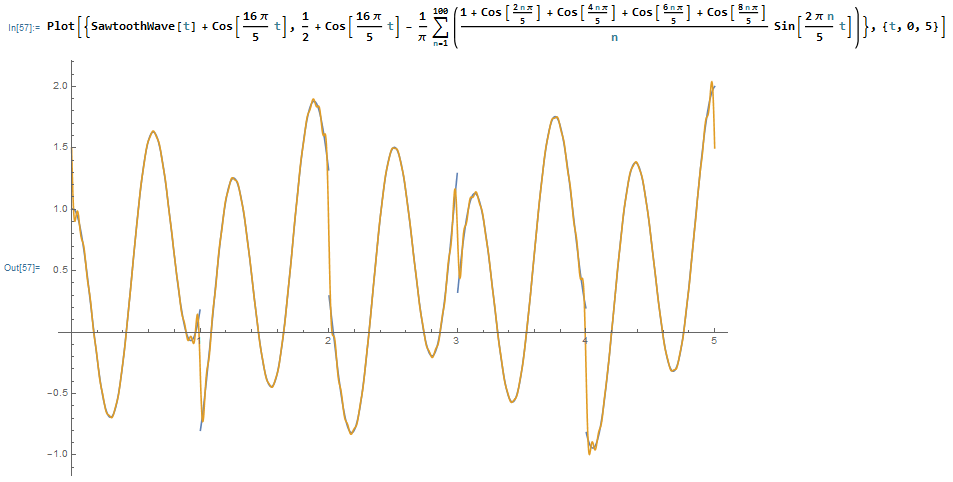 While both equations (5) and (7) correctly represent \$ v_3(t)\$, the former is misleading for the reasons I explained in the previous paragraph. Also, notice initially we thought \$v_3(t)\$ had an interharmonic of 1.6 Hz according to equation (5), however, in equation (7) there're no interharmonics. So, if the assumptions said in the first paragraph are true, then interharmonics are misleading (if you think otherwise, please explain why.) And this makes me wonder why are they even defined by IEEE and IEC.

Viewing them this way is equally valid to the approach you elucidate above (with LCM and GCD to find the true fundamental/period).

Not the answer you're looking for? Browse other questions tagged fourier harmonics non-linear power-quality or ask your own question.

4
When a signal has an interharmonic, is the signal periodic or non-periodic?

3
DC level in Fourier series
2
Amplitude and phase spectra of fourier series
2
What are values of fundamental frequency and the harmonics for the below signal g(t)?
1
Is there any simple way or trick to express given signal using waveforms of sum of simple sinusoidal signals?
1
Impulse Response of a circuit
3
plotting dirac delta function using inverse Fourier transform
4
When a signal has an interharmonic, is the signal periodic or non-periodic?