What exactly does a diode do?

As explained in other answers here, current in a circuit doesn't flow from negative to positive and the direction doesn't matter.

So what should I make of diodes, which are supposed to make the current flow only in one direction?

The other question is about the fact that current flows in complete circuits --- there is no current without a complete loop for current to flow through. Some of the answers went off on a tangent discussing the difference between electron current and conventional current. In circuit design, you can safely ignore electron current, and always think in terms of conventional current. But the direction of current flow absolutely does matter.

As for diodes, ideally, a diode allows current to flow through it in only one direction, from anode to cathode. Specifically, above a certain "threshold" voltage, it only requires a very small increase in voltage to increase the current to astronomical levels: 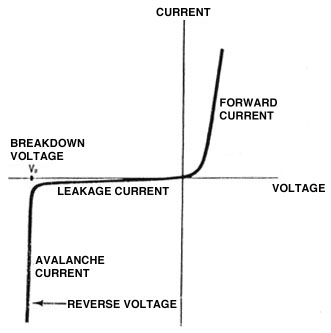 The reverse breakdown behavior (large reverse current when high reverse bias is applied) is normally considered a non-ideality rather than part of the ideal diode behavior.

Some diodes have other effects, such as LEDs, which emit light when current flows through them; or zener diodes which are normally used in the reverse breakdown region.

what's the purpose of including a garden-variety diode (not an LED) in a circuit?

Typically, you use them when you want to be sure current can only flow in one direction. For example,

In circuits using ac signals, proper manipulation of the dc bias point of a diode allows it to be used as a switch to route those signals.

You might also see a diode used in cases where the designer knows that current will be flowing in the proper direction to create a rough-and-ready "fixed" voltage drop of about 0.7 V.

Another use is to use a (properly designed) diode's ability to sink large amounts of current (in the forward direction) to protect more sensitive circuits from overload or ESD conditions, or in a snubber circuit to reduce transmission line ring.

Another use is that, going beyond the dc properties, a diode in reverse bias has a variable capacitance depending on the magnitude of the bias. This variable capacitance can be used to tune oscillators or filters. Diodes specially designed for this use are called varicaps.

For a beginner, the basic answer is that a diode is a one way valve for current. Of course none of them are perfect. There will still be a little bit of pressure (voltage) accross the valve even when current is flowing in the forward direction, and there is some amount of backwards pressure (reverse voltage) at which the thing breaks, but "one way valve for current" is most of what you need to know to get started.

After you get into this a bit more, then go back and look at Photon's answer and see all the nasty little details of real diodes. For now though, I think that will confuse more than illuminate.

One way valves for current are useful in a variety of circumstances. One obvious one is to make a DC power supply from AC.

A diode always allows current through in one way only. It has 2 electrodes, an anode and a cathode. Usually you use them when you want to be sure that the current can only flow in one direction. For example: - to protect a circuit from a battery being installed in reverse. - to form a full-bridge rectifier circuit (using 4 diodes) to convert AC power to D.C.

Not the answer you're looking for? Browse other questions tagged current diodes or ask your own question.

0
How does a diode work?
11
Does electricity go from negative to positive or vice versa?
0
Flow of electrons
0
I know the operation of the diode but I still can't understand how it works
0
What is the difference between rectifier/signal diode and zener diode?
-2
Why does the circuits work with conventional current?
0
Current flow with a Diode
0
optoisolator triggered by arduino

3
1N5819 diode reading?
2
How exactly does a capacitor discharge its charge?
0
What is the difference between rectifier/signal diode and zener diode?
36
How does current get into a diode?
1
How to solve a simple diode gate question from Sedra and Smith (Exercise 4.4)?
1
Function of diode in the following circuit schematic?
4
Confusion about conventional current and electron flow and how it runs through and powers a circuit
0
How to determine the correct polarity of the diode
1
What's this diode symbol?