What is the absolute maximum temperature of a ceramic capacitor while not operating? (non-operational maximum)

There are a lot of capacitors in my system but the ones in question are all ceramic caps rated to +85ºC operational. The following is a datasheet for an actual cap from the system which should be representative: cl03a104kp3nnnc capacitor datasheet

The best answers will be supported with facts and provide a method to determine the maximum non-operational temperature based on known factors (use the provided datasheet for knowns). That said, I would also appreciate a rule of thumb as a bonus. My gut feel is that as long as the solder doesn't melt the cap will be fine but I'd be happy to hear how others feel.

Follow-up: Just to be clear, when I say "non-operational" I mean that the system is assembled and in a real environment but the system is off. This is not shelf storage.

With material degradation due to over-temperature, you won't find any hard and fast rules. Why? Because the material degradation depends on a curve that increase with temperature. The curve deals with mechanical and chemical changes that happen, most of these effects are known by manufacturers and sometimes they will share this data, but you have to ask. Most users don't need this and so only rated temperatures are provided. Let's dig into what we know about the temperature of the part.

Almost any electronic part (and this cap) can be put through 260C for at least 30sec and follow a reflow profile like this: 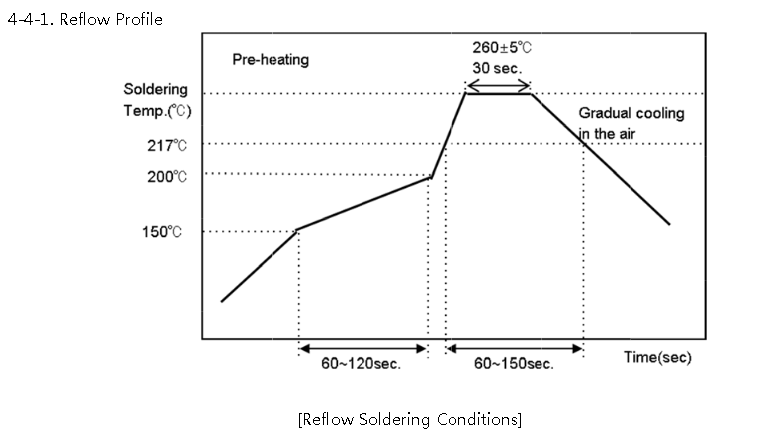 From this we know that the part can survive 260C, but the manufacturer doesn't want the part to dwell at that temperature for more than 30s.

The temperature of 150C for 1 hr is okay and then the part degrades over it's lifetime for a X5R or less so for an X7R and almost no degradation over lifetime for a C0G.

The other disappointing thing is we don't know (from the datasheet) if extending the time spent a 150C further degrades the part (double the degradation over time), only one test is shown.

So from this I would personally surmise that I don't want this part to get to 150C for more than 1hr. Also it should be noted that an X7R or C0G (which generally have higher operating temperature ratings) do not degrade with time and support 125C operating ranges in most cases. So I would go with a higher temperature rated part or contact the manufacturer. If cost is an issue then finding the rating would be a good idea, if cost is not then just go with the X7R or C0G.

Also the application is also worth considering, if this is for a bypass cap, then tolerance does not need to be accounted for in most cases, conversely a filter application (DC DC converter or analog filter does need a high tolerance part).

A simple practical suggestion would be maybe 100C. I'd expect it to vary with manufacturer, dielectric and construction FWIW. e.g. from AVX (operating temperature) 'Operating Temperature Range (ºC): Phenolic Coated -30... +85 Epoxy Coated -30... +125 So the encapsulation sets the upper limit, not the dielectric.

Do your data sheets not include storage conditions ? I suspect that in storage the main concern is getting damp.

A search shows you're not the first to ask this. Capacitor Storage Temperature vs Rated temperature

Digikey says ... Conventional X7R and X8R type ceramic capacitors are designed for applications up to 125°C and 150°C, respectively. At temperatures above 150°C, these types of capacitors typically suffer from degradation of reliability performance and severe reduction in capacitance, especially under DC bias conditions but this only seems to refer to operational use.

I doubt you'll find a 'fits all' answer never mind one based on 'facts' which may prove elusive !

Not the answer you're looking for? Browse other questions tagged capacitor temperature or ask your own question.

14
Ceramic or electrolytic capacitors for a switching buck regulator?
6
Hot capacitors: Is that a problem?
8
Aluminum Electrolytic Capacitor Dissipation Factor
3
What are the risks removing sleeve off the aluminium electrolytic capacitor?
0
Capacitor Storage Temperature vs Rated temperature
1
Are circuits damaged by a constant 55°C environment?
9
If temperature is not an issue, what can be said about the different ceramic dielectrics
1
Using PP film or PET film as active filter stage capacitors
1
Why do bare die chips (MOSFET) have a maximum storage temperature?
0
What can make a ceramic capacitor blow?