What is the “positive charge” on a capacitor if only electrons and not protons flow through a circuit?

Speaking in non-conventional current terminology, electrons should build up from the positive terminal of power supply to the top plate of a capacitor. What I don't get is, from an atomic perspective, how an electric field is created since the capacitor is given no "positive" charge from protons.

An excess of electrons on any plate gives a negative charge.

A Scaricity of electrons on any plate gives a positive charge.

When we talk about a capacitor, the overall charge on the capacitor is zero (if you consider both plates). What happens is - some electrons of one plate move to the second plate thereby giving you a positively charged plate and a negatively charged plate.

When you discharge the capacitor, those excess electrons from the negative plate return back to the positive plate and both plates become neutral. 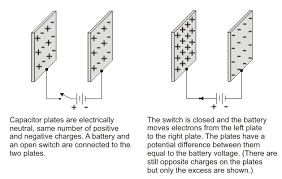 To put some numbers on this, consider a capacitor whose plates are 1 square metre, and with a separation of 10 um. The standard capacitance formula of C=Ae/d gives a capacitance of about 1 uF, assuming a vacuum dielectric.

Let's say the metalisation is aluminium, with a unit cell dimension of 0.4 nm. If we count the number of atoms on the surface layer of the electrodes, it comes to 1/(0.4 n)2 = 6.3e18. There are many more atoms in the film, but let's only consider the surface monolayer. As each atom has 13 electrons and 13 neutrons, that's a total charge of (surprisingly, I picked 1 m2 and Al first) 13 Coulombs each of proton and electron charge. However, only the outermost electron is freely available to move in the conduction band, so that's 1 C of mobile charge.

Let's charge the capacitor to 1 kV. As Q = CV, that's 1 mC. So 0.1% of the mobile electronic charge has left the positive plate, which stops it neutralising 1 mC of the total 13 C nuclear charge. Meanwhile, 1 mC of electrons have arrived on the negative plate, leaving the capacitor overall neutral.

Not the answer you're looking for? Browse other questions tagged capacitor current or ask your own question.