I'm planning a project involving the ADNS-5050 optical mouse sensor package. The data sheet for this package says that it needs to be combined with 4 capacitors, and it has a diagramme that I think is supposed to tell me what capacitors to use, but I don't have a great deal of experience with electronics and don't know exactly how to interpret it.

The relevant part of the diagramme is: 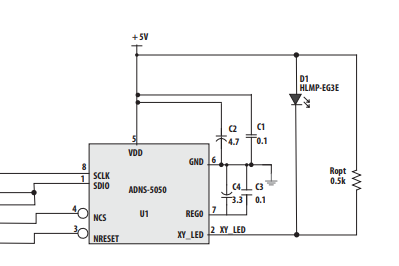 As far as I can tell, the document does not elaborate on these four capacitors. Obviously, the 0.1, 3.3 and 4.7 are measures of capacitance, but I don't know what the units are, or even if they are all the same units. I do recognize from the symbols that two of them are polarized and two are non-polarized, but I am kind of floundering at figuring out what exactly I need to hook up.

What capacitors exactly is this diagramme calling for, and how might I have figured it out by myself? :-)

That's a terrible diagram, it should really say what the units of these are. (also, when you compare the symbol of C1 and C3, it seems like it wasn't drawn with software that has component symbols, but by hand ... not a good sign for documentation quality.)

However, seeing the values: Unit is most likely µF. Watch out, C2 and C4 are polarized caps (i.e. electrolytic ones) and thus their orientation matters.

Also, note that if a device needs both such large capacitances as 3.3 µF and 4.7 µF in electrolytic capacitors as well as high-frequency 0.1 µF (= 100 nF) capacitors, at least the ceramic capacitors should be placed very close to the chip. (The schematic "suggests" that wrong, and this raises even more questions about documentation quality).

The company was later bought by Avago, then that got bought by Broadcom. They reworked the datasheets for most devices from the ADNS-series, but it seems they never got around to fixing the ADNS-5050 data sheet schematics. It's not the same device, so don't take anything said there as true, but you might want to also browse the Broadcom ADNS-5070 datasheet if any concepts remain unexplained in the ADNS-5050 datasheet.

Not the answer you're looking for? Browse other questions tagged capacitor diagram mouse optical or ask your own question.

3
Capacitor to provide power to a circuit during a very small interruption
0
PCB Design Finding Part Equivalents
0
Italic or upgright font for circuit components
1
Is it D-Type Flip Flop?
35
Cross section of ceramic capacitors
0
what size/kind of capacitor is needed 12VDC automotive
7
What does "Bypass capacitors on both sides of the package" mean?
2
Non-Polarized Electrolytic Capacitor Replacement
0
Identifying components on circuit diagram