The issue I'm seeing is the following: when no voltage is applied to the base of the transistor, then current flows, normally, through the path including the collector (as it should). However, when voltage is applied to the base, then current still flows through the path of the collector (should not). In other words, I always get high output, no matter what.

Question: I would like to find out is what I'm doing wrong, or what is wrong with my (still very limited) understanding of how the circuit should work.

This is the circuit we are trying to build: 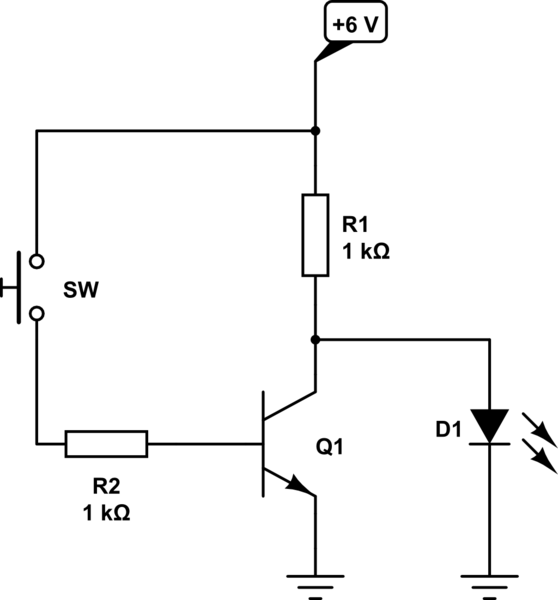 This is how it is supposed to work (in my understanding):

My circuit is slightly different, because I have different parts (in particular, I don't have any jumper cables yet), and also because I added some extra leds to try to "debug" the problem. I realize that these extra leds add more resistance (and previously I was using real resistance, where tutorial said to use a jumper cable), but I'm not sure if that matters or not.

This is the circuit (I think) I built: 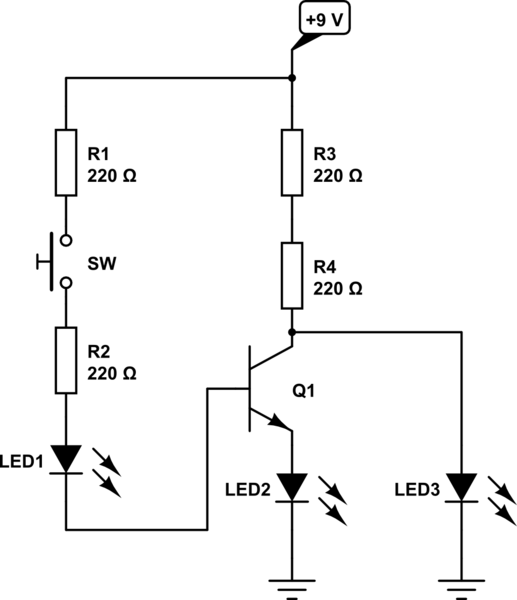 And this is what is happening:

(N.B.: I was seeing the same problem even before adding the extra "debugging" LED's, i.e. LED3 was always lit up, independently of the state of the switch.)

Pics of the board 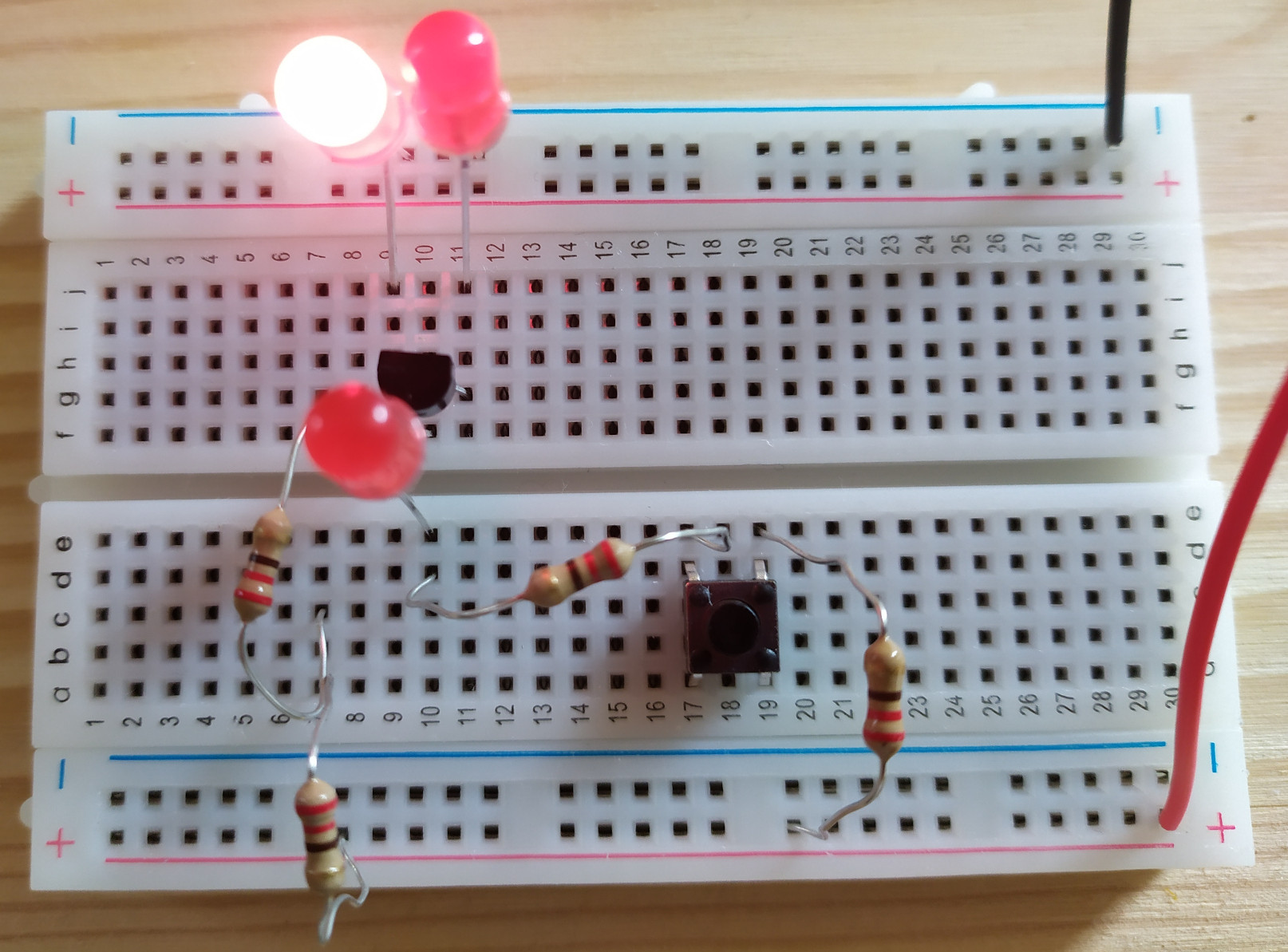 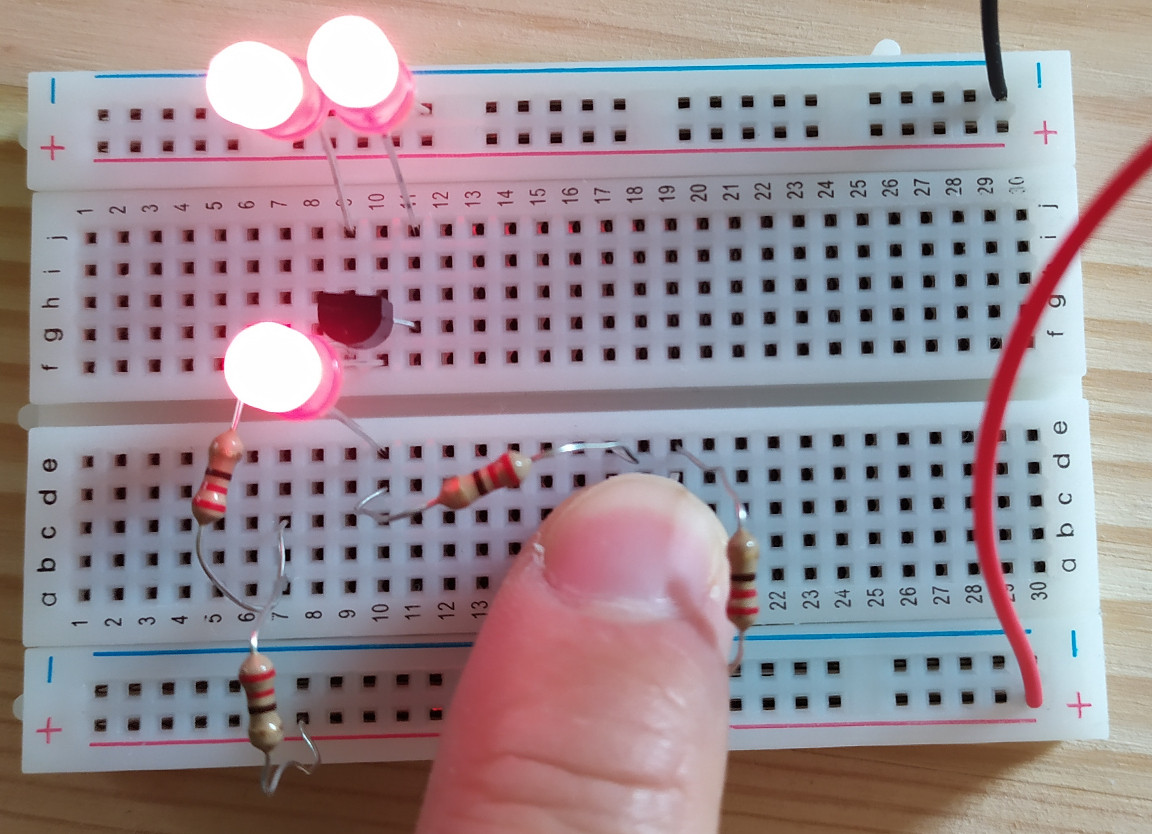 This answer (to the related question) seems relevant.

What you have done is connect the emitter to ground, and the collector to ground via a resistor. You have then applied a voltage to the base.

Yes, I did the same, with the exception that I connected the emitter to ground through a resistor (either the LED2 or the 220 Ω resistor I was using before due to the lack of jumper cable -- I'm not sure if that matters, though).

However in your case, the collector is not at a higher potential than the base, it is at a lower potential. [...] You now have current flowing from the base to the cathode, through the resistor to ground, thus the mysterious current flow is identified.

Could this be the reason in my case too? I don't know how to calculate the potential at the collector, and at the base, but I compared my circuit to the one of the tutorial, and these are my conclusions:

One more thing: I'm fairly sure that I connected the transistor the right way, but I tried the other way round too, just in case (same result).

If you take out LED2 and connect the emitter to ground again, the circuit will work as expected.

The problem is (I think) with your LED2. In the original tutorial, there is no LED in series with the transistor, which makes the circuit works like this:

Now, you've added a LED2 in series with Q1, which makes their combined forward voltage(yes diode in series gets combined) HIGHER THAN LED1, which means electrons will always go through LED1 regardless of Q1.

The problem you have relates to the voltage at the collector of Q1.

The purpose of Q1 is to short out LED3 when it's ON. As a consequence when LED2 is on, LED3 should be off and vice versa.

Now look at the voltages when Q1 is ON. LED2 will have a forward voltage of typically ~ 1.8V. Q1 will be saturated and have a Vce of ~ 0.2V (for a typical small-signal silicon transistor). These voltages are in series and up to 2.0V.

BUT, the voltage at Q1's collector is applied to LED3. 2V is enough to make LED3 conduct and as a result it never 'goes out'. In reality, some current is probably diverted from LED3 but not much.

Adding a small signal diode e.g. 1N4148 in series with LED3 increases the conduction voltage of the path including LED3 by ~ 0.7V. This is enough to stop LED3 illuminating when Q1 is on.

Removing LED2 would have a similar effect.

Try putting another LED or two in series with LED3, and see if that adjusts the voltages enough to make it work.

Not the answer you're looking for? Browse other questions tagged transistors led breadboard or ask your own question.

0
In a NOT gate circuit, does charge not flow through both the transistor and output line when the transistor is "on"?
5
Help understanding circuit in Forrest Mims' Getting Started in Electronics
2
Different LED for POWER ON and for LOAD ON, how to wire?
0
NPN Transistor not working
3
Why transistor doesn't oscillate in this configuration?
0
Constant Current Regulator position in a series circuit
17
Why isn't the current split between the transistor and the LED in this NOT transistor circuit?
1
NE555 - astable flashing alternative LED circuit
0
Controlling SMD-LEDs using a 74HC595 & NPN-transistor as switch