I'm stuck confirming that the current pulled in a circuit will be 15mA.

If I have hypothetical LEDs that pull 15mA each from 1.8V, and they are put in parallel (I know this is not a good idea, but just wondering what happened if is) with a 5V power input, the diagram should look something like this:

Now here's where my understanding ends: I know that voltage is equal for every parallel branch, 1.8V, but does the current ADD together and the total pulled current will be 60 mA because of the 4 branches?

I know I asked a lot of questions here and I apologize. Any help would be appreciated.

First, note that LEDs are current devices, not voltage. Their brightness is regulated by setting the current.

Second, LEDs have a fixed voltage drop, called the forward voltage, or Vf that stays more or less the same regardless of the current passing through the LED (it does increase slightly with current.)

Because LEDs are semiconductors (diodes), they will not pass significant current until the Vf voltage is met. Once it is met, the LED lights, and further voltage increases beyond Vf causes the LED current to rise rapidly. This non-linear behavior is the reason for the current limiting ('dropping' or 'load') resistor in most LED circuits.

The 1.8V Vf value you state is the low-end of typical for a red or yellow-green (although they are available.) More common for those colors is 2.1V

If you're assuming perfectly Vf-matched LEDs (a bad idea, by the way) with a stated Vf of 1.8V, you will have a corresponding IR drop across the resistor of:

Since we know this Vf stays more or less the same regardless of LED current (within a reasonable range), we calculate the resistor current as:

This current through the single resistor is the same as the total current for all the LEDs (Kirchhoff's Current Law). Therefore, each LED gets only 1/4 the current, or 3.75mA. Probably not what you intended.

If you want each LED to actually get 15mA, you can make one of the following changes:

Either way your total current will be 60mA. That's okay for an external FET, but it's really way too much for your Arduino GPIO.

A better solution, given your 5V supply and Vf of 1.8V, would be to wire two pairs of series-connected LEDs and use a dropping resistor for each series pair. Then your total current is only 30 mA (15mA each pair.) Your dropping resistors would be (5 - 1.8 - 1.8) / 15mA = 93 ohms. Not only does this reduce draw on the driver, but it's twice as efficient.

Even then, 30mA is still kind of a lot for a GPIO. Instead, I’d recommend using a low-side FET to drive the LEDs. Also consider choosing a high-efficiency LED type that gives adequate brightness at a reduced current. 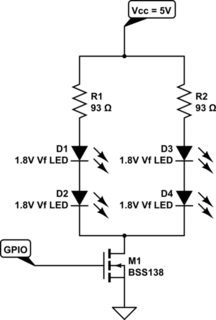 I think you should be looking at this Problem from another point of view. The Arduino is capable of supplying 40mA and you want your LEDs to be in parallel. This means you want each branch to draw 10mA. You should absolutely put a 500 Ohm resistor on each branch, a bit more to stay on the safe side.
Using a single 213 Ohm resistor will limit the circuit current to 23.5 mA and your LEDs won't be powered properly. To answer your question, the resistor doesn't use the current, it limits the maximum value of current flowing in the circuit and a voltage drops on it.

... but does the current ADD together and the total pulled current will be 60 mA because of the 4 branches?

That calculation is correct so you'll only get 6 mA per LED.

In your example you're using LEDs with a Vf of 1.8 V on a 5 V supply. That means you can series connect two of them and use your current more efficiently. Now you need only 2 x 15 mA = 30 mA.

Be careful with running close to max on the pin specifications and note that there will be a maximum current for the whole chip. Remember that all the current has to go through the tiny gold bonding wires on the V+ or GND pin of the chip.

The LEDs are in parallel so essentially independent each drawing the same current. They have a common connection to the resistor so see the same voltage. Assuming that the forward voltage drop of each LED is 1.8V you will need 15mA per LED totaling 60mA. Therefore the resistor will need to drop 3.2V at 60mA = 53 ohms (rather than 213 ohm in the diagram) and will dissipate 0.192W.

If you're driving this from an Arduino limited to 40mA you can up the resistor to 80 ohms. The LEDs will still likely work only not quite as bright. 15mA may well be the max current limit.

I'm stuck confirming that the current pulled in a circuit will be 15mA.

If I have hypothetical LEDs that pull 15mA each from 1.8V, and they are put in parallel (I know this is not a good idea, but just wondering what happened if is) with a 5V power input, the diagram should look something like this:

The way we express this is that the LEDs have a very low dynamic, or incremental, or differential, resistance.

If the LEDs are dropping roughly 1.8 V, then there will be about 3.2 V across the resistor.

This is the LED nominal forward voltage. This is not perfect for lighting them, this is approximately what you get when you pass a current through them.

No. The LEDs at exactly this voltage would draw anything from uA to 10s of mA. The LEDs at 15 mA will drop roughly 1.8 V, depending on temperature and the specific LED.

Now here's where my understanding ends: I know that voltage is equal for every parallel branch, 1.8V, but does the current ADD together and the total pulled current will be 60 mA because of the 4 branches?

If the LEDs somehow drew 15 mA each, then the four parallel LEDs would draw 60 mA.

You've used V = 5 V in the calculation. There's not 5 V across the resistor, only approximately 3.2 V due to the LED drop, which gives you roughly 15 mA through the resistor. This will then split into the four LEDs, giving about 4 mA each (giving the figure to the precision that a parallel connection of LEDs warrants).

The resistor doesn't 'use' current. You could regard it as 'using' the difference in voltage between the supply and the LEDs.

The reason we use a resistor here is to define an operating current for the LEDs. The resistor dominates the LED's very low incremental resistance with a real, high, resistance. That way, if the supply voltage varies, or the forward drop of the LEDs vary, the current will remain approximately the same.

I know I asked a lot of questions here and I apologize. Any help would be appreciated.

Here are some measurements I did of some diodes some long time ago. 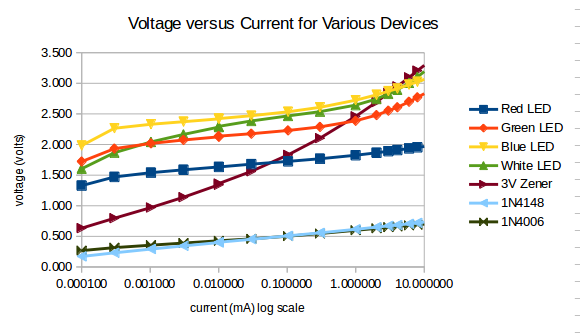 You'll see that for the red LED (blue trace, sorry!) the current varies from 1 mA to 10 mA, a 10:1 range, while the voltage stays at about 1.8 V. Even at 10 uA, 1000 times less, the voltage on the LED is still up at 1.6 V. That's why we say that LEDs have a 'constant voltage' while the current through them varies. It's not really constant, just much much more constant than would be the case if it was a resistor.

Reading the data behind those graphs, 998 uA gives 1.825 V, and 10.01 mA gives 1.968 V. That's a change in voltage of 143 mV for a decade change in current. You can see the log/lin graph is more or less straight over that range, so we can express this relationship reasonably as voltage = k.log(current_ratio).

Now unfortunately, the LED voltage/current curve is NOT reproducible, as it varies with temperature, and varies from LED to LED slightly. Let's say that one red LED has 20 mV lower forward voltage drop than another, and you connect them in parallel. Using the LEDs of the graph, one would then take 40% more current than the other. This is why we tend to use a separate resistor to each LED. We can use LEDs in series strings safely, as they are all forced to be at the same current.

In your particular case, you have the voltage headroom to run two parallel strings of two LEDs in series. You could run each string at 15 mA, for a total Arduino-friendly draw of 30 mA. See Transistor's answer for the resistor calculations.

Let's say that one LED increased its drop by the same 20 mV we considered above. The voltage on the resistor now drops from 1.20 V to 1.18 V, which reduces the total current down from 15 mA to 14.75 mA. That's approximately 'constant', not the wild 40% change that we had for the parallel LED case.

Not the answer you're looking for? Browse other questions tagged led resistors parallel series ohms-law or ask your own question.

10
Understanding why not to use a resistor for multiple LEDs