I am reading online about discrete audio amplifiers. I have learned about the input differential pair, the voltage amplifier stage, and now I'm learning about the output stage. I have learned that you want to bias the output to have about 25mV to 26mV drops across the emitter resistors as this will reduce distortion. But I have not found any information on how to bias the drivers and pre-drivers that come before the final output transistor pairs. I'm not refering to using Vbe multipliers, I'm asking how do we select the emitter resistor and current for the driver and pre-driver transistors? I was thinking that maybe the quiescent current through the driver should be the max current of the output divided by the beta of the output transistor but I can't find info on this. Maybe I'm looking in the wrong places or doing the wrong search keywords. I have attached an image I found online as refenrence where you can see the resistors in question. In this case they are 62 ohms for the driver pair and 300 ohms for the pre-driver. Any info would be helpful thank you. 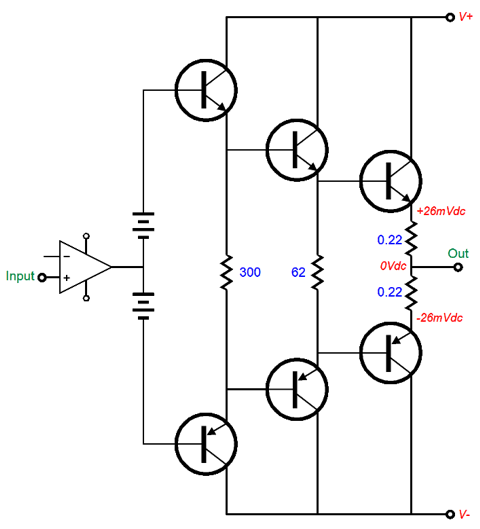 Then a proper design formula can be created.

But for copying existing designs, 0.1 Ohm on each emitter or was,it 0.05 Ohm in Crown DC300’s were used with many parallel BJT’s for final stage then , my guess 50x this for each previous stage.

p.s. by matching parts, you can reduce the mismatch compensation emitter resistors. But that requires quality control binning tests to be done properly.

For example ! I have thousands of LED diodes matched for Rs (or Vf @ __ A or mA) within x or xx mV in big lots so no series R was used sharing 16 power LEDs 16P4S with no series R , no current hogging and no thermal runaway, it all on the same MCPCB heat sink (essential) but for 5mm parts, none required, but you cannot buy those, but I did, because I ordered bulk and got them on same wafer, pretested, binned and documented by supplier. ( and if anyone is interested in 250pc bags 5mm LEDs ~16 cd @ 20 mA, I have box full surplus) 10k or more?

Not the answer you're looking for? Browse other questions tagged emitter-follower class-ab or ask your own question.