What do these components of an AB amplifier do?

I'm trying to learn about class AB amplifiers by reverse-engineering a few I see here on SE. I borrowed this schematic from this question as a starting place.

Ignoring the fact that the circuit lacks emitter degeneration at the output -- which I understand to be a critical flaw -- a few other parts still puzzle me.

All the components in the original were not labelled so I redrew it. 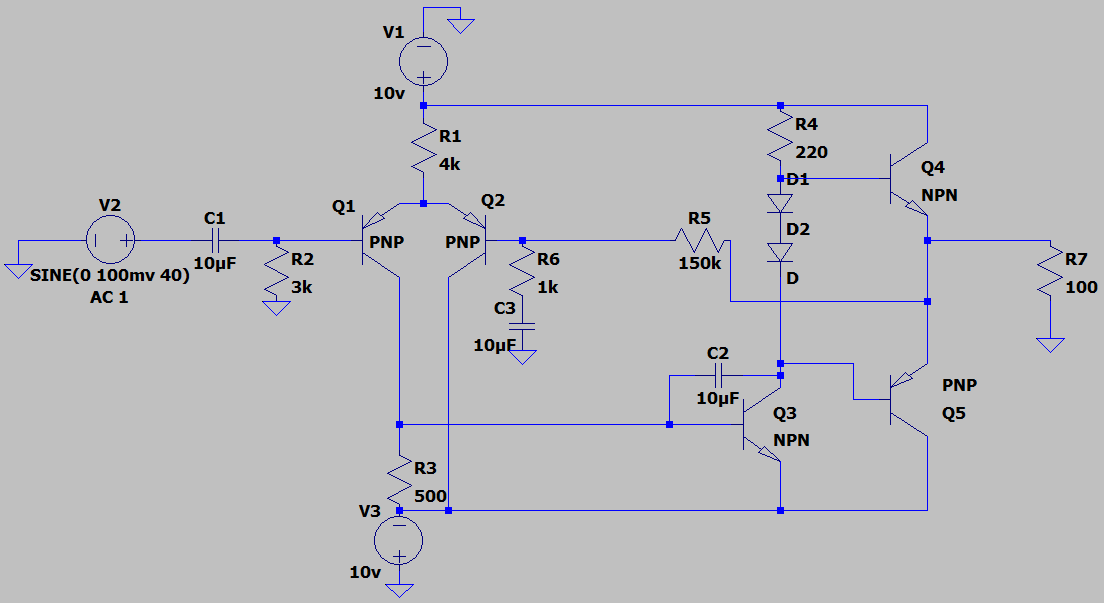 I'm pretty sure I get the basic idea that the input is fed through a differential amplifier Q1 and Q2. The output stage is a class AB with two diodes preventing crossover distortion. Some feedback is pulled from the AB back to the differential to help fight distortion, I imagine.

Here's what I'm stuck on:

What is the purpose of R2? I know that C1 couples the input but what does this resistor to ground accomplish?

Likewise, what do R6 and C3 do? It seems to be part of the feedback circuit.

Is Q3 working as a constant current source? What does C2 do to help?

This is a simplified Class-AB push-pull amplifier circuit.

What is the purpose of R2.

R2 is there to bias Q1. Without it, the Q1's base will not see GND and thus cannot get into DC operating point. Also R3 brings a low-cut in conjunction with C1.

Likewise, what does R6 and C3 do? It seems to be part of the feedback circuit?

Yes. The feedback network consists of R5, R6 and C3. At DC C3 is open-circuit. So R6's effect gets cancelled out. This makes the output to be fed directly to the inverting input (Q2's base) at DC, which means that the gain at DC is unity.

At AC, C3 brings a low-cut in conjunction with R3. The cut-off frequency is \$\mathrm{1/(2\pi R6\ C3)=1.5Hz}\$ with a slope of 3dB/decade. Actually we can assume that C3 is a short-circuit along the full audio spectrum, because it's high enough and it does not impact any single point inside the audio spectrum. So at AC, the output is fed to the inverting input with a division ratio of R6/(R5+R6), which means that the voltage gain at AC is (1+R5/R6) - just like in an opamp non-inv amplifier.

Is Q3 working as a constant current source?

What does C2 do to help?

It's called Miller Capacitance. Its main purpose is to ensure stability. Think of it as a capacitor across the B-E of Q3 but with a capacitance of \$\mathrm{C2m=C2 × h_{FE-Q3}}\$ (Miller Effect). This C2m brings a high cut. But C2 is way too high in the circuit shown, so probably it'll chop off all the usable band. Normally a few tens to a few hundreds of pF is enough in practice.

Looking ahead, the circuit as drawn

The quiescent current thru the diodes, and the 220 ohm resistor, must be 10volts/220 or about 45 milliAmps. At this high current, we don't know how linearly that NPN will perform. The Rin will be very low ( << 100 ohms), thus the 500 ohms on its base will NOT be setting the gain of the diffpair.

Summary: consider replacing the 220 ohm pullup to +10 volts with a current source.

R2 provides a path to ground for the base current of Q1. I'd suggest a rather higher value in fact. Ideally R2 =~ R5 to avoid DC offsets at the output from bias currents.

R6 and C3 set the AC and DC gain in combination with R5.

At audio frequencies consider the impedance of C3 to be near zero. The amplifier gain is therefore (standard non-inverting configuration) 1+(R5/R6) = 1+(150k/1k) = 151. Rather on the high side for typical practical purposes actually. For DC, C3 is open. Q2 'sees' the output via R5. 100% feedback gives a gain of 1 for this non-inverting circuit.

Q3 is simply the second voltage gain stage. As it's loaded with a resistor R4, rather than a current source, which is more typical, it's not going to operate at constant current.

C2 would typically be there to provide 'dominant pole compensation' to ensure stability at HF. It's normally tens or hundreds of pF. Where did you get 10uF ?

D1 and D2 don't actually 'prevent distortion' directly. They bias the output stage into conduction, so that distortion is much lower than without.

A decent real world amplifier would of course be a little different. R1 would become a current source and R4 would either become a constant current load or an active load formed by circuitry using the signal from the other leg of the differential pair.

Not the answer you're looking for? Browse other questions tagged amplifier diff-amp class-ab or ask your own question.

0
What causes these different behaviors in my amplifier?
0
Distortion Elimination with Differential Transistor Pair
1
What are these inputs for this audio power amplifier?
4
What step have I missed designing this differential amplifier?
0
Class AB Amplifier - Q point
1
How do analyze input impedance of Class AB amplifier biased with resistors?
1
Differential pair biasing by current sources