Why does this DC motor controller use relays and also MOSFETs?

I've a motor control board here for controlling the motors that move a caravan. The board wasn't working properly so I thought I'd take a look at it. I'm definitely a newbie when it comes to electronics, but I'm not bad at understanding the electrical aspect of simple circuits..

I traced out the relay connections as that seemed most logically how the motors would be controlled. The circuit looks like this, and the relays all function as I'd expect - a main power feed is switched on/off by two relays and from there feeds to a bank of 4 relays that are all off, and energise alternately depending on whether the relevant motor is to go forward or backward. The red boxes denote relays- i've left the coil rendition and the coil connections out because it's not needed for my question: 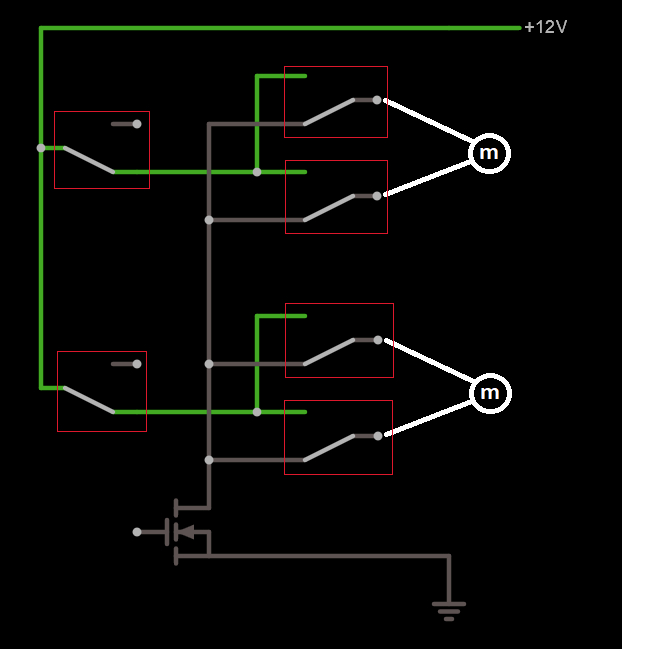 Chiefly I'm curious why the ground/negative is supplied through (board can take six but only features four in parallel, only one shown in diagram) IRF3205 MOSFETs? Why does there need to be anything that switches the negative?

3 of the MOSFETs seemed dead - the D-S was OL regardless of whether the G had been prodded with the multimeter probe to activate it, and the 4th had some odd non-OL readings whether activated or not. I found a lower power MOSFET in a PC power supply and soldered it in as a tester, and the board neems to work sensibly now (on the bench) so I've ordered some replacements for the IRF3205s but I was puzzled as to why they were necessary

Pictures of the board in case they help: 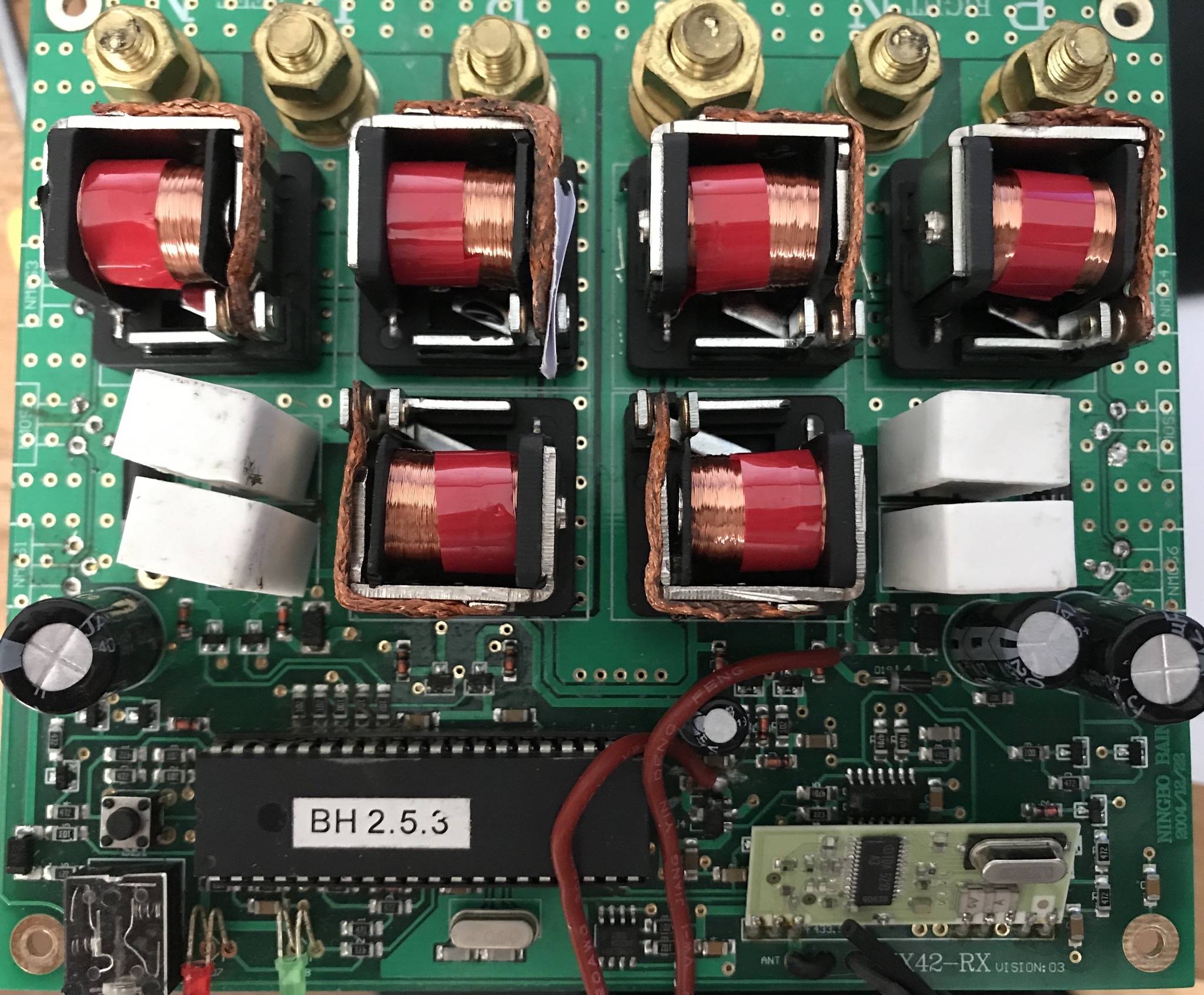 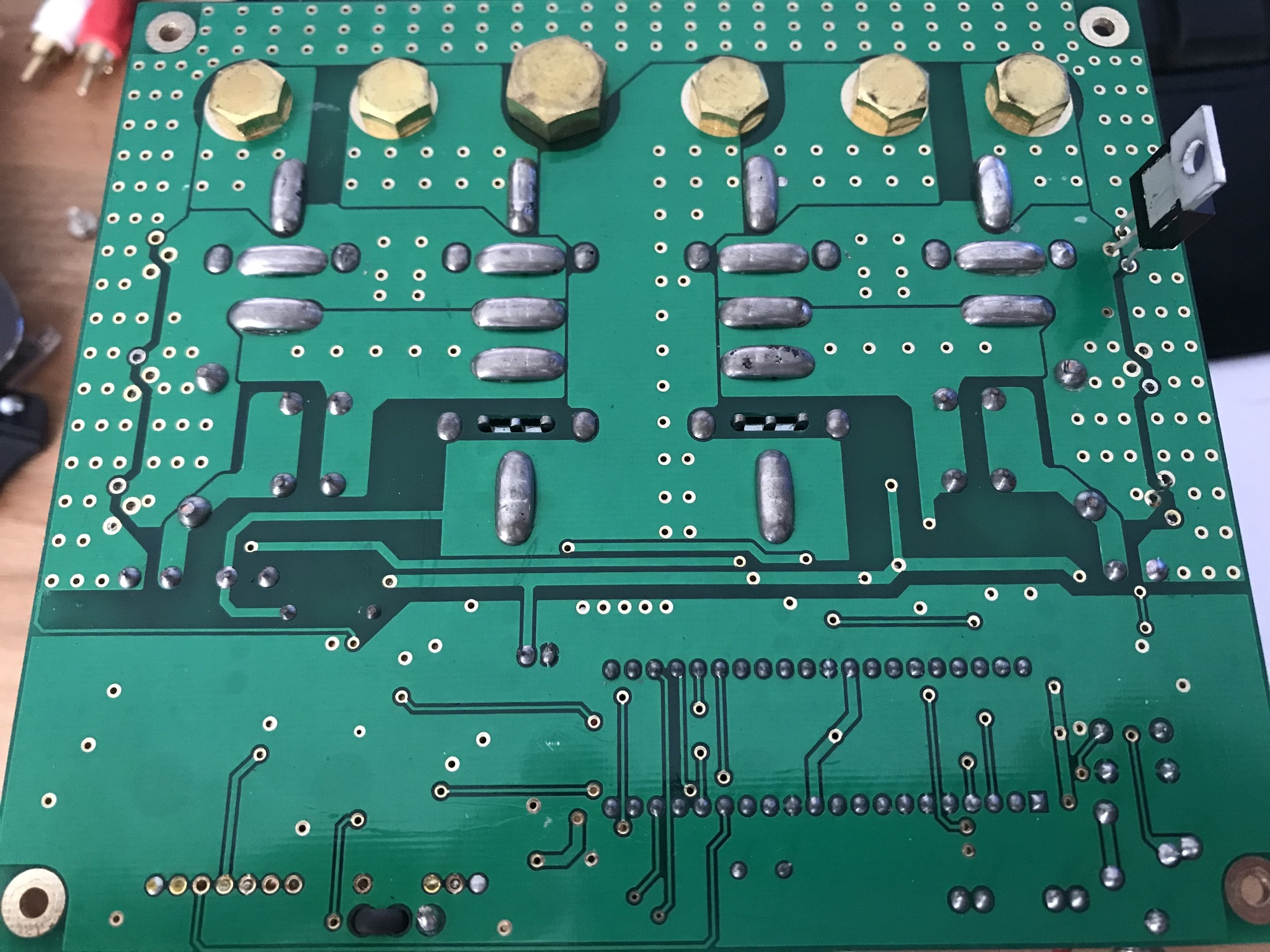 Also, bonus question. When the controller is used, the sequence of events is:

What was the purpose of this brief "connect both motor terminals to positive" ?

Briefly connecting both motors to the same terminal (either works, yours chose positive) shorts out the motor. This brakes it, which reduces current surges while reversing.

What the MOSFET is for is anybody's guess, unless you know what is driving the gate. It could provide soft starting, or an electronic disconnect in the event of overload, overheating, etc.

Not the answer you're looking for? Browse other questions tagged mosfet motor-controller or ask your own question.

0
How do I control a small dc motor with a mosfet?
3
Relay output from MCU with enhanced safety level
0
N-mosfet low-side switch being turned on with no direct gate drive signal
0
High-Power Switching using MOSFETs
0
2-way DC motor control for greenhouse IoT application
0
Again about four-terminal MOSFETs and relays
0
Create an H bridge with MOSFET instead of relays
0
Power supply to an A4988 driver