I am trying to find the transfer function H(s)= Vo(s)/R2(s) but i am struggling to get it. I am assuming an ideal op-amp. V+=V- and that no current flows through the pins op the op.amp. 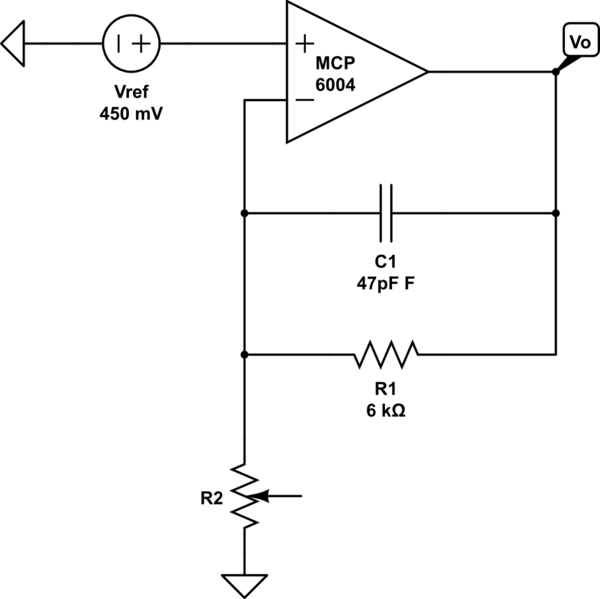 Since the resistor R2 is a piezoresistive sensor, i am modelling it as a linear pot (considering it the input of the system).

Can somebody help me getting the Transfer function? thanks in advance!

So, varying R2 is the input and you want the transfer function between that input and the output voltage. There's something like the Laplace transform s in your transfer function. I guess you really expect something which takes into the account time and the slowness of the parts, for ex. the capacitor and maybe also the non-ideality of the opamp. The idea is rational although resistance as input is not as common as a voltage input.

Unfortunately R2 affects Vo non-linearly, so you must linearize its effect at some operating point. You must know the idle value of R2 and assume R2 swings only a little around the idle value, for ex 10% or less. How large swinging amplitude can be used without substantial error depends on the nature of the non-linearity. Deeper analysis of it needs advanced math. The same kind of math is needed in control system engineering.

The linearization with differential calculus is tricky. I have to skip it. But a circuit analysis program does it numerically. It calculates the small signal frequency response. You must be able to use R2 or actually its variation around the idle value as your input signal and do the AC analysis having Vo as the output.

I cannot force in freeware Micro-CAP a resistor value work as input signal but I can build a circuit which behaves like a voltage controlled resistor. The control voltage is my input signal: 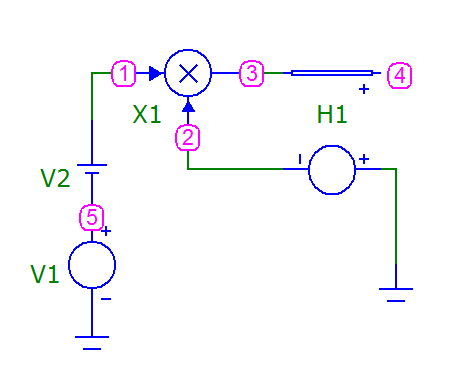 Node 4 is now unconnected. I can connect to it a circuit which needs a resistor against the GND. Voltage source V1 presents my resistance variations and V2 is the idle value. The scaling factor of the voltages is 1 volt/ohm. If I need idle resistance 9 Ohm and the wanted resistance variation is sinusoidal 1 Ohm peak I set V2=9V and V1=sinusoidal 1V peak (or 2Vpp). We try it soon.

X1 is ideal voltage multiplier and H1 is ideal current controlled voltage source. Its transconductance is -1 amps/volt (that's -1 mhO). It's minus only to avoid messy looking wire crossings in the image.

The circuit which is connected to node 4 must have some passive parts other than only an ideal voltage source or an ideal inductor. Otherwise the analysis halts and message "Found a DC voltage loop" is given.

The next image shows it works. This is transient analysis. The shown curve is the current of the 1 Ohm resistor R1. The voltage controlled resistor swings 8...10 Ohm. The total load of V3 swings 9...11 Ohm, so the current swings 0,91...1,1 amps. 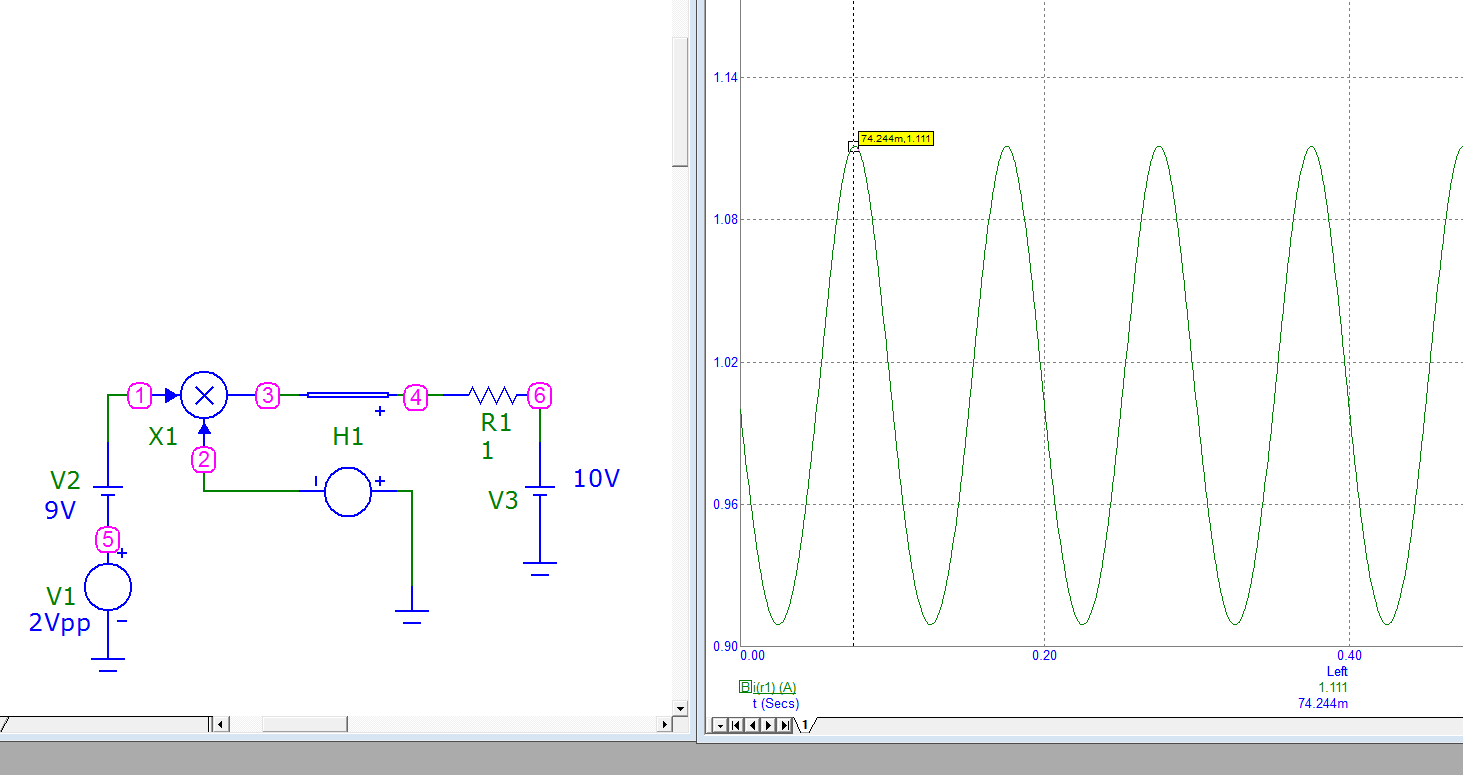 The controlled resistor fulfills equation U=I*R. It sets it own output voltage to its input current (from node 4) multiplied by the wanted resistance.

We can simulate an opamp circuit. It's like yours but component values are changed to get easily verifiable mumerical results. At first transient analysis at 1Hz so that the capacitor nor the slowness of the opamp do not affect:

The AC analysis from 10Hz to 1MHz qualitatively is like expected. The big feedback capacitor pulls the gain visibly downwards and cause visible phase lag at frequencies as low as a few kHz:

At low frequencies the phase shift is 180 degrees. But this was non-inverting amp? No problem. The input is the resistance control voltage. Increasing it lowers the gain for the DC voltage V5, so phase inversion is as it should be. 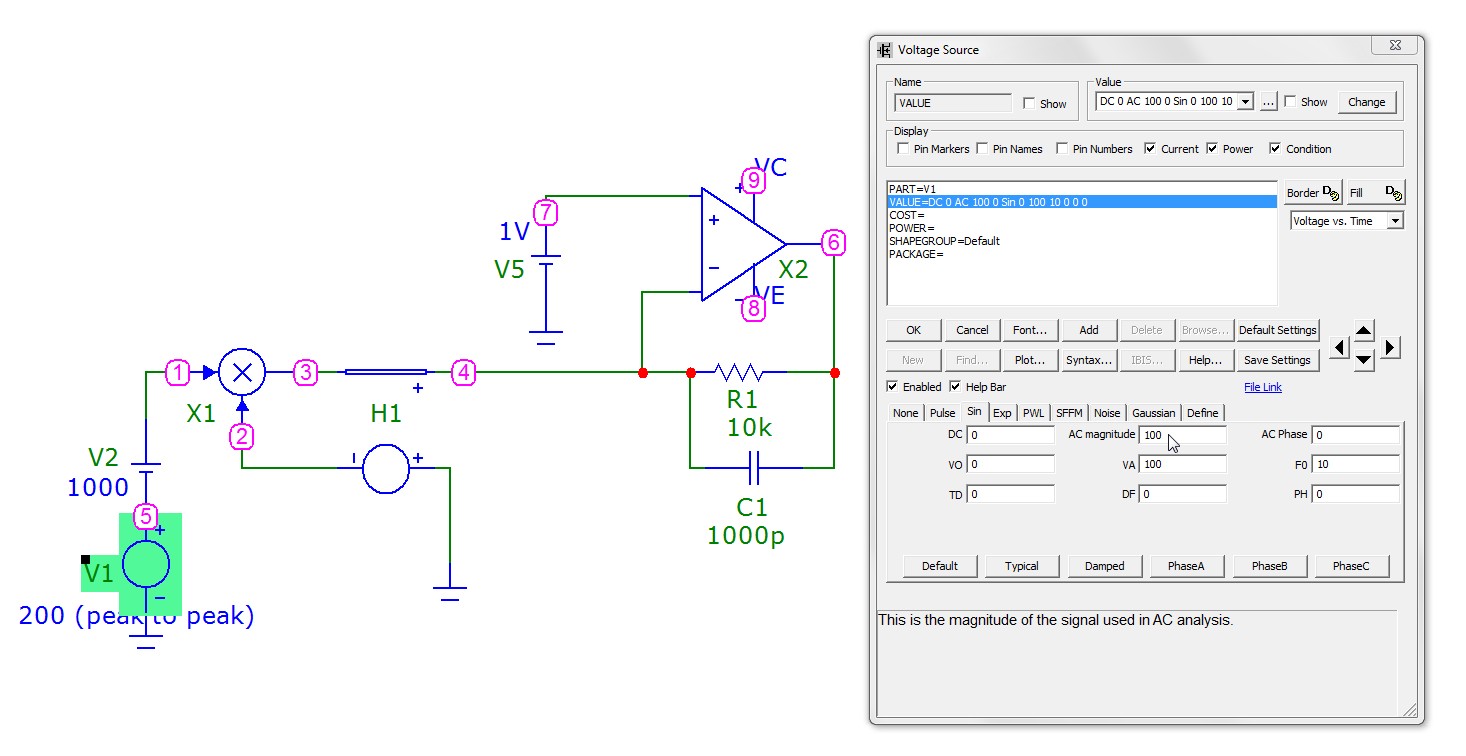 Gain in decibels when the input is ohms (or actually how much the resistance varies) is problematic. It generates easily numbers which look tens of decibels attenuation. I lifted the AC analysis magnitude of the input V1 to 100 volts. That means +40dB lift to the gain when compared to AC magnitude =1V. The 100V (=plusminus 100 Ohm resistance swing) was selected because it causes plusminus 1V swing to the output voltage. It's easy to find the frequency where plusminus 100 Ohm resistance swing causes say plusminus 0,1V output swing, Thats's the frequency where the gain = -20dB. It's about 140kHz.

But what's the benefit of this hassle? As said the varying resistor is some kind of sensor. The frequency response makes possible to see how the circuit can cope with variations at different frequencies. It's needed for predicting how well a control system will work.

The sensor itself often has some slowness. It can be modeled as a filter in front of the system and taken into the account when the whole frequency response is needed. Finally Transient Analysis makes possible to find responses to arbitary inputs and it's possible to use the same circuit.

Not the answer you're looking for? Browse other questions tagged operational-amplifier transfer-function non-inverting or ask your own question.