I believe that I am fundamentally missing something when looking at schematics. The image below which was used to teach me voltage dividers illustrates my area of confusion. 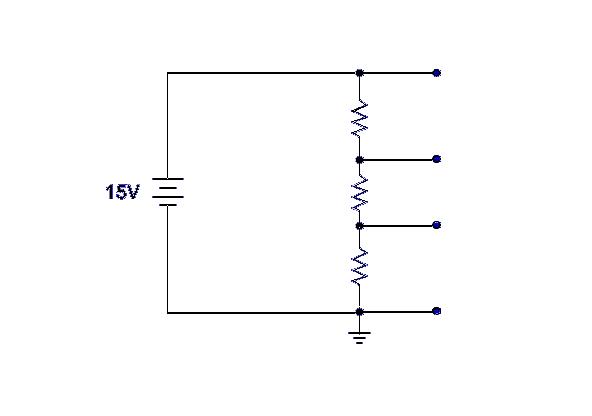 I understand that ground is used as a reference for the voltage divider, and that each successive point above ground is how much voltage is dropped across the circuit. (So with a 15 volt input, and 5K ohm for each resistor the taps would be 5, 10, and 15 volts respectively.) What I do not understand is by placing ground at that location, wouldn't you immediately sink all the current to ground and have nothing moving through the voltage divider? As I understand it, current will move to either ground or a more positively charged location (such as the positive side of a battery in this case), but with ground located where it is I do not understand why all current would not immediately sink to ground vice the voltage divider. Please let me know if this is just a poorly developed example or where my misunderstanding is.

There is no "low resistance path from the battery directly to ground" in your circuit.

Current is always "looking to go to ground", but it cannot get there through the inside of the battery. Battery construction techniques are widely varied, but they all consist of some form of internal barrier that prevents the internal mobile charges of one polarity from being able to reach the internal net charges of the opposite polarity. If that were possible, the battery would not contain any potential energy (the ability to do useful work).

Because the positive and negative charges in the battery can't recombine internally, the only way they can get to each other is to travel through the external circuit (path) you provide. Thus the charges are "forced" to do useful work in your external pathway because they are "looking to go to ground".

Current (in EE convention) will flow from the positive terminal. So the only way down is through your resistor chain. Interestingly enough, a circuit attached to "ground" (Earth or otherwise) will not necessarily see no lower voltages.

Current does not "stop" at ground. This is Kirchhoff's Voltage Law. In your schematic it would make no difference if you turned your battery upside down. The voltages (relative to "ground") would just now be negative.

Ok, so lets say we flip the battery...

It might be interesting (if not amusing) to think of the electrons as little people. Each person is motivated by two things:

That process is why currents circulate -- (must!) flow in loops. Forget "ground" for a minute. I think the circuit and concepts make sense to you.

You're getting stuck on the concept of ground. The reason is that electrons and "ground" are unintuitive because it's a mixed metaphor. "ground" is supposed to represent the "lowest potential" in the system. It doesn't always. Nothing in physics demands that -- it's just terminology.

What it really represents in practice in a simple circuit like this one (and why we teach the concept of "ground" or better "reference") is that it represents the place the mobile charges would most like to be. In this case it's the negative terminal of your battery.

In electrical engineering, we are stuck with the convention that current is defined in terms of the flow of positive charges. Therefore, the positive charges would most like to be at "ground" (the most negative -- lowest -- point in the system). Actual electron flows are reversed from this convention, which is, I suspect, the source of your confusion.

But even that isn't the whole story since "ground" is just a reference potential and nothing forces it to be the absolute lowest potential in the circuit. Really it is just an arbitrary point where we say the potential is 0 Volts. Voltage is a differential measurement and cannot be defined without a point of comparison.

For the sake of this circuit, the ground symbol is not strictly necessary for understanding the voltage divider. It simply alludes to the fact that this is the point where the (-) node on the battery would be attached to an earth ground of some type when actually put in an enclosure.

This takes a minute to understand for the first time.

When you have any voltage, you are really talking about the difference in voltage between two nodes. If no second node is specified, you are supposed to imply by convention that they are referencing from ground (often referred to as common in DC circuits).

So what a battery actually does is it creates a voltage difference between the negative terminal and the positive terminal of the battery.

So then, what is the point of having an actual ground symbol tied to the (-) terminal of the battery? There are a few reasons. First, every time moving current is present, there will be a magnetic field induced that curls counter-clockwise around the core of the wire (right hand rule). Furthermore, in any environment there could be random magnetic fields coming from the lights, from radio waves, from the sun, and so on. You could also gain static electricity which is influenced by the humidity, the materials of the environment, etc. Because all this stray magnetic radiation could be present near your circuit, and any pieces of metal can act like an antenna which transform magnetic field into electrical current, your circuit could get unwanted and unplanned electrical current, which could interfere with what the circuit is designed to accomplish and in some cases it can be unsafe.

So the solution is to designate a terminal to be ground and then connect the (-) terminal of your voltage supply to it, along with the chassis of your enclosure, or if you a connecting to a building's electrical outlet, a connection to the earth ground, which is actually a physical pole buried literally in the ground, as in the dirt.

So essentially, if you left the ground symbol off of your voltage divider circuit, you could analyze it exactly the same way, and you wouldn't have any problems until you actually built the device and you might have noise.

Hopefully this explains the ground. Now to actually analyze the circuit.

You have four terminals shown, so you can get voltages (referenced to ground) on all four. Let's number these 1-4 from top to bottom.

1 should be straight-forward. It's 15V: it's connected directly to the (+) terminal of the battery.

4 should be straight-forward as well for the same reason. It's 0V. What's the difference between ground and ground? Zero.

Now the key for understanding 2 and 3 is that you assume that current cannot actually flow out of the terminals. For one, it's not hooked up to anything. For two, generally in circuits that deal with output voltages from one device they are going to be hooked up to devices with inputs that have "infinite" impedance (i.e. resistance in this context). I put infinite in quotes because it's technically not infinite, but for all intents and purposes you can assume that the resistance is so large that the amount of current that can actually escape might as well be considered zero.

Now you know voltages of all nodes.

Assuming nothing connected to each of the points in the circuit (i.e. no load conditions), each node will have a certain voltage with respect to ground that depends on the values of the resistors. Once you add a load (resistor for example) between any of the points and ground, or any of the points themselves, the resistance changes and the voltage at each node changes.

If you disconnect the resistors from the circuit, current cannot flow anywhere because air is a poor conductor for very low voltage. As soon as there is some path, current will take it. There is no alternative path for the current than to go through all resistors. Current is "lazy" and it will take the "easiest path". The path of the resistors is a lower resistance than the infinite resistance of open circuit.

By the way, the best understanding of these concepts is usually by some practice solving resistive networks. One I would recommend is Electric Circuits by Nilsson and Riedel. It covers everything from the ground up and has many many exercises. You can also find solutions manual to check yourself

The ground mark you see at the bottom, is the same ground point as the negative terminal of the battery. It is there as for notation in your schematic, it is not a separate connection.

In this battery based schematic, the current must flow through the resistors. If you had a wire from the positive side to the negative side, without resistors, then the voltage divider would not get any current, because you are creating a short circuit.

2
Voltage Divider
1
Precision voltage divider
0
Loaded Voltage Divider
1
voltage divider confusion
0
Trouble understanding thevenin's model from AoE Lab
0
Voltage divider with MOSFETS
2
How to solve a LED-resistor parallel with a resistor?
0
Does connecting neutral to chassis (bootleg ground) rise chassis potential to main's voltage with respect to ground?
0
Confusion about relationship between energy per coulomb, and the amount of coulombs in current