How to eliminate the forbidden state in an SR latch?

I'd like a latch where the output only changes when both inputs have changed. If only one input has changed, the latch output should stay constant.

Here's the state table I want:

The above looks just like a standard SR latch, except that the (1, 1) forbidden state is replaced with a hold state.

If my assumption had been correct, then the main challenge would have been the fact that the two poles are racy: pole #1 might change before or after pole #2 changes. This would mean that during a transition the poles could be in any state: (0,0), (0,1), (1,0), or (1,1). But, there would be a property I could rely on: Once the switch went from (0,1) to (1,0) (or vice-versa), it wouldn't bounce back. This property would have allowed the above latch to debounce the switch.

First of all, your assumption that mechanical switches open cleanly is false. They bounce on both make and break.

However, to address the specific question of the latch, it's simply a matter of creating an S-R latch that only switches on the "final" states (0,1) and (1,0). The latch will change state the first time the new final state is reached. If the make occurs first then the bouncing between the initial state and (1,1) will cause no change to the latch. Once the other contact breaks then the latch will switch, and any bouncing back to (0,0) will be ignored. If the break occurs first, then the latch will switch on the first make of the other contact, and again, any bouncing back to (0,0) will be ignored. 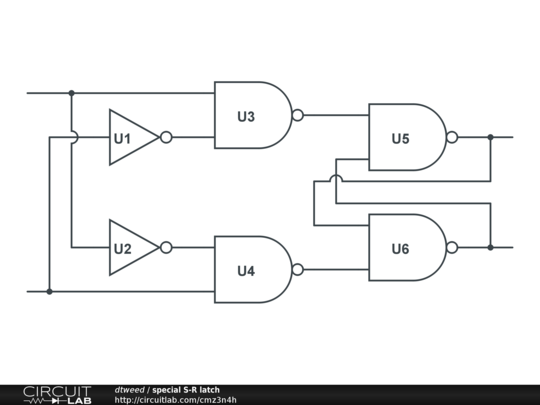 There are, however, a couple of points you may consider: (1) there are a number of ways you can design the switch circuit so that the switch will draw zero power in a steady-state condition. For example, instead of using NAND or NOR gates, use inverters with resistors in the feedback path, and use the switch to ground one or other inverter's input; (2) even with a two-state switch, absolutely perfect debouncing is impossible, because the contact which is closing might conduct for an extremely brief moment and then re-open for awhile before it closes for good. If the initial brief closure is just the right length, it may disturb the latch enough to stop it from holding a clean latched "zero", but not enough for it to latch a clean "1". This could cause a condition called "metastability"; there are ways by which one may make metastability extremely improbable (e.g. to somewhere around probability of one's apparatus being destroyed by a random meteorite) but it's hard to eliminate it as a possibility.

Not the answer you're looking for? Browse other questions tagged switches debounce latch or ask your own question.