As a small buzzer to output simple audio, I am considering the Jiangsu Huaneng Elec MLT-5020. Other buzzers of that size are also an option, as long as their footprint isn’t much bigger than 5×5 mm.

I want to connect the buzzer to an Arduino (ATmega 328p) circuit with 5 V. I don’t have a 3.6 V power source in that circuit, although I could add one, for example with an LDO.

Some questions that come to mind:

I know the sound quality of these buzzers is awful, but I don’t want to degrade it further by bad wiring.

I tested the circuit with various resistors in series. Applying a constant high signal, I measured the current. (Interestingly the current fluctuated by a few mA, despite a constant voltage.) 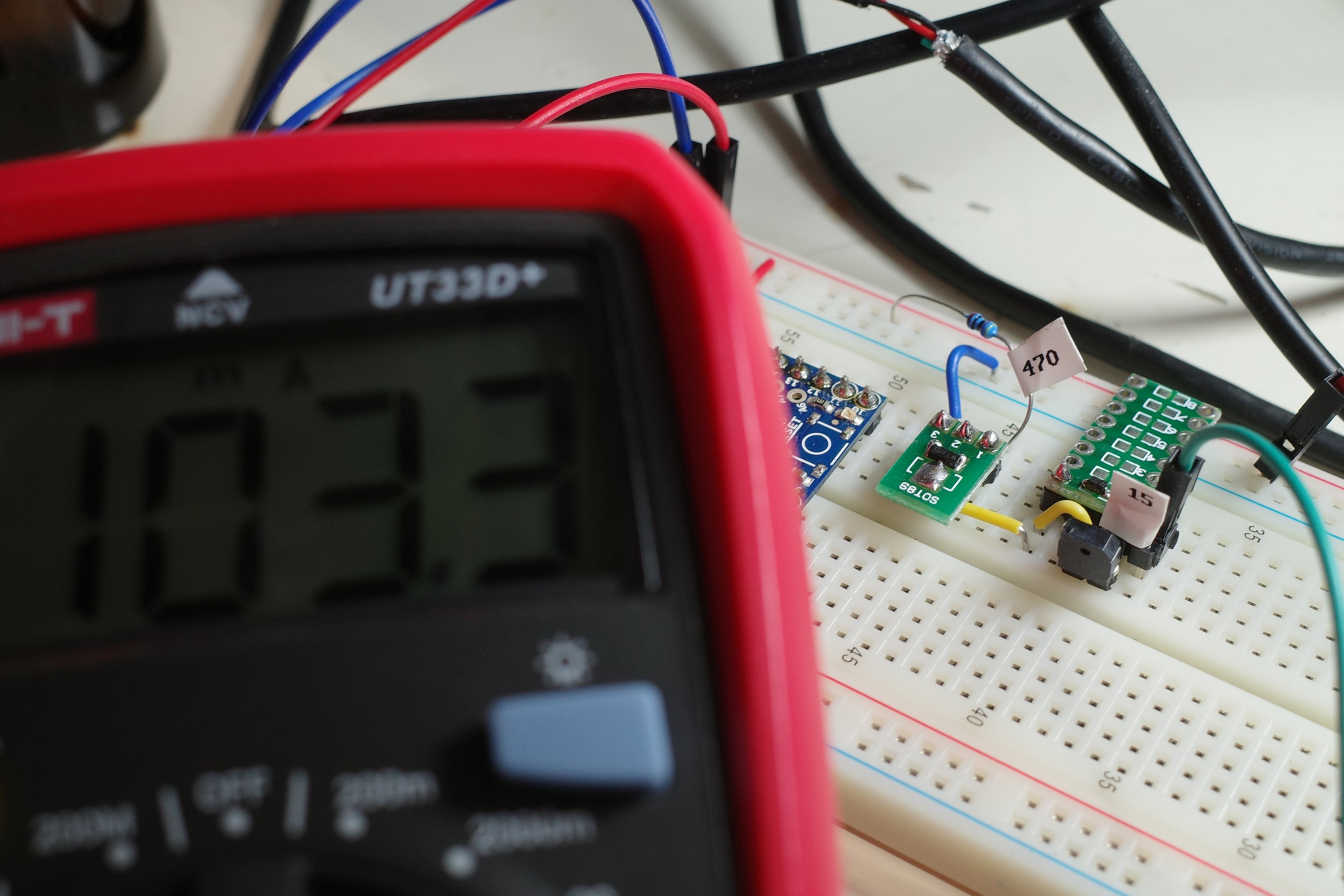 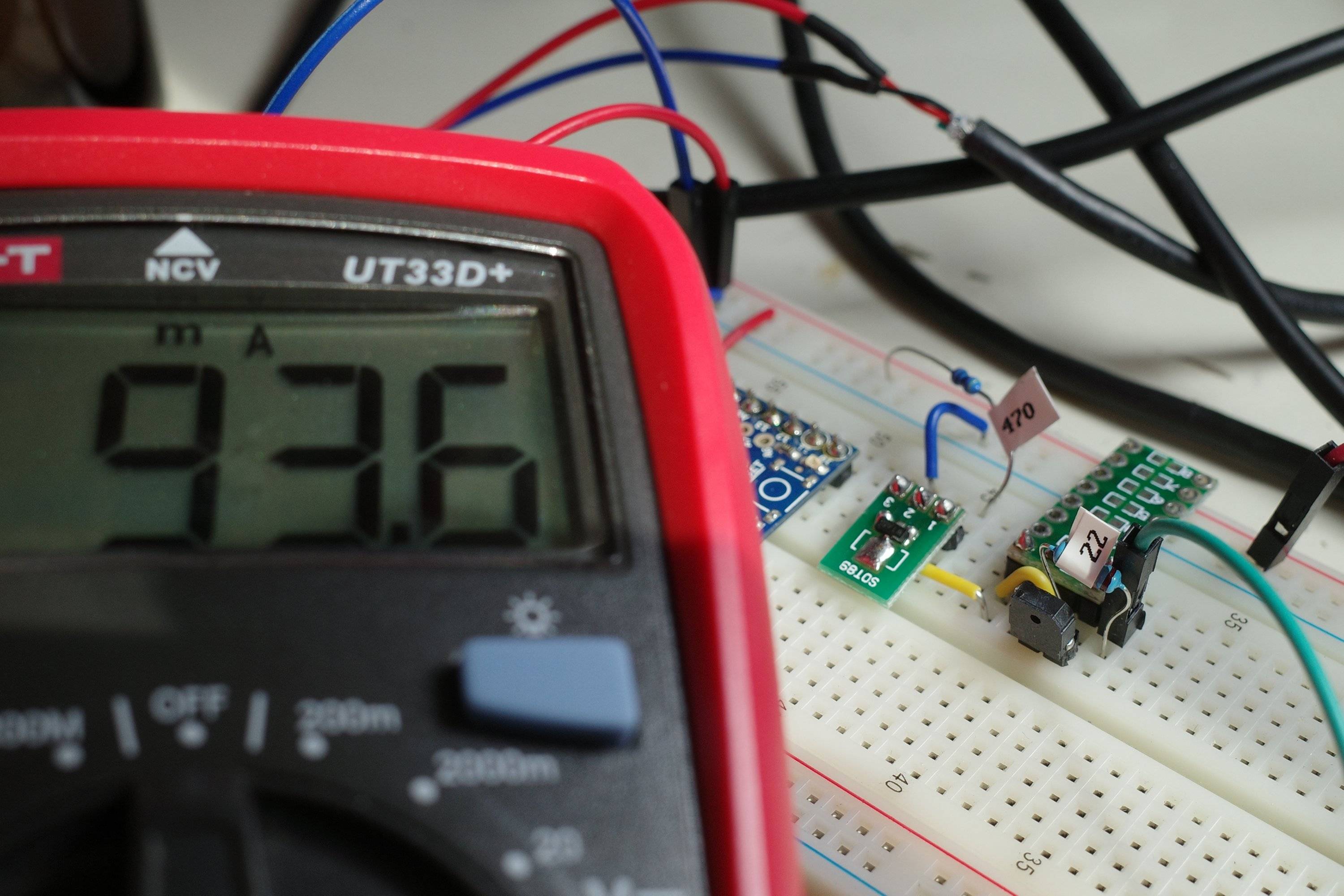 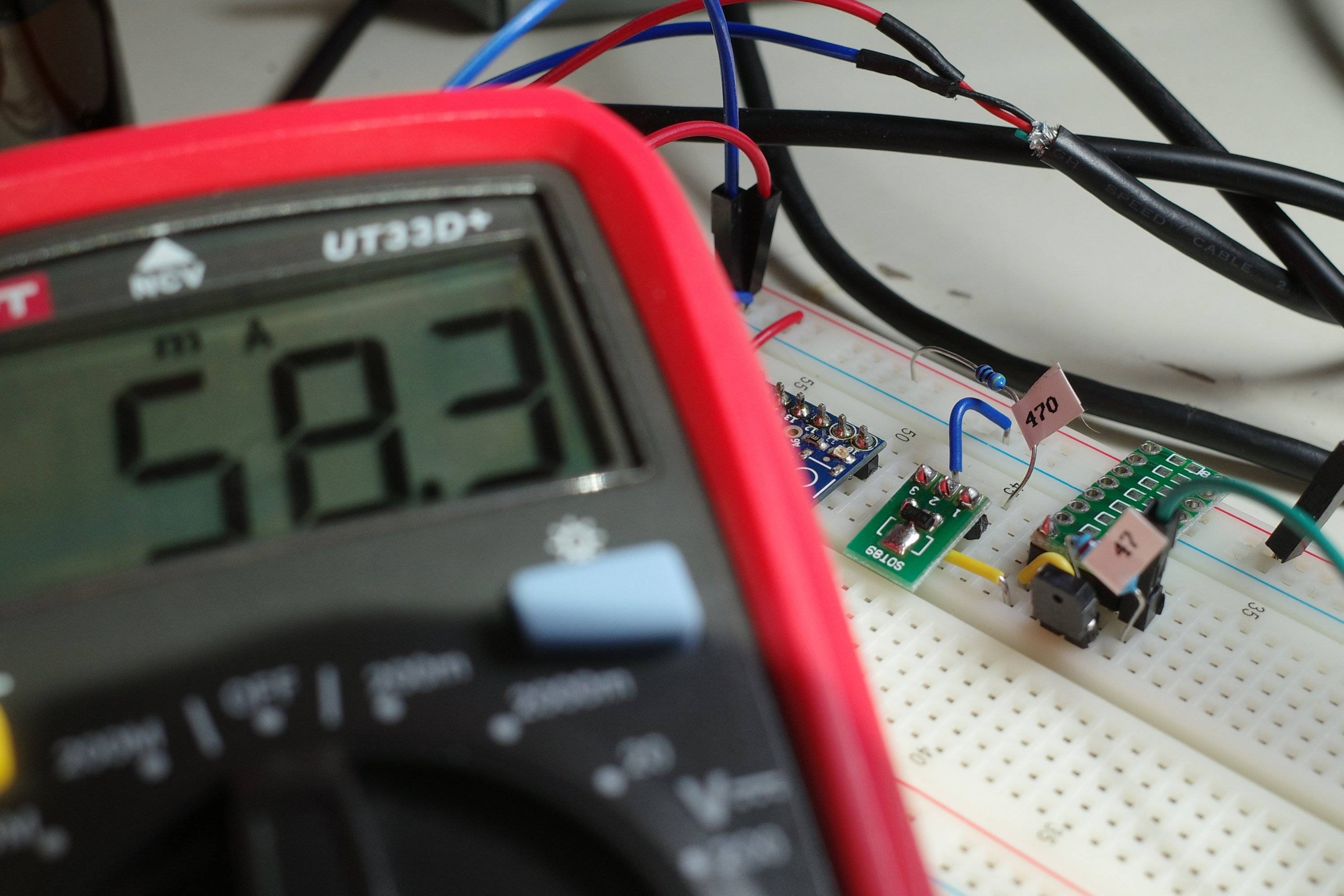 Above 100 mA, the audio starts to clip. I compared various resistances to the 47 Ω proposed in Chris Stratton’s answer. See my video MLT-5020 Tests.

I also tried connecting the MLT-5020 directly to Arduino pins 9 and 10 and driving it in push-pull mode via the ToneAC library: It was less loud than with the transistor ciruit. Apparently the Arduino cannot provide enough power on these pins, and obviously that's exceeding its maximum current ratings anyhow.

This is a magnetic buzzer, so the real concern is current, not voltage (you're nowhere near insulation breakdown).

Applying ohms law, you can calculate that 5 volts divided by 100 mA gives a minimum resistance of 50 ohms.

At minimum coil resistance, you'd need 50-9 = 41 ohms of series resistance to not violate specifications if the buzzer were permanently driven with 5 volts DC.

In practical terms, if you build the depicted transistor circuit but add say a 47 ohm series resistor between the buzzer/diode and the supply, things should be fine - even if you have a bug in your program which leaves the transistor base permanently driven.

In practice, you can probably use a smaller resistor, on the other hand you may find it's already loud enough (at least if you drive at the resonant frequency) and use a larger one. Do note that if left with 5 volts applied (which you'd want to avoid, though again it could happen as a bug) this would need to be a half watt resistor. Make sure when you stop buzzing you leave the base low!

There are more optimal ways to drive this, eg incorporating a capacitor, push/pull drivers, etc but you are probably looking for simplicity.

Not the answer you're looking for? Browse other questions tagged arduino audio schematics buzzer or ask your own question.

9
CD-ROMs open/close in response to sensors
18
Using a microphone with an Arduino
1
Circuit to switch about 5W of 12V using CMOS logic inputs using N-channel MOSFET?
1
Handling audio signals on a 5v ADC
3
12V sound transducer not loud enough
0
Why is voltage level affected by low temperature?
1
Problem connecting to Arduino with USB and audio
3
Driving a tiny speaker via pwm, amplified with a BJT - in reverse?
0
What makes an active buzzer oscillate?