I am building a motor with permanent magnets in the rotor, and I need to pulse the stator coils at the right time, and need to be able to adjust the duty cycle.

My plan was to use not 1 but 2 Hall effect switches (A3144) in an AND gate setup, where the current would only flow when BOTH sensors were ON.

This way, the further I place the sensors apart, the lower the duty cycle becomes, since the moment at which both sensors are ON becomes shorter.

However, I've only been able to create an OR gate setup like this: 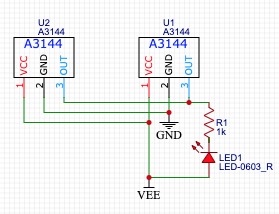 Any idea if and how I can create an AND gate using two Hall sensors?

Your Hall sensors appear to be of the usual output-low-when active and hopefully open-collector/open-drain configuration. Thus in your shown circuit, the LED will light when either activates and sinks current.

So a literal answer to your question would be to buy an OR gate such as a 74AHC1G32. Or if you'll take four of them to get a breadboadable 14-pin DIP package, an 74AHC32. The "AHC" letters represent one logic family with a wide supply range; depending on your actual needs many others will suit.

However, given that you seem to be trying to ultimately do motor control, in the end you'll probably have an MCU in the system.

And at that point, it makes far more sense to run the two sensors into distinct MCU pins, and implement the required logic function in software.

Please do not show a positive voltage supply as Vee, and show it at the top of the schematic. Both of those actions suggest it is a negative voltage wrt ground.

The output of the 3144 is an open-collector NPN transistor, so you have built a wired-OR gate (inverted output).

If you want an AND gate, you can add pullup resistors to each output (eg. 10K to Vcc) and use a NOR gate with the LED + resistor from the gate output to ground (active high).

The logic family (if any) that will work depends on the Vcc voltage. At ~5V you could use a 74HC02.

Alternatively, and for voltages up to 15V or more, you could use a discrete circuit such as:

Both inputs have to be low for the output to be low (opposite of the above) and thus for the LED to illuminate (since it is connected between output and Vdd).

Not the answer you're looking for? Browse other questions tagged sensor brushless-dc-motor hall-effect or ask your own question.

7
Why Have Non-Zero Timing on a BLDC?
2
Detect multiple Hall Sensors on one input
3
How do single phase BLDC motors start in proper direction?
1
BLDC sensors placement
2
Where to place hall sensors (BLDC motor)?
0
BLDC motors, are hall sensors enough?
0
How does the gap between coils and magnets affect BLDCs
0
Induction Motor Rotor Position and Speed Control
0
Controller of BLDC internal vs external rotor