Say I have this very simple power supply: 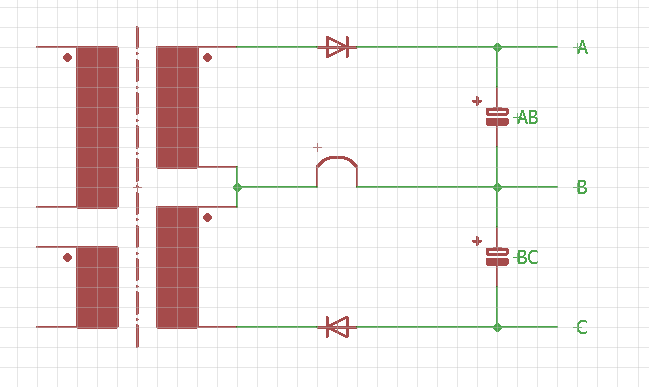 Disregard any problems with additional filtering, regulation, and the fact that the transformer's primary isn't connected. This is just a simplified example to show what the problem is. 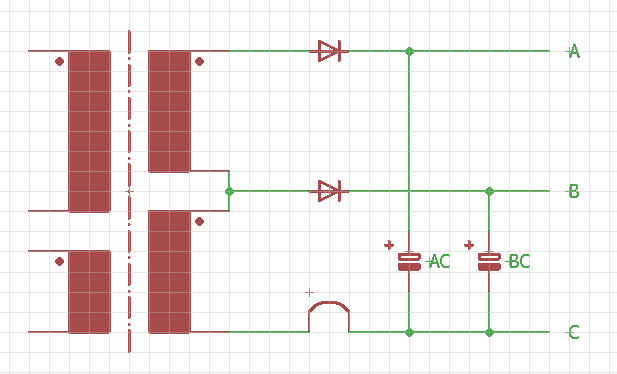 But for simpler routing it would be nice if I didn't have to to do that. I.e. if I could leave the capacitor AB where it is: 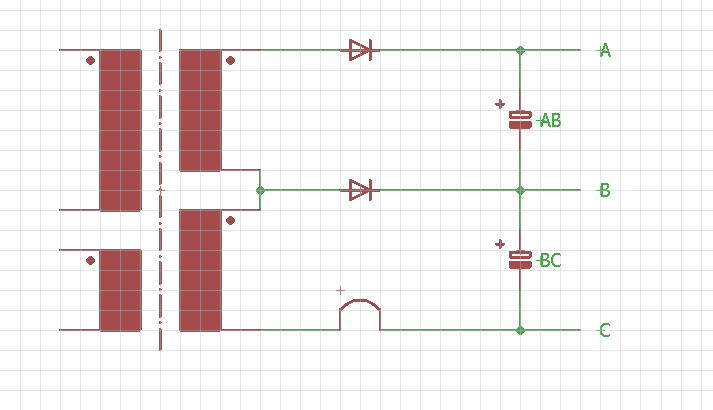 Variant 3
Ideally I would like to select the voltages simply by soldering the diodes (and jumper) into different positions while keeping the copper traces the same.
But the placement of the capacitor AB feels wrong.

What are negative (or possibly positive) consequences of doing it this way?
If I understand right, the effective capacitance between A and C in variant 3 is half of what the capacitor AC would provide in variant 2 (assuming the same capacitance for each idividual capacitor). I assume that makes it less effective at smoothing out ripples?

Please consider these details about my situation when writing your answer (if they are relevant), but a general answer is always appreciated:
This is part of a switching power supply at 132kHz (driven by a TNY268).
The diodes are MUR420.
The capacitors are 470µF electrolytic capacitors and you can safely assume their voltage rating is sufficient.
To the right of what's shown in the schematics above, there will be a 100µH inductor in all non-ground rails, and after those another set of the same capacitors plus 100nF ceramic capacitors.

FYI, variants 2 and 3 are worse, as the current from the top winding goes through the bottom, requiring thicker wire there (or more strands thereof). Better this way: 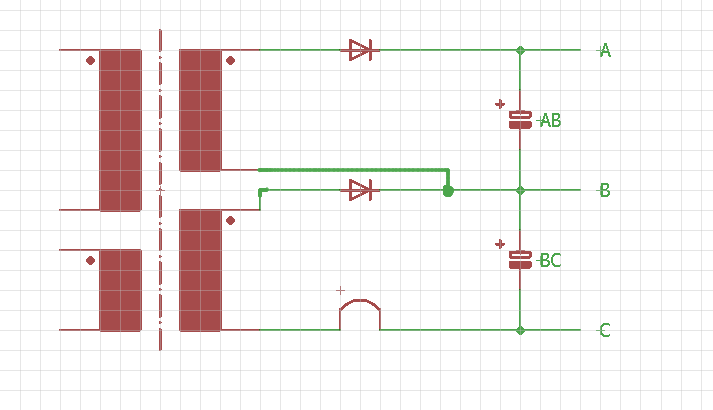 Which you will notice is just variant 1 with a diode flipped. You can put the diodes on either side, of course, as long as the phasing works out right. (Which sometimes helps for EMI purposes, putting it in the +V or GND return side. Depends on transformer windup, and if they're in tabbed packages, heatsinking.)

In any case, I don't get the motivation. What's wrong with the bipolar arrangement, and just defining the negativemost one as GND? Electrons aren't equipped with voltmeters, they won't judge you if you do something slightly out of order. :)

Similarly, after the chokes doesn't matter, up to a small difference in EMI (and, again, depending on transformer windup).

From what I've seen, a tapped arrangement is usually chosen when the lower tap doesn't need to deliver much current, so the windings can be equally sized, and it's literally just taking a tap out of a larger winding. And this is supported by the above argument about wire sizing. If the loads are similar, the bipolar arrangement is better.

Note that leakage inductance between the two secondaries can be saved, if they are common ground (in the AC sense -- as in this variant). A coupling cap placed between the dotted ends of the windings will serve to equalize their peak voltages, improving cross regulation. Works much as a SEPIC stage does, but powered by a separate flyback primary instead. Assuming the voltages are equal, of course! (Which is the case in this example, so it's relevant.)

Variant 2 would be reliable.

A dedicated capacitor for each supply would not only guarantee functioning of either of them, isolated from the loading effects of the other, but also facilitate tailoring of both of them to their respective loads. 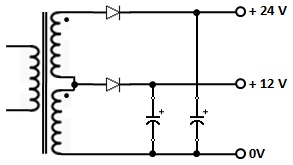 The transformer rating would be determined by the combined load and that of the diodes and the capacitors by the individual loads.