Why are cables rated for current not power?

Resistors are all the same size no matter the resistance. It's convenient for the manufacturer to test how much power a certain-sized resistor can take before it burns up. And it's the same for all resistors of that size. Also the power rating is the same regardless of the resistor's exact resistance (within the tolerance).

Cables with different current ratings are different sizes, so there's no such shortcut.

But actually, cables aren't usually rated for current. They're rated for their size, maximum temperature, and resistance, and you have to look up the current for that size, and you'll find a different answer depending on whether the wire is on its own, or in a bundle of other wires, or in a conduit, etc. That's because it's really the temperature that matters, not the current.

Cables are rated for power too, but somewhat indirectly. They have a stated thermal limit as well as a maximum working voltage (insulation strength). Nevertheless it's usually more convenient to think of their current handling capability since their primary purpose is to do exactly that: move current.

You arrive at the cable's current rating from the unit resistance for the wire, and its maximum allowed thermal rise. This sets a basic current limit for a given ambient temperature and environment (more about that in a bit, under Derating.)

Unsurprisingly, larger wires have lower unit resistance, will heat less, and therefore can carry more current before they heat up so much that they burn away or melt. Wires with higher temperature ratings can also carry more current. So can wires that have better cooling to shed the heat.

Given the complexity of figuring out all this stuff, for power cables they’ve worked out those limits for you and call it ampacity, a made-up electrician word that’s a portmanteau of, you guessed it, amperes + capacity, that states the safe current handling of cables in various environments and ambient temperatures. Multiply that ampacity value times the maximum voltage rating and you get the cable's ultimate safe power handling capability for a given environment. An ampacity table example is given below under Derating.

On the other hand, resistors are rated for power directly, again based on their allowed maximum thermal rise. Being resistors, they of course have a stated resistance; their allowable current varies inversely with the square root of resistance.

You may not have noticed this, but resistors are rated for voltage too. Physically-small resistors (like SMD 0402) have surprisingly low voltage ratings. This comes in to play when designing off-the-line or high-voltage electronics.

Finally, there’s one more concept that applies to both resistors and wires called derating. Simply stated, derating means that with higher ambient temperature and/or less-favorable cooling, the power dissipation allowed (that is, thermal rise) must be reduced to keep the circuit element within its safe thermal limits.

Cables used for power wiring use ampacity tables to specify derating. These not only use the ambient temp, but also the wire type and the cable's environment (e.g., open air vs. conduit vs. duct) to determine the safe current for that cable. 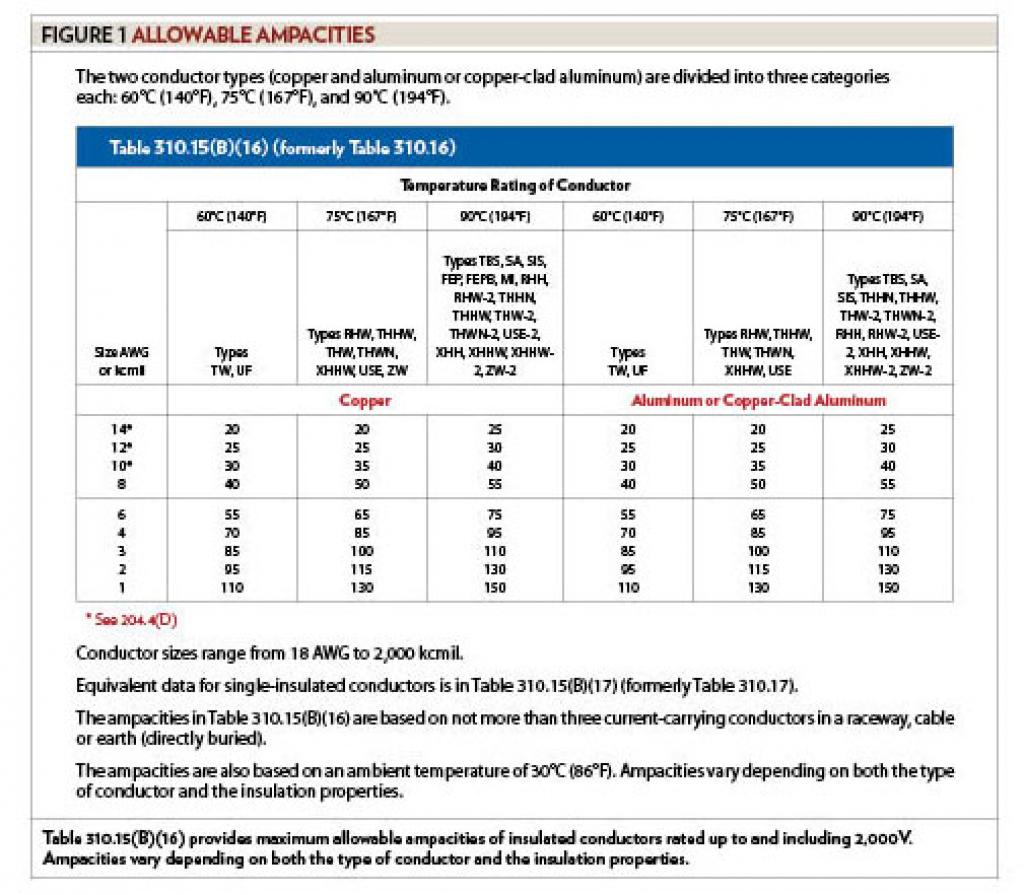 Resistors specify a maximum ambient temperature with an assumed environment, with derating applied linearly above that max ambient limit set for the device.

Cables are rated for power - it's just that it's not a useful way to think about it. The upper rating on cable size will be determined by how hot it gets before its insulation is damaged - and this will depend directly both on conductor size and insulation characteristics.

Cables aren't intended to drop voltage, they are intended to carry current with an allowable maximum voltage drop. Power can be expressed as either voltage and resistance or current and resistance. Since voltage isn't normally an issue, current is the dominant concern.

Cables are rated for safe V and A but W, loss depends on R load =V/A. not V*A=Wload

The temp rise in cables is the safety point for insulation which is determined by Loss power=I^2R per meter and the thermal R per meter. It is not VI = W into the load.

Here I am using units A=Amp, V=Volts, W=Watts rather than symbols like U or V for volts.

Normally wires are rated by Amps for a given wire gauge, yet insulation thermal resistance is high for electrical reasons may vary. The temp rise and Ratings are linked.

Ideally wires are 0ohm conductors which is acceptable if one compare them to motors, lights, etc. When people are talking about power, they intuitively think about the power of the motor, light etc.

In the setup you have a power source of known (almost) constant voltage, the actual load resistance. The only paameter that is to adapt is current.

As the wires are not ideal and they have, among others, nonzero resistance. But for the setup, resistance is known but voltage drop is not, the current is known instead.

Then we go what cause the wire to fail. It is either breaking the connection or connecting two wires that are not to be connected (usually hot-to-neutral or hot-to-ground). This can be achieved by excessive temperature melting/burning the insulation or melting/evaporating the wire by even more excessive temperature.

So any real wire is heating up by the current through it through Joule heat (u x i=R x i^2) and heat dissipation is cooling it down to ambient temperature. If the current is too high the tempreature will exceed the integrity margins, the insulation melts,...

If one keeps the ambient temperature within limits, the current ratings are the simplest ratings to tabelate. And to be honest, if you are about to lay cables where temperature is not expected to stay within safe limits you shall know what you do for sure.

Say you want to connect 2.2kW setup in the kitchen on one branch and you have 110V supply. Easy math say that 20A is the expected current draw, lets go for 25A wires at least. Job's done.

If the wires were power rated, and say in EU, you will get cables rated 2.3kW which seems almost safe. Nope, for this wattage they are expected for 10A load, because of 230V circuits, but you will draw 20A, you know. Fire! So tehy would need to be rated 2.3 kW at 230V to be safely labelled - which is 10A rating but using much more text.

Also you may choose between 3-phase connection or 1-phase. Then your cables would need to contain information about this as well. With just current ratings you can calculate the safety margins the way thet is more fool-proof or smartass-reppelent.

Wires, on the other hand, are sold and used by the foot and you can buy whatever length you want. The power you can make them safely dissipate is proportional to their length. It doesn't make sense to sell "6 watt wire", for example, because when you use 20 feet of it you can safely dissipate twice as much power as 10 feet of wire.

It would make more sense to sell, say, "6 watt/foot wire", but that's not convenient, because in order to calculate how much power you're dissipating in a wire, you'd have to know its resistance, and that's not on the list of top 10 things circuit designers are thinking about. Wire is supposed to be as close to 0 as possible, and the power lost to wires is generally small compared to the stuff that does real work.

So, instead of making you figure out the resistance/conductance of your wire and then multiplying by the square of current to figure out how much power is dissipated per foot so that you could compare it to a watt/foot limit... Kinds of wire products are rated in terms of current, because that is something you do know, and its square is proportional to watts/foot. The constant of proportionality depends on characteristics of the wire that are known to the manufacturer, but which you would usually rather not think about.

Wires DO have a power rating!!!

The power rating is how many watts per foot/metre of energy they can dissipate before exceeding their thermal limits.

This is exactly the same thermal limits as a resistor is concerned with.

As others have mentioned, cables do have power ratings, and power through a resistive element is proportional to current squared.

The reason we see the limited phrased in current terms rather than power terms is that current is easily measured and controlled.

Its very hard to measure power drop across a cable because it's typically a very small factor in the total power dissipation. This would make it very hard to prove that you are within the cable's limits, if all you had were power numbers.

Likewise, if all you have is a schematic, and you're trying to prove that it will be safe to turn a device on, current is a much easier thing to use. In a typical (non-short) situation, the current calculated assuming an ideal wire will be a pretty darn good approximation of the current through the real wire. (Obviously, power dissipation in an ideal wire is 0, so that's not all that helpful for modeling the safety of using the real circuit)

Resistors ARE rated for current. A resistor of a given value will have a max current it can sustain indefinitely. But since watts generated are a function of current times voltage, wattage is equal to I squared times R. And, for a given form factor, maximum wattage is reasonably independent of the particular resistance value.

So it's easier to spec resistors in terms of max wattage rather than max current.

Current and voltage ratings are given for cables whose purpose is to convey non-trivial amounts of current through wires whose potential may differ by a non-trivial amount. Although cables may dissipate power during use, that is not their intended purpose. By contrast, the purpose of a resistor is to consume energy from electrons that flow through it, so that the electrons that leave have less electric potential energy than the ones that enter. A "resistor" that didn't dissipate power wouldn't be functioning as a resistor, but either as an ideal conductor, inductor, capacitor, or insulator.

Not the answer you're looking for? Browse other questions tagged voltage power current resistors or ask your own question.

9
Limiting the short circuit current of a power supply
0
newbie question: can I plug a 250v power strip into a 120v power outlet (and then connect three 120v power adapters to the power strip)?
0
Using european telephone cables for own DC power delivery
0
Why is my RGB not drawing more current?
3
Why do we use low resistance cables to minimize power losses?
0
Is the maximum rated current of the cable the same for any voltage?
0
Why is SPP20N60S5 rated for more power than STW26NM60N?