Output signal is being attenuated after the Biquad filter direct Form 1, why?

Thought this would deserve a separate post on its own.

What's going on is that I finally got my low pass digital filter working on the STM32H753ZI using the PMODI2S2 peripheral and I noticed the output signal is extremely low ~340mVpp this is after the biquad filtering. If I take out the low pass filtering the output signal then raises to around ~600mVpp.

What's causing this phenomenon? The digital filter bode plot says the gain from very low frequencies up to the cut off is 0dB so I dont understand whats going on. The only thing I can think of is the biquad filter is causing an attenuation perhaps? 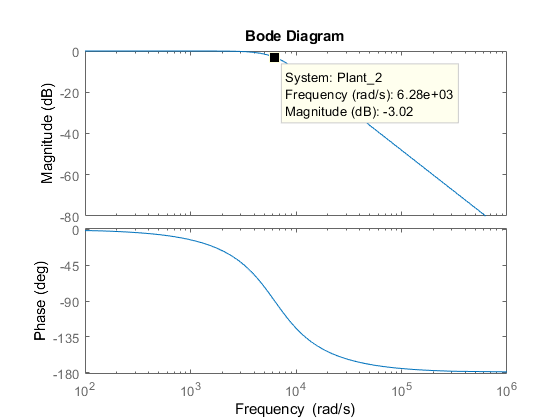 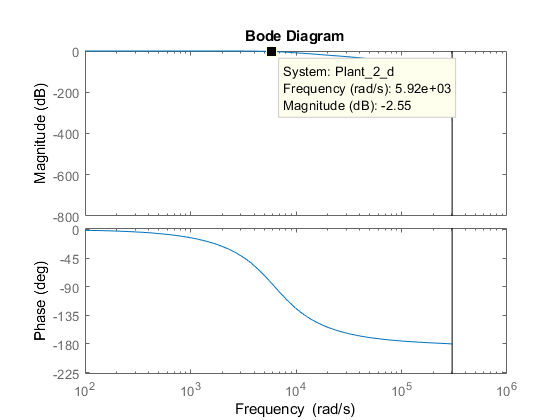 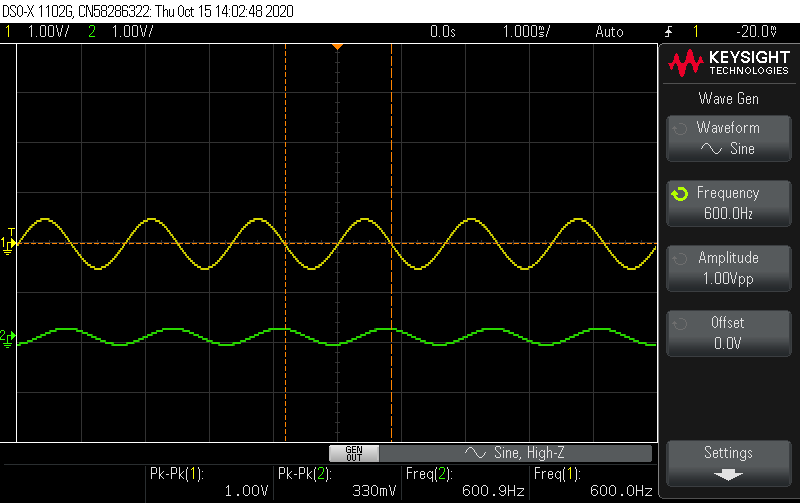 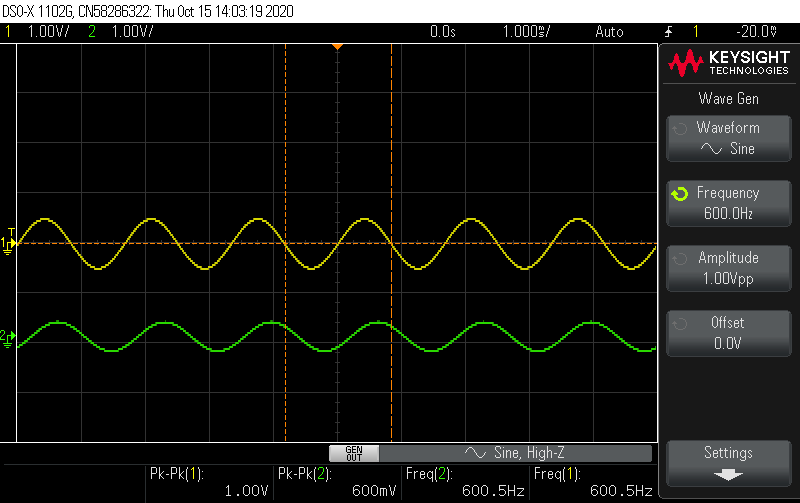 Bode plot from Oscilloscope with the biquad filter: 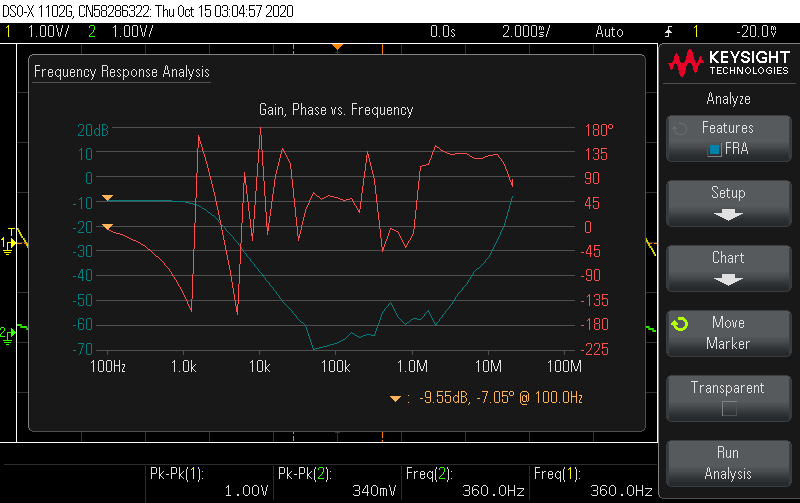 UPDATE 1: As requested doing a spreadsheet of different frequencies and a block diagram and a physical setup to show you guys.

If you are using the jack I/O of the Pmod I2S2, then there is a simple RC bandpass that will cripple your signal. You could try to bypass it either by probing directly after the filter -- straight on the input --, or bypassing the series caps with a wire -- which will still leave the parallel one to be a lowpass, but at higher frequencies (it looks like the -3 dB is at ~340 kHz, so you have plenty of bandwidth).

Be careful with bypassing, because those filters are not there without reason. You can't compensate in software since the series cap ensures you have 0 V at DC. You could add another cap in parallel to the 1 uF one, say 10 uF, and that will give you a boost of low frequencies up to 10 Hz for a fraction of a dB.

I tried to model the whole chain of filters and compare it to the readings in your table, this is the result:

The overall frequency response is fairly similar, slightly lower frequencies in the model, since it's an approximation -- there are various other I/O impedances that can affect the response. For now, let's assume they come close enough that they can be considered as having the same magnitude response. That leaves the gain. The RC divider at V(in) ensures an attenuation by 2, so 6 dB are accounted for. This can be verified by using a bypass on the biquad, which results in what you have seen before: a roughly 2x attenuation.

The rest of the dB are somewhere else. They cannot be in the biquad implementation, since the coefficients actually give a ~1.133 DC gain lowpass (slightly shelf, due to roundings). They cannot be somewhere on the STM board, since the bypass would have shown it. So that leaves the program, somewhere. At this point, I don't know the software part since I've never used an ARM, but in some of your comments you mention that increasing one of RxBuff, or TxBuff, results in an increased amplitude output. Maybe that's the key? Looking in the datasheet it only says:

However, if the cause is not found, it looks like it's only a matter of overall gain, which means that multiplying by a certain constant would solve the problem. After all, a multiply by 2.0f of all the B[0:2] terms would be necessary to compensate for the RC divider at V(in); making it 3.0f, instead, should compensate for the rest of the gain.

Not the answer you're looking for? Browse other questions tagged stm32 filter digital-filter or ask your own question.

2
Choosing between active opamp filtering or an LC filter
3
Why is Direct Form 2 (Digital Filters) equivalent to Direct Form 1
0
Help understanding 60 Hz low pass filter behavior in oscilloscope
4
Colpitts oscillator : having trouble while respecting Barkhausen criterion, is this criterion insufficient there?
6
Trying to implement a digital IIR filter why is this happening?
4
DSP low pass filter (IIR) no longer works when changed to a new MCU
1
Matlab Digital filter not working, how come?
0
Issues with a Sallen-Key low pass filter for turning a PWM into a DC voltage
0
Tow Thomas biquad filter output amplitude is increasing as I increase frequency
0
How to verify the voltage and frequency response in a simulated equalizer?