How can I spread the ground in an LED panel design?

I know that if I decrease the clearance between GND and VCC is the same as adding decoupling capacitors that will help in case of power supply voltage fluctuations. 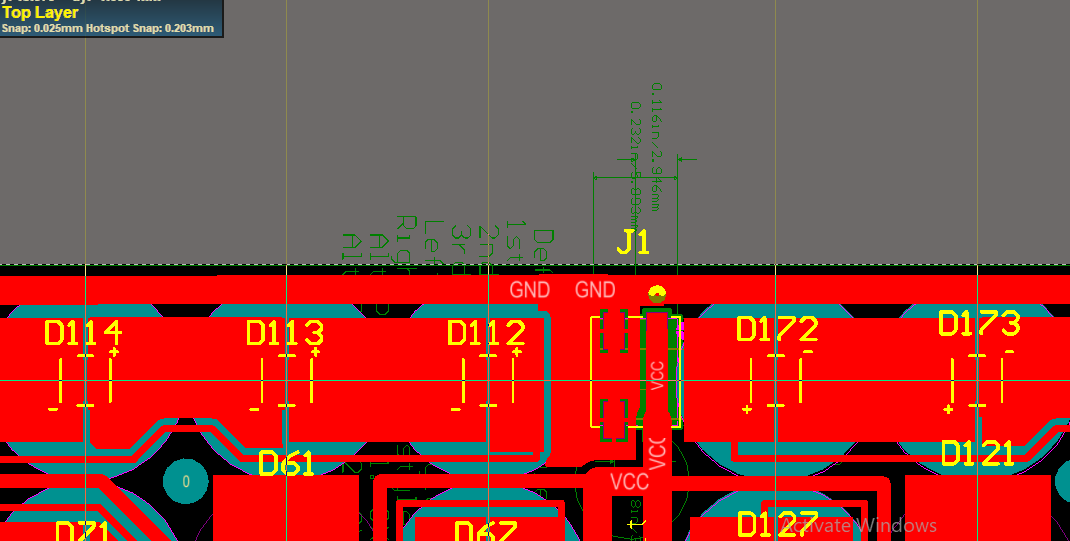 I know that if I decrease the clearance between GND and VCC is the same as adding decoupling capacitors that will help in case of power supply voltage fluctuations.

I can't be sure, but it seems that you haven't used the recommended footprint for the LEDs. With the recommended pads, the solder surface tension will hold the component in place. Without a proper pad to contain it, the LED will wander in the molten solder.

I'm not sure that I understand the second question, but the answer is probably no.

You can calculate the capacitance between your traces using the formula in this answer.

It will be very small, less than 1nF for the entire board probably, so negligible compared to a ceramic decoupling cap costing a few cents. It would be important if you were interested in crosstalk between one trace carrying a high frequency signal and an adjacent traces, but not for power supply decoupling.

Since LED power is 60W I assume this is a MCPCB. You'll get much more capacitance between the copper pours and the aluminium of the back than between the traces. This isn't important either. The LEDs have much larger capacitance than this anyway.

Note if your LEDs are wired common anode, I wonder what the GND trace does... unless the MOSFETs that switch the LEDs are close by? In this case you could add some ceramic caps as power supply decoupling. This isn't to stabilize power supply voltage, because LEDs don't care, but to keep high di/dt PWM switching currents in a small loop area on your board (instead of going through wires connected to it) and avoid EMI.

Not the answer you're looking for? Browse other questions tagged led pcb ground layout or ask your own question.