What is the phenomena behind this DC generator plot?

Can someone please explain what phenomena is behind the behaviour of the plot?

Why is that happening?

Electric machines and other power conversion equipment have both fixed losses and variable losses. Variable losses are proportional to current and fixed losses are not. For that reason, the efficiency of such equipment is zero with zero output and rises as the output increases. Usually, the efficiency initially rises steeply then less steeply reaching a maximum before leveling off or declining somewhat.

The fixed losses for a DC generator running at a constant speed include:

The variable losses include:

There can also be stray losses that may be revealed by a dynamometer test but not explained analytically.

If the output voltage of the generator is regulated, the regulator may increase the generator speed or excitation current as the load increases. That could introduce some variability to losses that would generally be considered to be fixed. Increasing the armature speed even a little will increase the aerodynamic drag torque is approximately proportional to speed squared and drag power is approximately proportional to speed cubed.

In Fitzgerald, Kingsley, Umans, Electric Machinery, 4th ed.1983, there is a very helpful graphical representation of 1-100 kW DC motor and generator losses shown below. Hysteresis and eddy-current losses are included. I took that as an indication that those losses are not significant in DC machines. However a comment by @Paul Ghobril prompted me to consult Khulmann, Design of Electrical Apparatus, 1940. There I found core losses exceeding armature copper losses in a 300 kW machine. 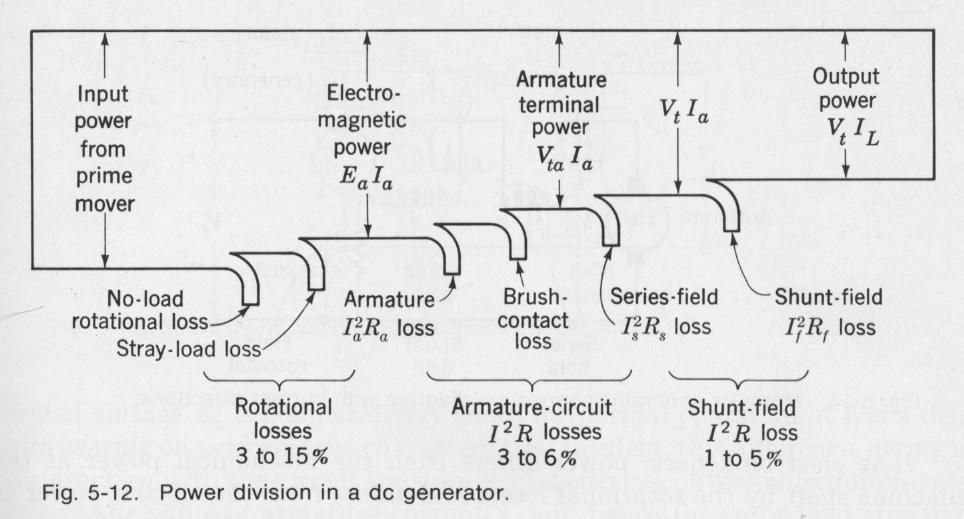 Nonlinearity of the machine ie. increase in armature resistance as temperature increases may be responsible for efficiency declining rather than leveling off near maximum load.

I suspect that some of the efficiency curve shape is due to insufficient data to draw a smooth curve. Efficiency vs. load curves do not usually have sharp deflection points as shown in the following example from Kuhlmann. 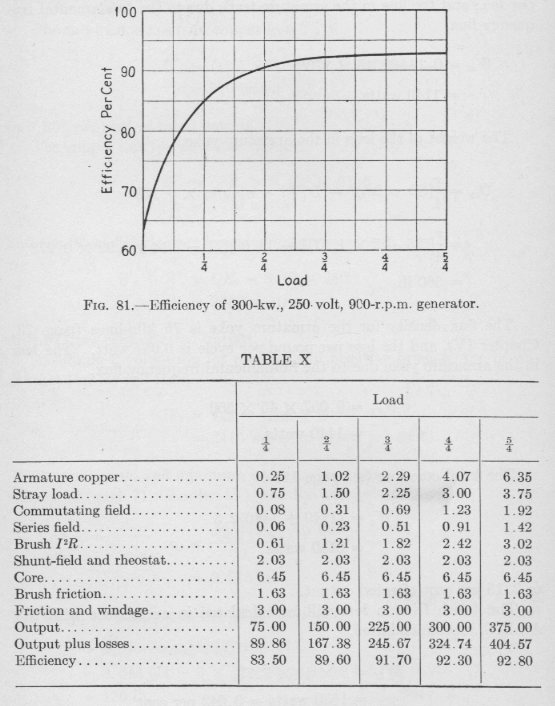 At low load (low used power) the efficiency is low because the power is at the same order of mechanical losses like the friction losses and losses of coupling the motor to the alternator and losses at the alternator like field, hysteresis and eddy current losses.

However when the load increases these losses will become low compared to the load power.

When reaching full load the generator becomes overheated which decreases the efficiency and also the counter torque coming from the load (magnetic) will increase to limit the capacity of the motor to deliver the needed energy.

Not the answer you're looking for? Browse other questions tagged power-supply power dc generator efficiency or ask your own question.