(Okay so I've been informed that you're supposed to edit your existing post and not make a new one even if you want to change the question, so just FYI for anyone reading the comments, this is slightly different than what was originally here.)

This is a new version of the old question that should be more specific/answerable. I think I gradually figured most of this out, and the schematic has more notes in it now to explain.

However, the problems come in with that pull-up R24, which I can't really skip. It pulls the line up to the battery voltage, which could vary from 18V up to 50V depending on number of batteries (24V/36V/48V).

Unfortunately even the lowest of those voltages is way too high for the Arduino (the enable line of the regulator can tolerate Vin fine.)

I managed to protect P-Hold with a small N-MOSFET, but as for P-Detect, well I can only find MOSFETs that can handle a Vgs of +/-20V, which is a problem for connecting gate to 50V.

So instead I'm thinking of using a Zener diode voltage regulator. If I use a 5V Zener backwards from P-Detect to GND, that would pull the voltage down to 5V at P-Detect, correct? But it will also basically short 5V-EN to GND unless I use a very large value resistor between the Zener and D5/R22.

From what I calculated, 3M ohm should work (I'm using a 3M ohm resistor elsewhere in the circuit so it'd be convenient.) Would reading the state of the button through that large a resistor have disadvantages? 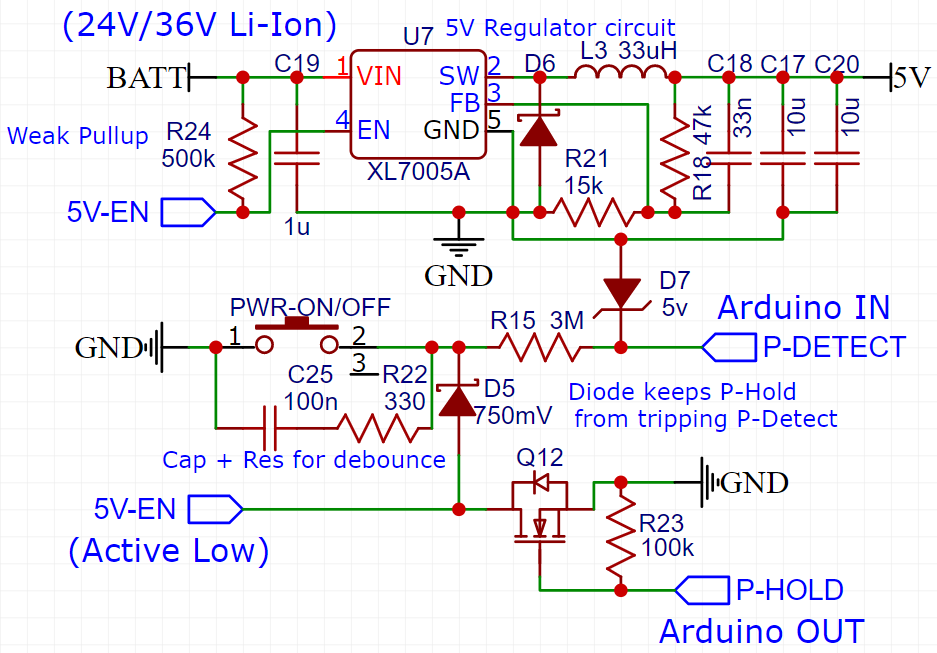 So I'm not sure if this is a final solution/answer, but it seems pretty solid.

Based off @Bruce Abbott's comment that the regulators possibly can't take over 7V at the EN pin, I realized I could move my Zener diode regulator over to the pullup side. Then I can connect the Arduino pin (P-Detect) directly to the button like this: 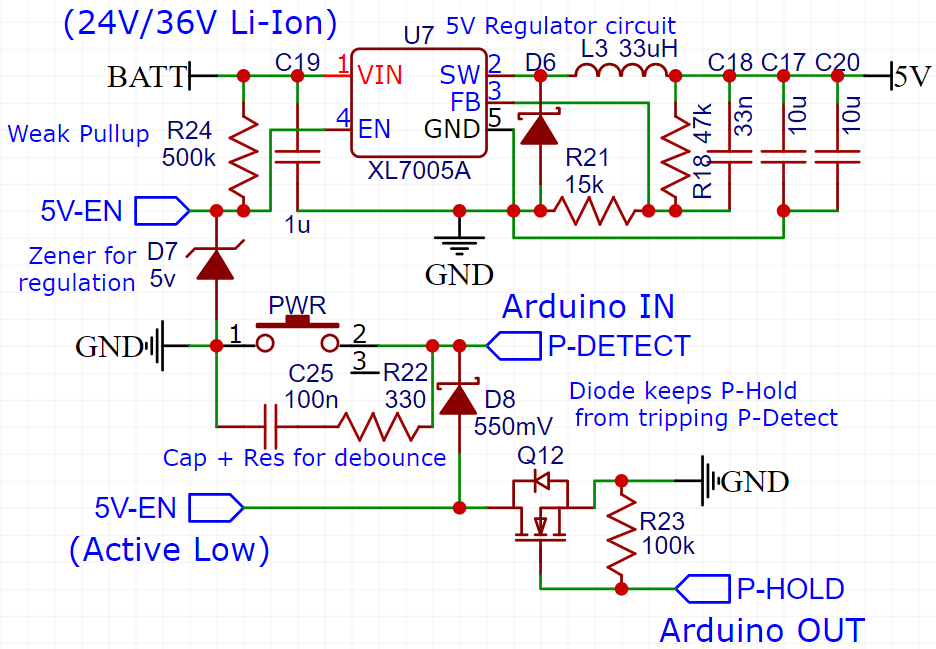 Not the answer you're looking for? Browse other questions tagged microcontroller arduino voltage-regulator enable or ask your own question.

3
How do I make a switch on the Arduino?
10
Protecting Microcontroller Input Pins from Soft Power Switch
3
Arduino IR practice vs. application circuit on 1838 datasheets
30
Smart ways to detect a button (less power consuming)
3
Arduino Self Power Circuit
1
Arduino battery power stay on for button - Not quite working
4
Pressing a physical button, but digitally using an Arduino in an existing circuit
1
DSLR Hotshoe wiring to Arduino revisited - I'm getting false triggering. How can I overcome that?