How to create a cycling clock circuit from scratch? 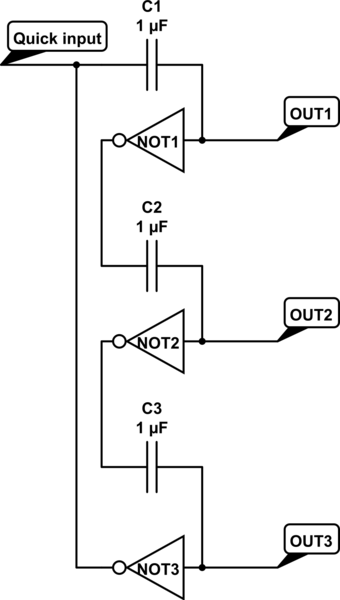 What you're proposing is called a ring oscillator. They do get used inside ICs for example, but it's bound to give you some headaches if you're attempting to make it from ordinary parts on a breadboard.

Instead, go digital. Use a normal oscillator (yes, even a 555) and make a count sequence with two flip-flops and some gates. The circuit below is a Johnson counter, sometimes called a 'walking ring' counter, decoded with 4 AND gates to produce a 4-bit pulse train: 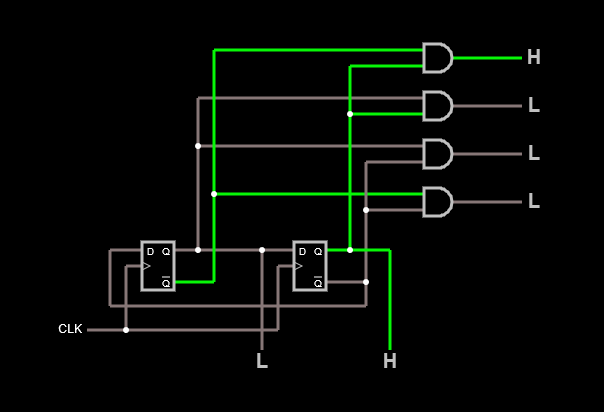 The benefit of using this approach is that the pulses are exactly timed, and because the counter changes only 1 bit at a time, the pulses are free from glitches.

As far as simulating a 'computer', that's a larger problem. A very basic system has the following elements:

You can make these from chips, and there's online tutorials on how to do that for well-known devices like the 6502 or 8080.

Really, though, much easier to simulate this stuff using a hardware description language like Verilog or VHDL. You can get free eval tools from FPGA vendors to do that.

If you're comfortable with C, Verilog should be an easy transition. VHDL is more powerful than Verilog in some ways, but it is much wordier. The split is something like C vs. C++: FPGA people tend to use VHDL because they value its abstraction and strong typing (like C++); chip people tend to use Verilog because they value its low-level explicitness and weak typing (like C).

Still others don't care, and use something like Matlab or some other high-level flow to generate HDL code.

There are also graphical sim tools like Logisim that kind of work, but I don't think they work that well for bigger projects. You soon reach a point where the design resembles spaghetti, constrained by how you can draw it.

I've introduced you to a simulator: Falstad. It's pretty great for quick sims. Of all the sims I've tried it does the best job at visualizing the circuit - especially tricky ones like the ring oscillator you proposed. It has lots of examples (yes, even the 555 - it's there too).

On the other hand... <insert hate for CircuitLab here.>

Not the answer you're looking for? Browse other questions tagged circuit-design clock or ask your own question.

2
Clock circuit layout techniques
0
Can this shift-register circuit be simplified?
1
Create multiple clocks on FPGA or create clock dividers
1
How to theoretically determine max clock speed for a circuit?
3
555 and loudspeaker - Beginner question
3
How to create square wave circuit