I have a piezoelectric disc, and I'm trying to use to build a primitive sonar. I connected the disc to an oscilloscope and if I press very hard on the disc, I see that the voltage can spike pretty high. I'm not sure how much current there is.

In an application with a piezoelectric device, should I use a voltage regulator on the output of the piezo, and would that protect my circuit on the other side? I want to connect it to an ATTiny85 without frying the chip.

Reset to default
0
\$\begingroup\$
This question's answers are a community effort. Edit existing answers to improve this post. It is not currently accepting new answers or interactions.

How to protecting circuit from piezoelectric disc voltage spike

The voltage spike might be as high as 30V. You can use a zener to clamp the spike, and NTC inrush current supressor to limit current. See appendices below for more details. 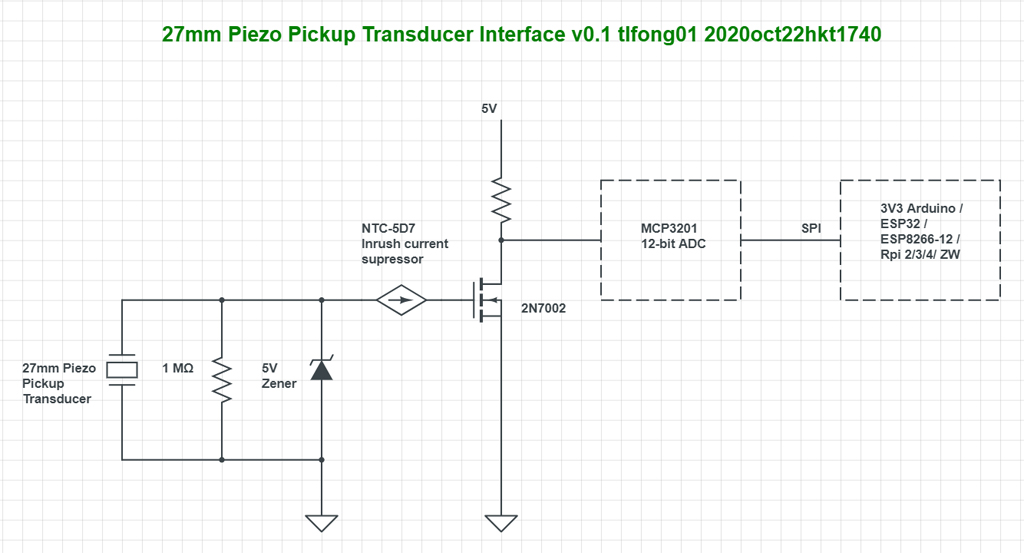 (1) It is not absolutely necessary to use the ICL (Inrush Current Limiter) NTC thermister to suppress the inrush current. An alternative is to use a series current limiting resistor, say 300Ω. However the NTC-5D7 with only 5Ω resistance should have a better performance.

(2) It is not absolute necessary to use the SPI 12bit single channel ADC MCP3201. The Arduino's GPIO pin with 10 bit rseolution should be OK to do the preliminary testing. For highly sensitive applications, higher resolution ADC, 16-bit, 24-bit can be used.

The MCP3201 is chosen for the following reasone: (a) Single channel MCP3201 is easier to learn and program than the though much more popular 8 channel 10 bit MCP3008. (b) I have written a tutorial and a fully debugged python demo program for MCP3208. So those not using Arduino, eg, Rpi, BBC Micro-ibt, Cortex M0 etc can use micro python or circuit python to run my demo program, with little program modifications.

(A) Characteristic of the piezo pickup used in this answer

Appendix A - Characteristics of piezo poickup used in this experiment

My previous schematic has a typo error. The parallel resistor should read 1MΩ. Many thanks to @tomnexus for point out my silly mistake. 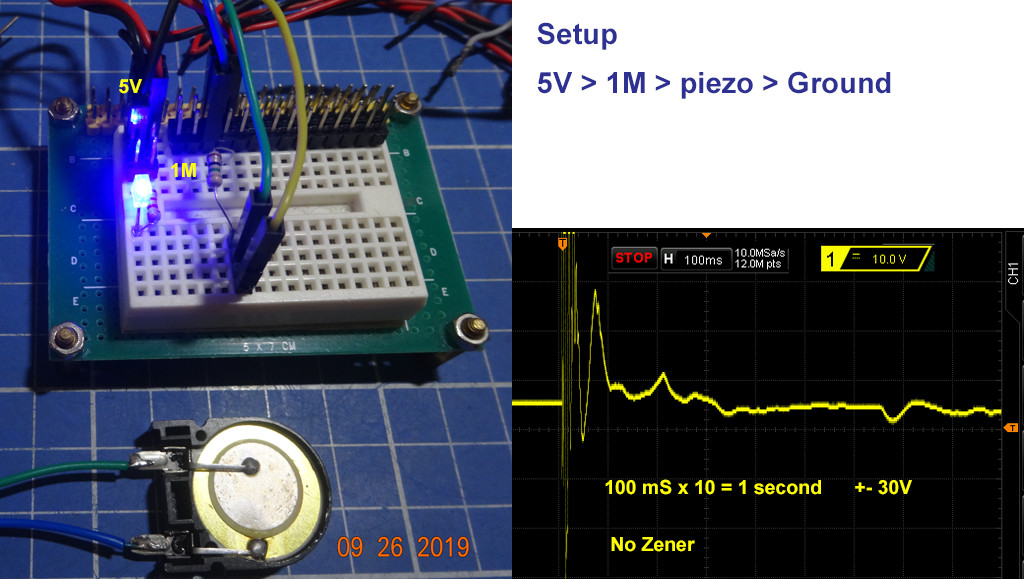 The voltage spike can be as scary high as 30Vpp, But the duration is small 100nS. If the human finger lightly taps/knocks the piezo disc, the mechanical energy transferred to the piezo disk should be of the same order of the 5V electromagnetic buzzer's little hammer hitting the bouncing steel spring bar. It is tedious to use my scope's one shot trigger to display my tapping of the disc. So I used the buzzer to display the repeatedly back EMF voltage spike. I did use my scope to zoom in the spike and found her a pretty little wavlet, so I took a selfie picture for her.

Warning to the OP:

(1) But if you are using a big hammer to hit a big disc which is part of a percussion musical instrument, then the spike might be as ridiculous high as 1000+ volts! and for pretty sure fry your ATTiny85.

(2) Me only a friendly electronics hobbyist. No guarantee no nothing won't melt down or blow up, or electrocute a cat.

As a result of the load current, the thermistor heats up and reduces its resistance relatively slowly to the point were the power dissipated across it is sufficient to maintain its low resistance value with most of the applied voltage developed across the load.

Due to the thermal inertia of its mass, this heating effect takes a few seconds during which the load current increases gradually rather than instantaneously, so any high inrush current is restricted and the power it draws reduces accordingly. Because of this thermal action, inrush current suppression thermistors can therefore operate very hot in their low-resistive state. As such require a cool-down or recovery period once power is removed thus allowing the resistance of the NTC thermistor to recover sufficiently ready for the next time it is needed.

NTC thermistors provide protection from undesirably high inrush currents, while their resistance remains negligibly low during continuous operation supplying power to the load. The advantage here is that they able to effectively handle much higher inrush currents than standard fixed current limiting resistors with the same power consumption.

Please post a circuit when asking questions. A parallel resistor with a proper value is what you need. The current isn't high. The first circuit is with Arduino. The second circuit is recommended. 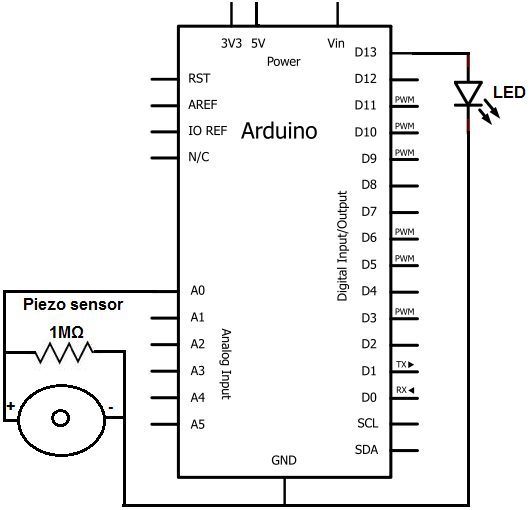 The circuit shows a 1MR resistor.

And the best way, but you have to reduce the voltage to 5V or 3.3V, depending on your MCU. 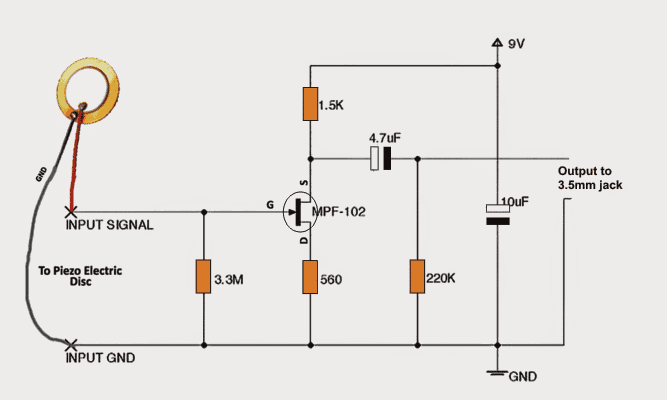 You can always use a standard sonar sensor, but they are expensive.

Not the answer you're looking for? Browse other questions tagged voltage-regulator attiny piezo attiny85 or ask your own question.

0
Why does current flow through 1M resistor in this case?
3
SPI slave randomly missing bits in response
1
Help with piezoelectric circuit
0
How to limit Inrush current from a DC motor?

2
How to prevent DC motor from dropping voltage of supply when switching on
0
Converting small AC output voltage of a piezo element to DC without IC
0
How to add a capacitor and switch correctly to piezoelectric circuit?
1
60Hz hum with piezo disc
1
ADC for many piezos at once
0
How to switch on/off RFID using piezo sensor?
1
Is it possible to suppress oscillation at reactive load (non inverting amp)
0
How to protect an op-amp against high inrush current following a high input voltage pulse?
1
Why doesn't the Attiny85 work in this circuit?