Why is the 8061 microcontroller described as having 256 bytes of internal memory? 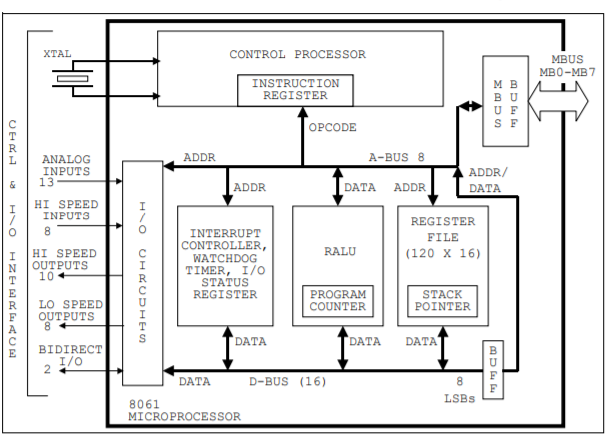 Is the 256bytes of internal RAM in the instruction register? (which I assume Consists of the address and instruction register(among others as stated here https://cs.calvin.edu/activities/books/c++/engr-sci/WebItems/Chap05/ComputerArchitecture.pdf) ?

The Memory Map doesn’t show this as well.

If according to the notes on the memory map, the 256 locations are on chip and refer to the internal register file then what would be considered external? 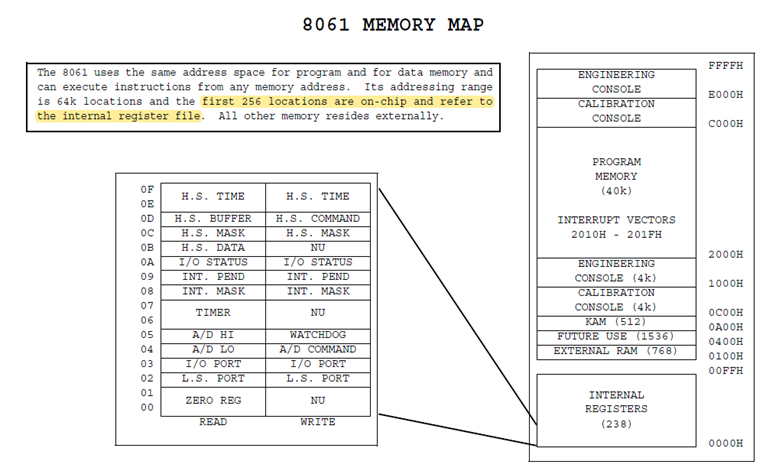 Their terminology is sloppy IMO. In any case:

There are only 240 bytes of SRAM. If you need more SRAM than this, you can add more externally via the MBUS.

The 8061 was a Ford-specific engine control product from the 1980s so the information available is pretty sketchy.

Assuming it's similar to the 8096, the first 256 bytes of the memory map are devoted to the special functions registers (first 16 bytes) and some RAM at the higher locations.

Everything else is provided by external logic decoding of the address bus and external EPROM and perhaps RAM chips. The microprocessor expects EPROM to start at 0x2000 and the interrupt vectors need to be there.

It's unclear what "KAM" refers to, probably "Keep Alive Memory" (battery backed) but it also looks a bit like shameless pandering to the automotive engineers. The 8096 has some internal battery-backed memory (top 16 bytes of the internal memory) but all the 8061 memory map locations on the right of your lower graphic appear to refer to some particular development system used in ECU development.

The remaining 16 bytes are control registers at addresses 0x00 -> 0x0F, and you've got a map of those in your question.

Not the answer you're looking for? Browse other questions tagged microcontroller microchip microprocessor intel chip-design or ask your own question.