Effect of right half plane zero on bandwidth of control system

As you know, poles and zeroes are the respective roots of the denominator and the numerator of a complex transfer function. Once they are known, they can be placed on a map - the \$s\$-plane - depending on their real and imaginary components. The below drawing shows an example for a transfer function featuring one zero and three poles:

The left-side of the map is called the left-half-plane abbreviated LHP while the right-side is the left-half-plane or RHP. Depending on the real value of the roots, poles and zeroes can be in either side. Without entering into the details (the literature abounds on the subject), you can infer the position of the zero or the pole if the transfer function is written in the following way for a pole: 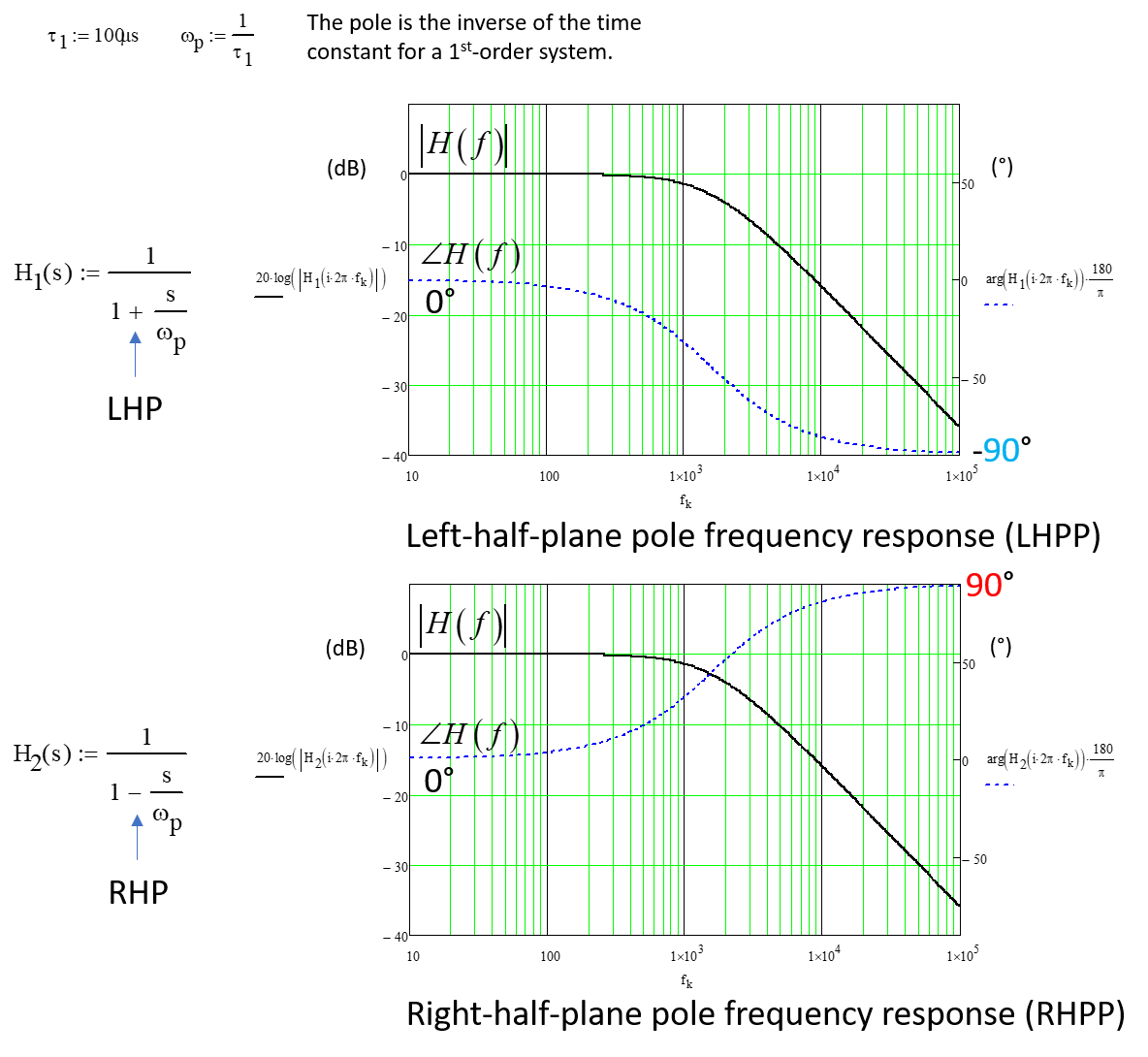 In the above drawing, the "+" indicates a pole located in the left-half plane, leading to a damped response. The phase starts from 0° and asymptotically hits -90° as frequency approaches infinity. This is a classical pole also named stable pole. Take the same transfer function and replace the sign by a minus, and you propel the pole in the right-half plane to make it a RHPP. The magnitude response is unchanged but the phase response is now the opposite as before. It still starts from 0° but increases to 90° as frequency approaches infinity. Having a RHPP in the open-loop gain implies a robust compensation strategy bringing the pole back in the left-half plane once the loop is closed. A control system featuring a closed-loop transfer function with a RHPP cannot be operated.

Similar observations apply to the zero whose phase response also changes depending where it stays in the \$s\$-plane: 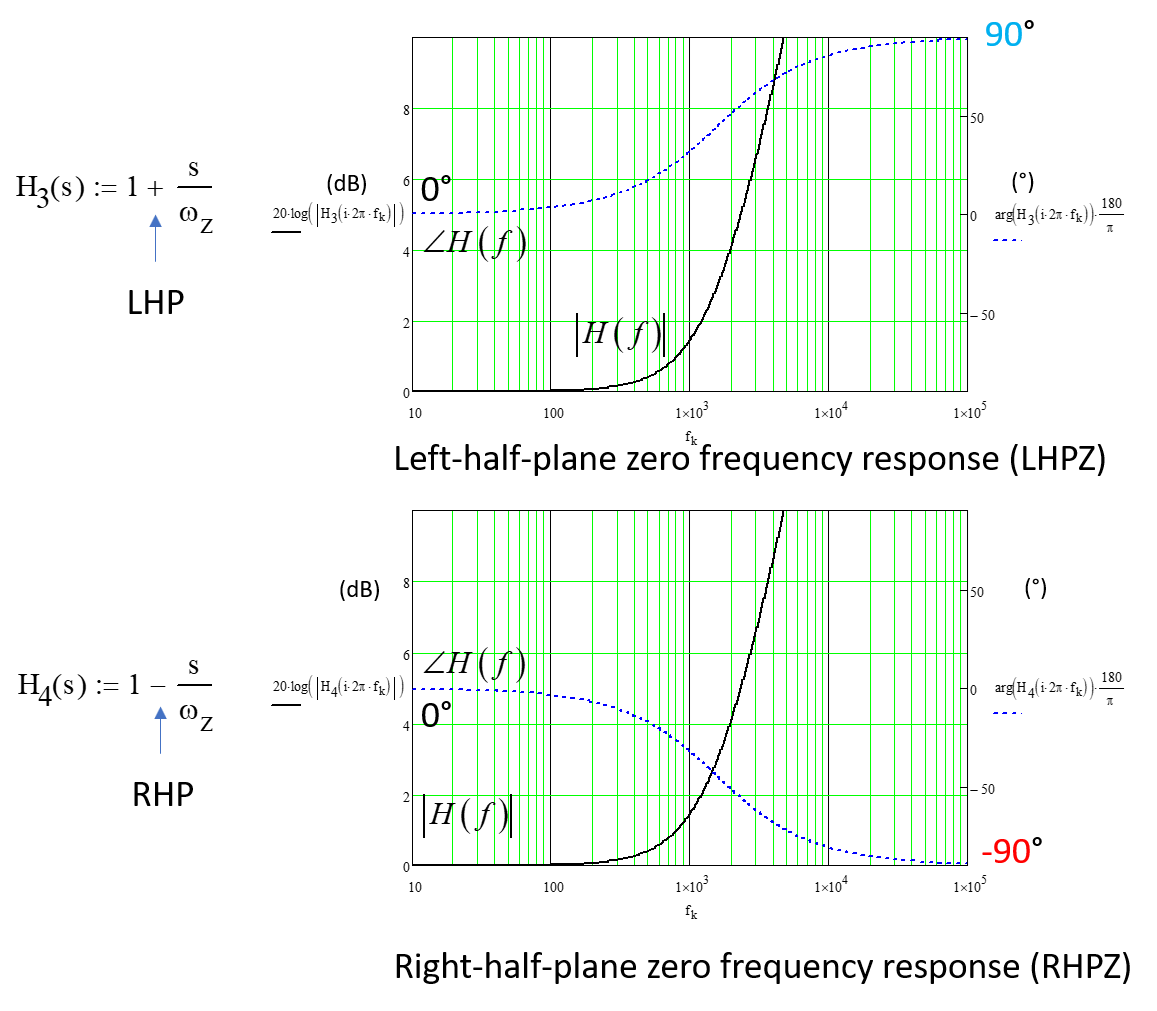 With a LHPZ, the phase starts from 0° and increases up to 90°. We say the zero boosts the phase when it appears in a transfer function. Now take the same zero and push it in the right-half plane then the phase response changes: the RHPZ no longer boosts the phase but lags it down to 90° as frequency approaches infinity.

Let's have a look at a transfer function having a LHP zero and two poles. The response is shown below. The phase response of the process to be compensated nicely lands to -90° as the LHP zero response compensates the lag of the high-frequency LHP pole. 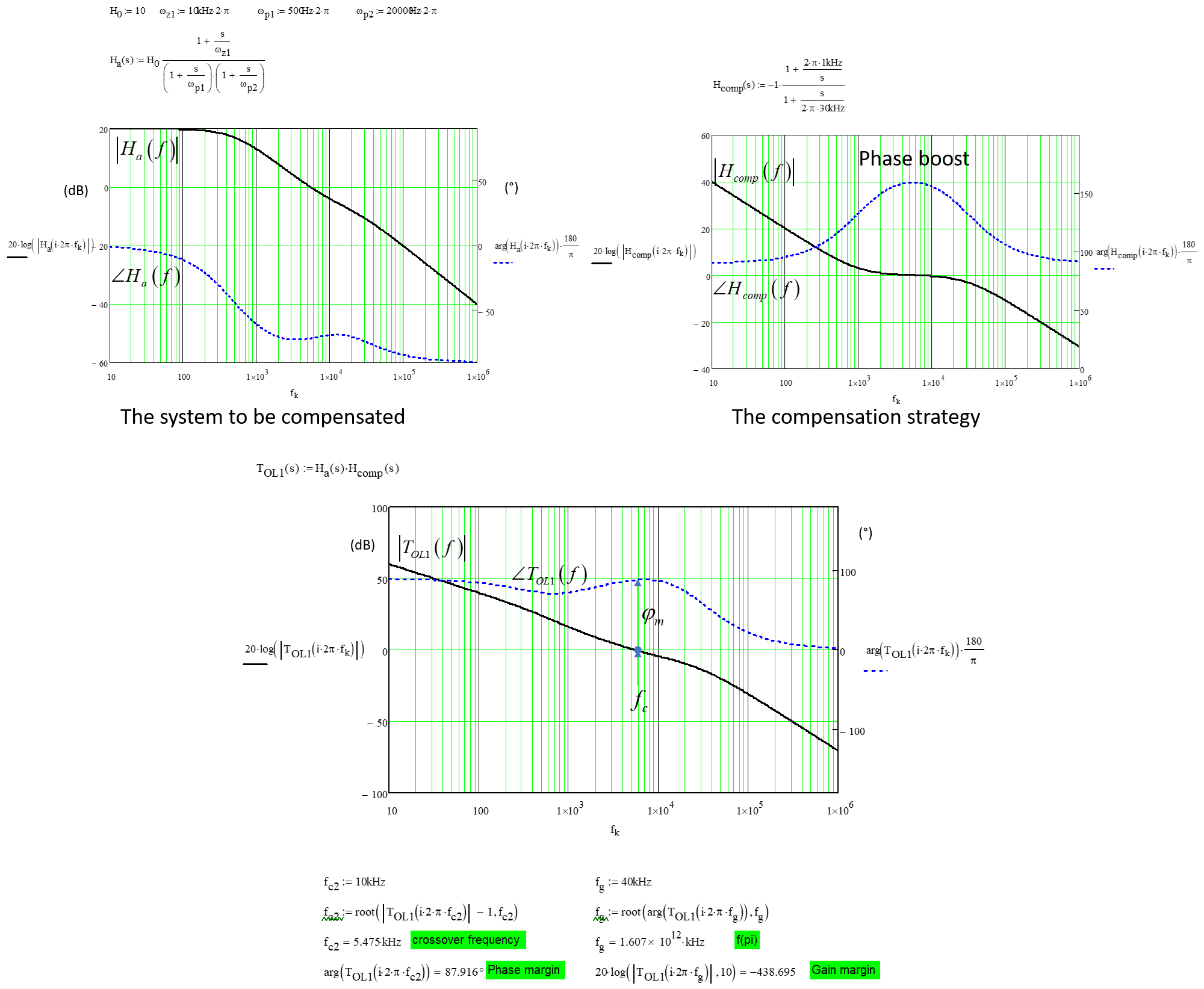 Assume you want to crossover at 5 kHz or so. You think of a compensation strategy featuring some response to obtain a good phase margin at 5 kHz. I have arranged a pole and a zero to meet this goal as shown in the low side of the above drawing.

Now, think of the same transfer function but having an extra RHP zero on top of the existing LHP zero. The plant response is no longer the same with the RHPZ arbitrarily placed at 8 kHz: 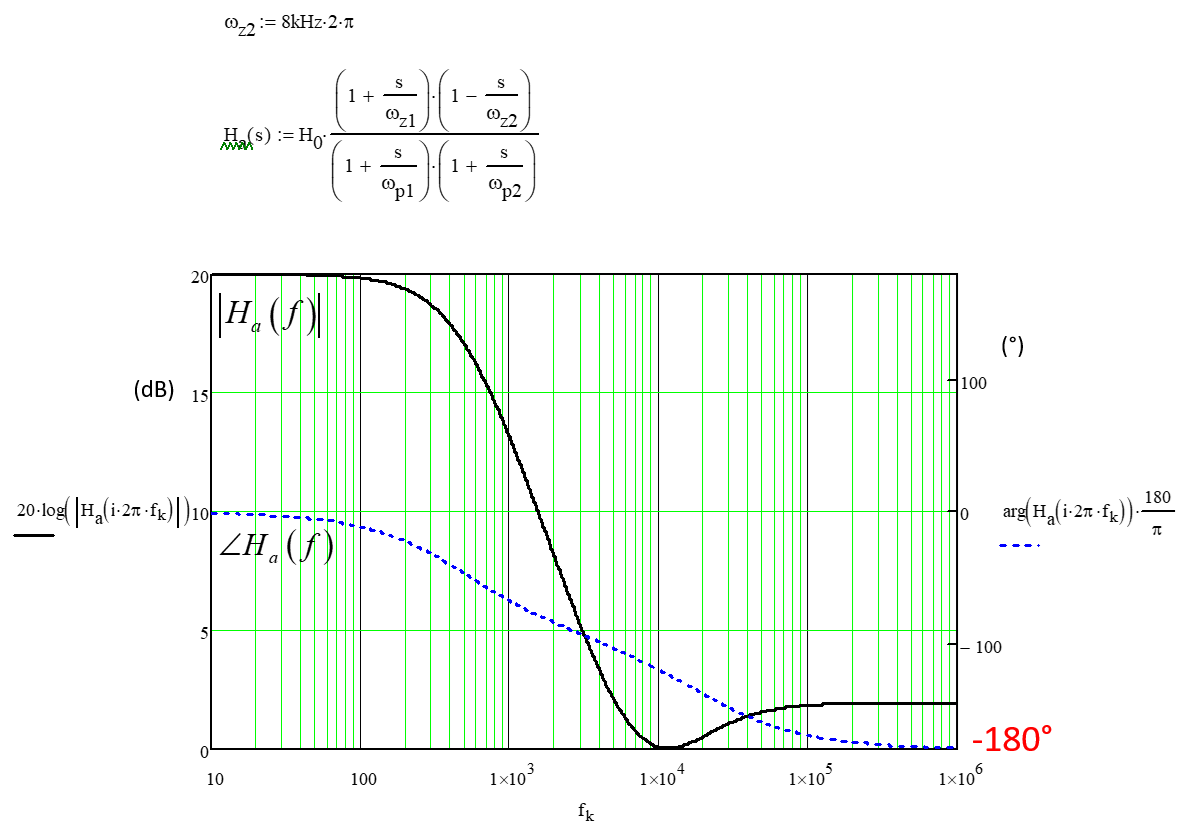 The phase now hits -180° at high frequency, consequence of the RHP zero. Should you try to keep the same compensator, the phase margin would no longer be as high as before: 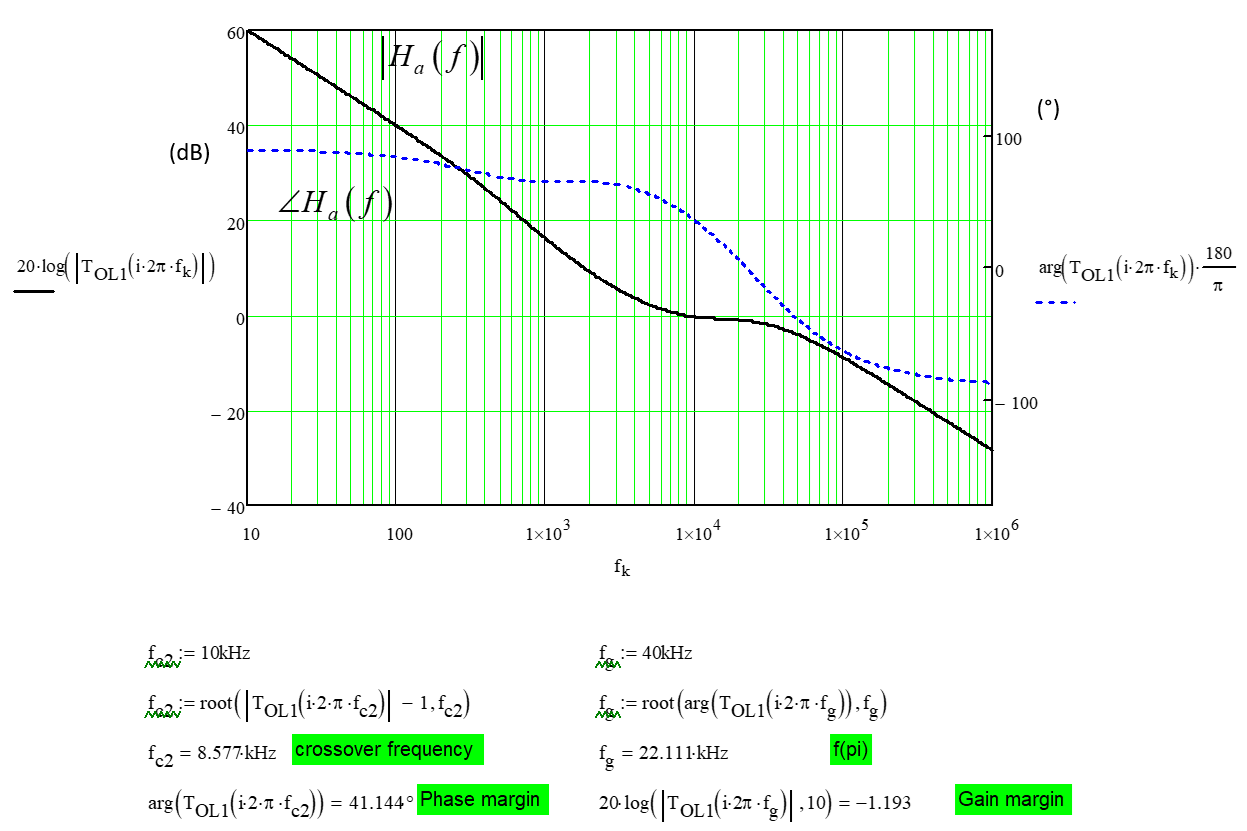 To maintain a good phase margin despite the RHP zero, you will have to crossover at a lower frequency, where the effects of the phase lag brought by the RHP zero are less observable. In other words, stay away from the RHPZ and its phase stress. By doing this, you slow down your converter but enjoy an acceptable phase margin: 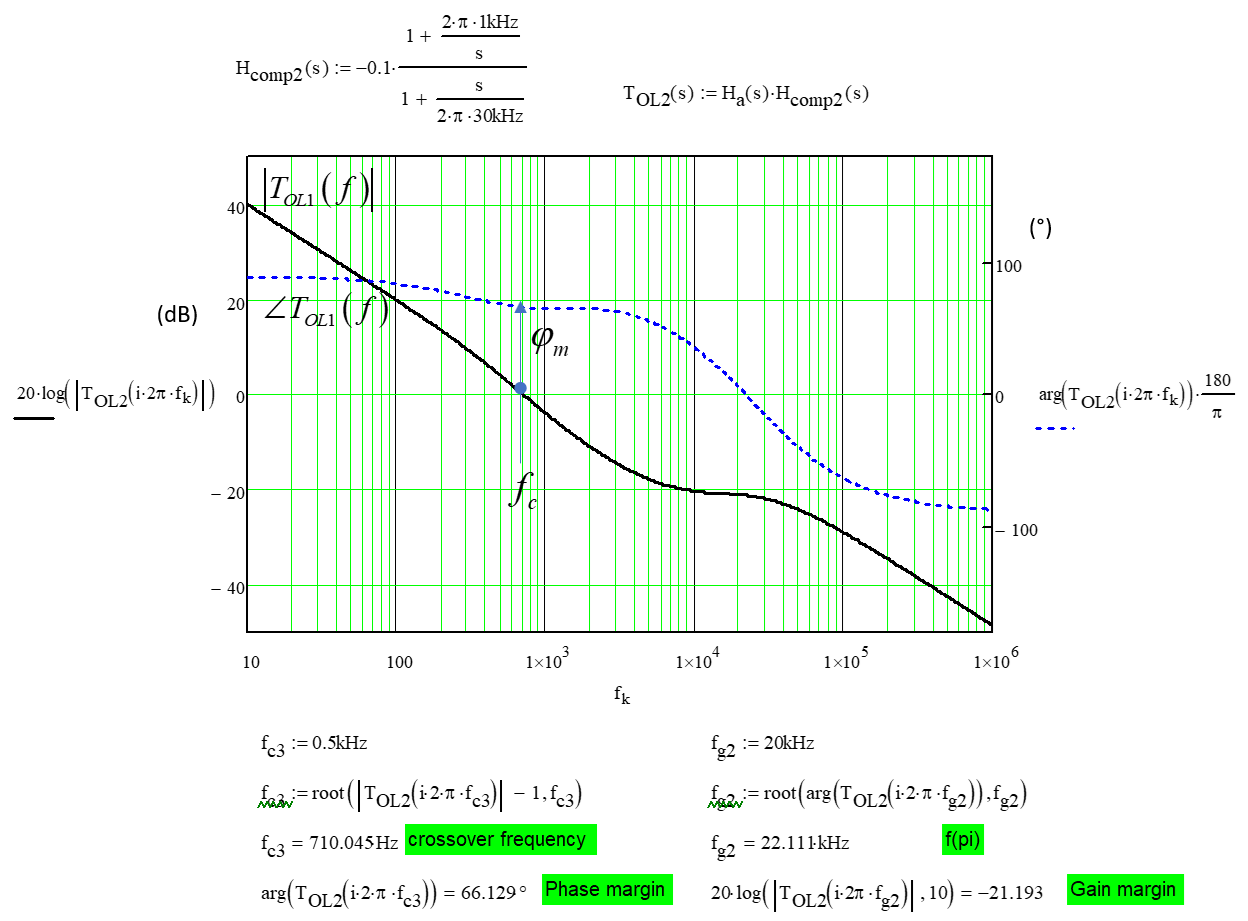 Now let's see what it implies in terms of control system. I will take the example of a switching converter as it is my field of expertise. Think of a converter transferring the energy in a two-step approach, like a boost or a buck-boost converter: first you store the energy in the inductor during the on-time then transfer it to the load during the off-time. Should a sudden power demand occur, the converter can't immediately react and must go first through another storing-energy phase before answering the demand. This intermediate phase naturally introduces a delay in the response to a change: the current in the inductor has to grow cycle by cycle (it cannot instantaneously jump to the next current setpoint) but this current increase is hampered by the inductor value and the available volt-seconds. The mathematical model of this delay in the response is the familiar RHP zero which appears in the control-to-output transfer functions of the said converters. The only way to stabilize them is to select a crossover far before the RHPZ phase lag brings troubles. Usually, people adopt a crossover placed 20-30% below the worst-case RHPZ position.

A pure delay also introduces a phase lag while its magnitude is constant to 1 or 0 dB. It can be inserted in the transfer function as shown below. This is excerpted from an APEC seminar I taught in 2012 The Dark Side of Control Theory: 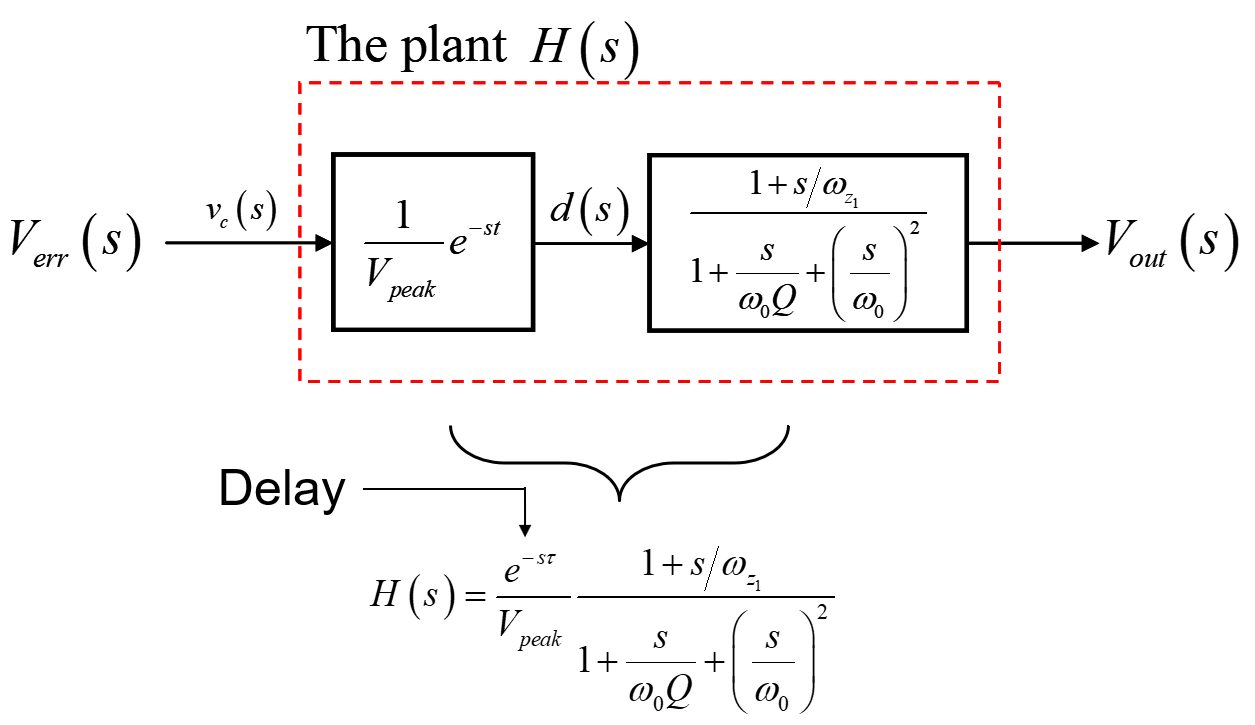 This delay \$\tau\$ which in Laplace can be expressed as \$e^{-s\tau}\$ will lag the phase and affects the plant response. The phase margin can suffer and you should account for its presence (and variability) especially if you shoot for a high bandwidth. Delays are caused by propagation times, conversion times etc. Here, you see that a 250-ns delay incurs a phase lag of 9° at 100 kHz. Not a big deal if you plan on closing the loop for a 1-kHz crossover but if you shoot for a much higher figure, you need to account for its contribution. 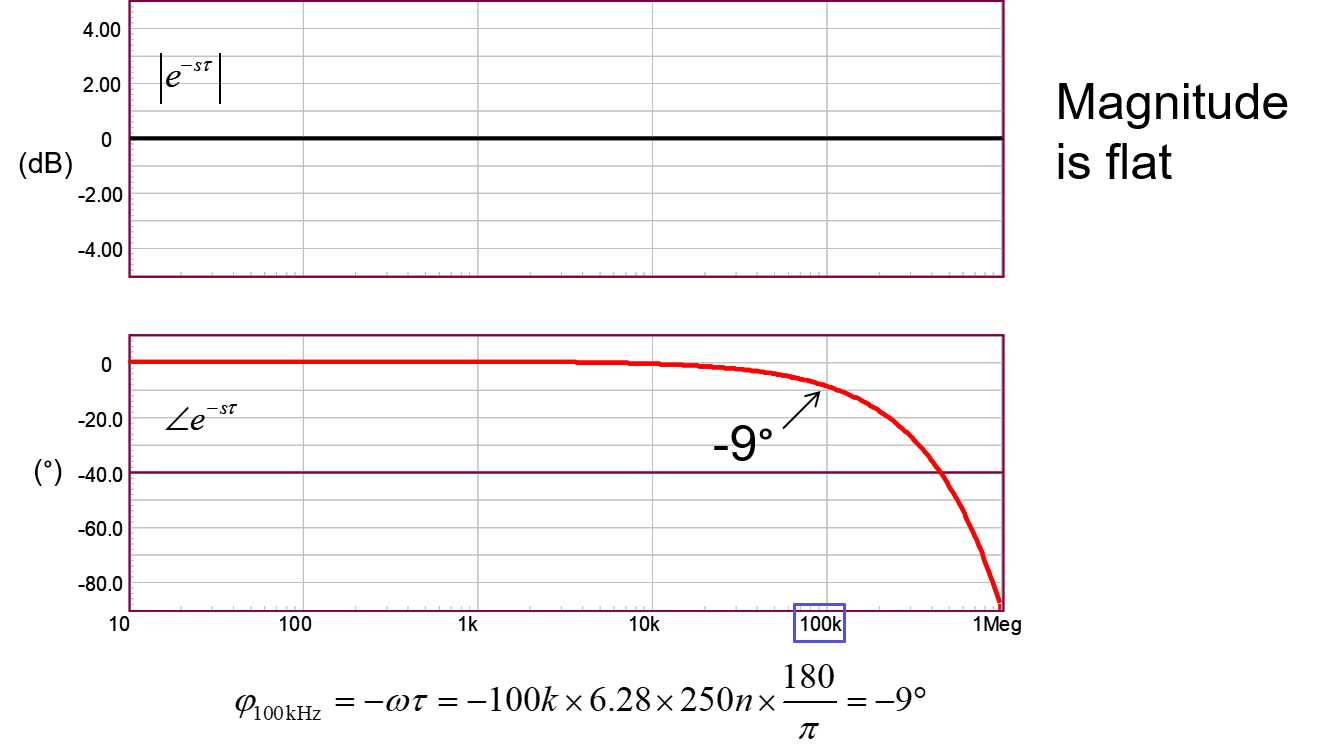 Finally, keep in mind that the Bode stability argument is meant for minimum-phase transfer functions (no delay or RHP poles and zeroes in the expression). When delays are present, the Bode plot can mislead you in determining the system stability.

The root locus would show the closed loop pole being attracted to the zero, hence pulled to the right and becoming slower, thereby reducing the bandwidth.

A pure time delay can be modelled as a first order Pade approximant:

Not the answer you're looking for? Browse other questions tagged control control-system or ask your own question.

4
Practical Limit of Feedback Control Systems WRT Bandwidth
0
Does this article's appendix contain an error (is the heating system described integral control)?
1
How to compute the sensitivity of this control system?
0
Relation between bandwidth, response time and disturbance rejection for a control system
0
How to find the time constant of a water tank control system?
2
How can a system reach its steady-state if the I-action of a PID controller, u(t), doesn't go to zero as the system approaches its desired value?
4
zero of spring-mass system
2
Nyquist theory - Control system - Stability
0
RHPZ in converter transfering the energy in a two steps approach -> mathematical model
0
Show A Non-Min Phase System Cannot be Controlled via Controllability Matrix?