Think of a converter transferring the energy in a two-step approach, like a boost or a buck-boost converter: first you store the energy in the inductor during the on-time then transfer it to the load during the off-time. Should a sudden power demand occur, the converter can't immediately react and must go first through another storing-energy phase before answering the demand. This intermediate phase naturally introduces a delay in the response to a change: the current in the inductor has to grow cycle by cycle (it cannot instantaneously jump to the next current setpoint) but this current increase is hampered by the inductor value and the available volt-seconds. The mathematical model of this delay in the response is the familiar RHP zero which appears in the control-to-output transfer functions of the said converters.

Above quote is from user Verbal Kint in this answer on the question: "Effect of right half plane zero on bandwidth of control system"

Why the physical phenomenon describe above by Verbal Kint can be modelized as an RHP Zero ?

Thank you very much and have a nice day !

The right-half-plane zero (RHPZ) in a switching converter featuring an indirect energy-transfer scheme is present because of two things: 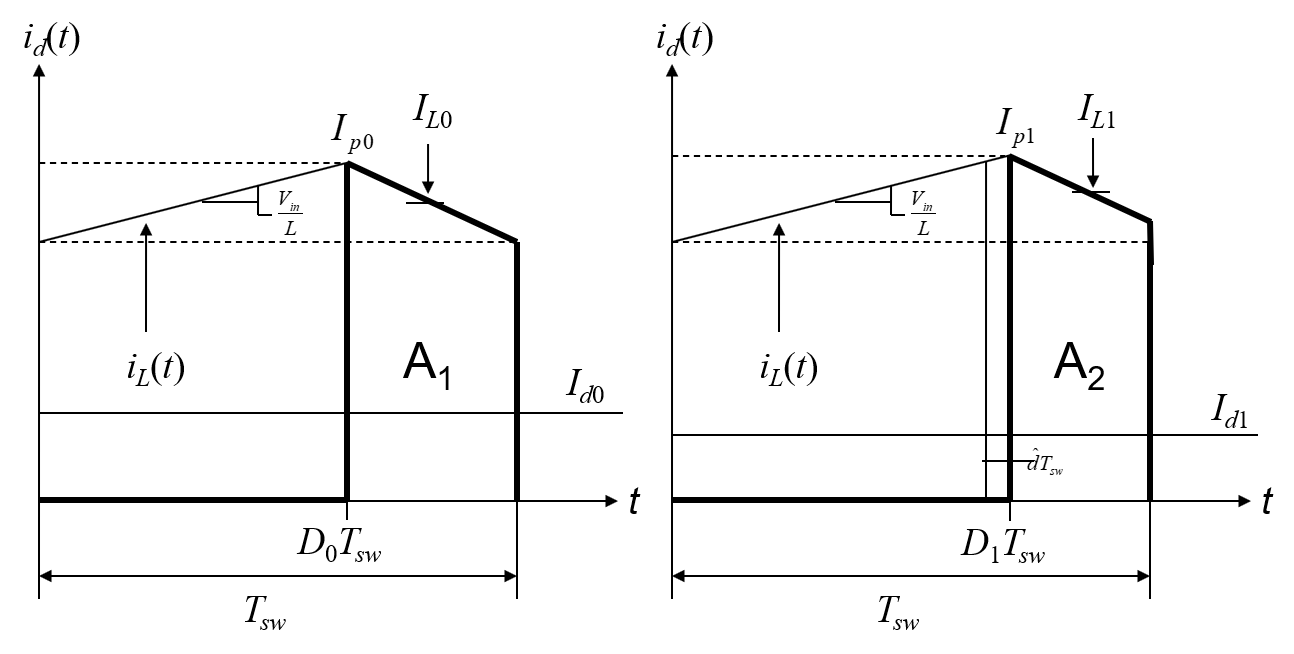 This is the instantaneous current flowing in the boost diode. In the left-side drawing, the average current \$I_{d0}\$ is actually the area \$A_1\$ averaged across the switching cycle. This area depends on the peak current \$I_{p0}\$ and obviously the duration \$(1-D_0)T_{sw}\$. When the power demands occurs and the controller asks for more energy delivered to the load, it pushes up the duty ratio a little bit. If the inductor is of small value or if the voltage applied across the inductor during the on-time (the so-called volt-seconds or V-s) is high enough, then the new peak current \$I_{p1}\$ might be sufficiently large to compensate for the reduction in \$(1-D_1)T_{sw}\$ and \$A_2\$ is larger than \$A_1\$. When this is respected, then the output voltage increases as it should despite the increase of \$D\$. Now, if you deal with a high inductance or you operate from a low input voltage, then the available V-s might be too small and \$I_{p1}\$ will not be high enough leading to \$A_2\$ < \$A_1\$: the output voltage drops despite an increase in \$D\$. The control-to-output control law is reversed and the converter is unstable.

The below sketch shows how it works when the duty ratio slowly moves, giving enough time to always ensure \$A_2\$ > \$A_1\$: 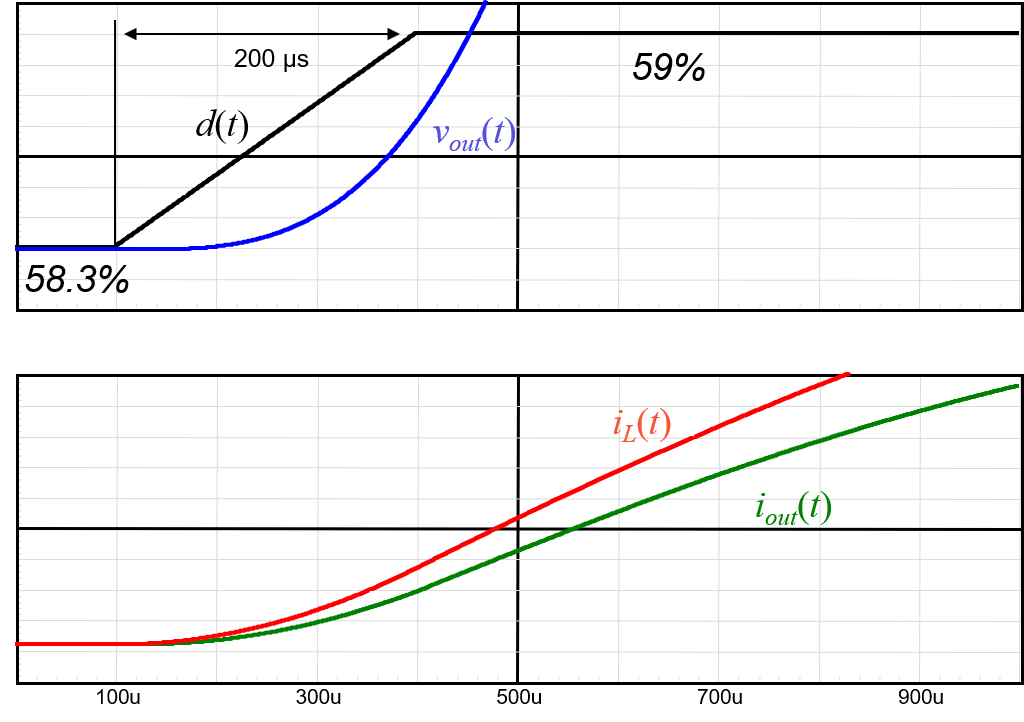 There is no problem and the output voltage increases as expected, following the control variable \$D\$. Now, speed up the duty ratio change from 200 µs to 10 µs and the situation differs: 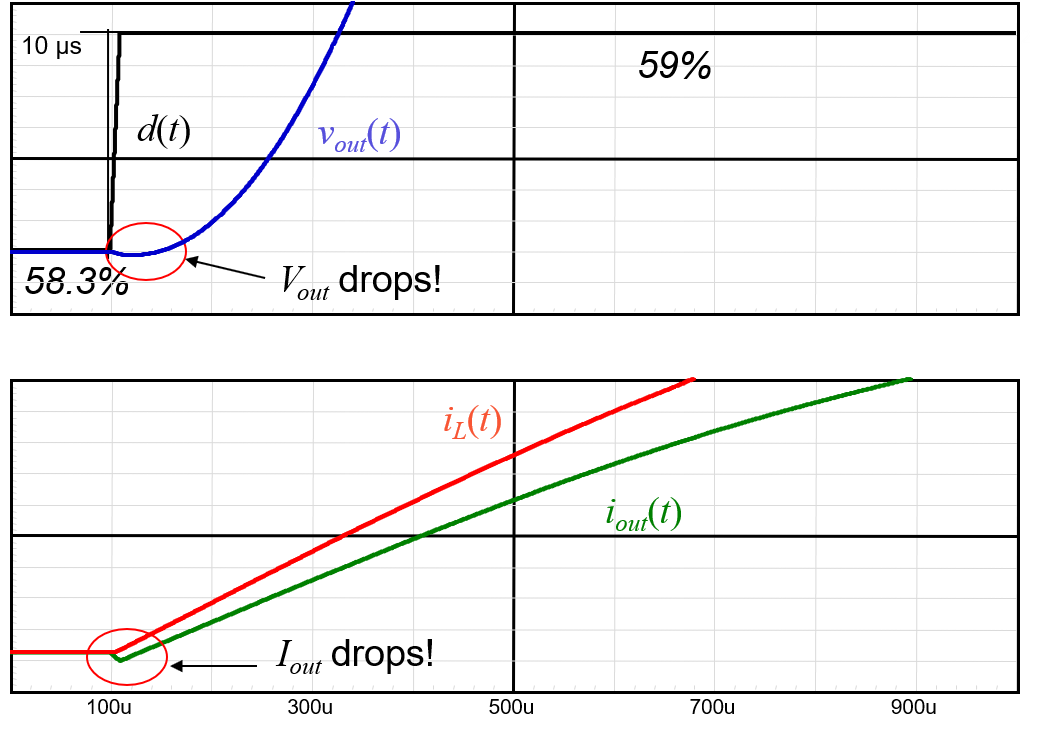 The duty ratio variation is too fast and the inductor cannot increase its peak current quickly enough, engendering a reduction in the diode average current and a drop in \$V_{out}\$. this latter falls before taking off as it should. This is the typical physical manifestation of a RHP zero in a control system.

As a conclusion, you need to purposely slow down the converter so that even if there is a fast demand on the output, it does not propagate and create a fast reaction on \$D\$. The crossover should thus be selected so that there is always enough time for the inductor to build energy cycle by cycle and answer the power demand. Practically speaking, you meet this goal by limiting crossover to 20-30% of the worst-case RHP zero position. Should this RHPZ occur at 1 kHz, you would need to limit \$f_c\$ to around 250 Hz for an acceptable performance. Should you try to push it higher and you may not have enough phase margin.

By going through small-signal analysis (with the PWM switch model for instance), you can unveil the RHP zero in the transfer function. Look at my APEC 2013 seminar, starting slide 65, there is the derivation you want. You could also look at the interesting approach followed by the legendary Lloyd Dixon when he was with Unitrode where he derived the RHP zero position without going through a complete model analysis.

As a final note, whether the converter operates in voltage- or current-mode control, the RHPZ remains at a similar location. In DCM, there is still a RHPZ but relegated to high frequencies and it is generally not a problem unless you need a high crossover frequency.

You can see the effect of adding a RHP zero to simple 1st-order system featuring a LHP pole and a LHP zero. When you turn the LHP zero into a RHP zero, the time-domain response to an input step first drops below 0 before taking off later on. This is what you observe in the third graph, typical of the RHPZ manifestation: 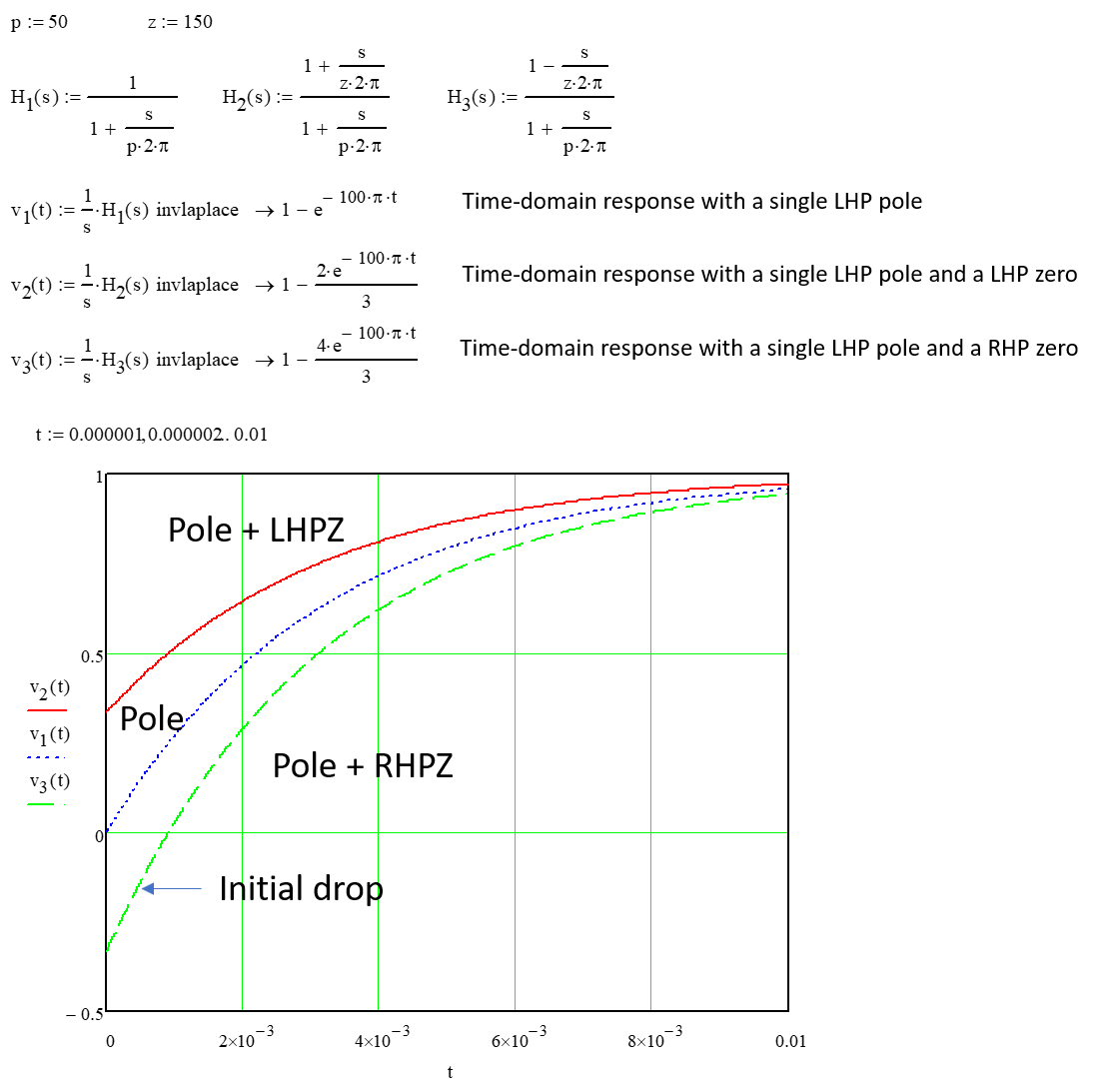 This video nicely illustrates the time-domain response depending where the poles and zeroes are located in the \$s\$-plane: really easy to follow.

Not the answer you're looking for? Browse other questions tagged switch-mode-power-supply control-system or ask your own question.

2
Mathematical model of the temperature of resistors/heatsinks?
15
Unconventional voltage regulation scheme in the secondary of an ATX power supply, how does it work?
0
Step up SMPS with unrealistic voltage output with a 100W LED COB load
0
bandwidth of digital control design in conventional dc-dc converter
0
RHP zero in boost converter
3
DC microgrid analysis using state-space representation
0
Reactive vs Real Power in DC-DC Converters
3
PFC controller - How does it work?