Eliminate beeps and bleeps in the power lines

The platform is having various supply voltages generated by the power supply: +5V (for digital part), +12V and -12V for analog part, including video amplifiers.

My device, which is being installed into the platform, has several switching power supplies based on Maxim step down converters. One of them, converting +5V to +3.3V, powers the DAC.

I designed the audio circuit the following way: DAC output, through coupling capacitor, goes to the op-amps, which are powered from +-12V of the platform. I can not power op-amps from the 3.3V source because their inputs do also get negative voltage (due to coupling cap, and it can not be changed).

Due to platform powering video circuitry, +-12V power rails are badly affected by the noise from video amplifiers, and if DAC is silent, then output of op-amps, if amplified at about 50 dB, sound strong beeping and bleeping sound in the audible frequency range. If I disconnect DAC output from the op-amp circuitry, and leave only pull-down 1MOhm resistor to the ground at the op-amp input, this beeping/bleeping noise becomes much more loud and can be heard without amplification (because op-amp coupling with ground becomes weaker than when DAC is connected).

I checked DAC output (being powered from 3.3V generated by 5V -> 3.3V converter), and, when DAC digital input is constant, DAC generates white noise at its output at much much less magnitude, thus bleeping does not come from DAC but definitely from +-12V power rails.

Do I move in correct direction? Is it an overkill? Can you advise any other ways?

Update: special thanks for bobflux for his advice. Powered the op-amp circuit on the breadboard using the 4 x 18650 cells, connected input to the output of DAC and to the ground nearby this output. Noise is still there.

Thus you were right, the op-amp picks up noise, because DAC output and op-amp input are relatively high impedance. Look at this post (it will also give you an idea about layout). I was advised to increase DAC output resistor from 100 Ohms to 1 kOhm, and it seems increased the noise pickup level. Next, I use unshielded wires between this resistor after DAC and op-amp input, wire length is approximately 8 cm (3").

Thus the major problem lies not in the noisy power lines, but in noise pickup (what a pity I can not see or feel this noise around! :). Unfortunately I can not move DAC closer to the op-amps, but I can choose wire types I use and ground connection type.

I can use shielded wires from DAC to op-amps, but what to do with grounding of the shield? If I ground at both ends there will be a ground loop. I have read somewhere that I must ground only at one end, but that was about two different devices on the long transmission line, here I have single device with GND polygon pieces connected together on the board from both sides, thus maybe connecting shielded wires' ground at both ends - near DAC output and near op-amp input/power may be a way to go.

Next, what to do with DAC output impedance, as if I will return back to 100 Ohm resistor, as advised on the typical circuit diagram for UDA1334, there may be excessive input current for op-amps during power off. That would be super if I can put op-amp just after the DAC output lowering circuit's output impedance before transmission further to op-amps, but I do not have +- supply in that place of the board (and actually very tight on space).

Small update on the op-amp impedance: I was using AD8512 before, it has 5 mA input current limit. Now I use ADA4610, having 10 mA current limit. DAC output circuitry may be as high as +3V (depends on the coupling capacitor charge during power off), thus 300 Ohm series resistor must be fairly ok for the protection of the input.

Update: I decided to make shortcut, and instead of listening to ground noise just solder shielded wires (as it was planned at the very beginning): 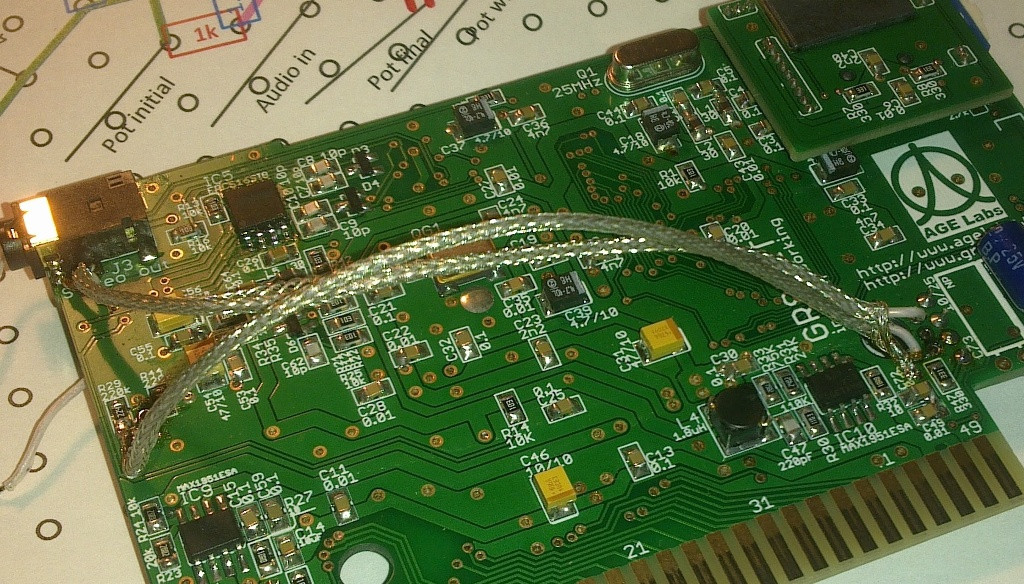 Now there's another problem, but not related to the originally asked: what are the best shielded wires for the purpose (aiwires for consumer audio) and how to wire properly not to short circuit components on the board (these were actually reasons why I was not using shielded wires)...

Your noise can couple over two path into the signal. If the power source of the OP Amp is noisi and the Amp does not have enough PSRR (power supply ripple rejection) the noise on the supply will show in the signal. Or it can couple directly to the signal (specially if you are working with high impedance).

To reduce power supply ripple, place a LDO between OPAMP and Supply. Give it at least 1.5 to double of the minimal headroom. This will reduce noise from the source.

Direct coupling can be reduced by increasing the current flowing on the singal lines or by better placement in the PCB.

Not the answer you're looking for? Browse other questions tagged power switch-mode-power-supply noise or ask your own question.

0
Op-amp circuit voltages after power off

0
Eliminate hiss and noise
3
How to eliminate computer noises from audio on shared power supply (12v/5v buck converter)?
1
CMOS Gate and Coupling Noise from Loose Wires
6
What kind of DC power supply has least noise
5
How to eliminate noise from switched power supply
0
DC-DC boost converter voltage spike at power on, popping sound
2
How to eliminate the noise that is generated after the A\D conversion?
0
How can I model a circuit for this noise coupling phenomenon
0
Ground Audio channels when mute
0
Op amp current noise reduced by putting pressure on signal cable