(sorry for the wall of text, I tried to give as much Info as possible)

I am pretty new to electronics and am working on a project regarding controlling the flow of a pump (BLDC based). End goal: Apply a sinusoidal supply around a variable DC offset with variable amplitude (at least +-4V) and frequency (0-10 Hz, low Freq). One big hurdle is definetly the pump... The manufacturer only provides a very short explaination of the electrical aspects of the pump. Unfortunately, I HAVE to use this model.. Datasheet (I am using M400-S180): https://docs.rs-online.com/9836/0900766b8162656f.pdf. Currently I am using the XR2206 kit for the modulated sine wave. It has a DC Bias of 6V with an Amplitude of +-4V (8Vpp). But it only gives out 20 mA which is not enough to power the pump (I measured the internal Resistance of the pump: 2V - 0,09 A - 22 Ohms, so I guess it needs at least 0,1 A to start). So I wanted to use an bjt common collector amplifier (PNP) to boost the current. I watched some videos and tried to calculate the right resistor values. Basically I assumed Beta=10 and wanted Ie=200mA so Ib=20mA.I am not sure how to calculate Resistances with AC so I assumed to use Vrms? Vmax=10V -> Vrms=7V, R1=7V/20mA = 350 Ohms (used 330). R2=7V/200mA= 35 Ohms. At the time I did not have 35 Ohms at hand so I used the next smallest, 17.5 Ohms so double the current. 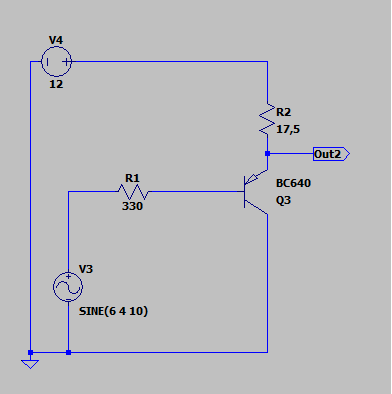 It worked okayish. The pump started and amp/freq modulation was possible via the XR2206. But the max Vpp changed from 8 Vpp (+-4V) to 3 Vpp (+-1.5V) and also the 17,5 Ohm resistor got pretty hot because of the large current. Also, the Vrms of the Output was only 5V. I am not quite sure why the amp dropped but maybe its because of the difference in output impedance of circuit and input impedance of the pump? (I am honestly a quite a bit confused by impedances so this could be complete rubbish). Also the circuit was not so good designed as I found out through more videos. 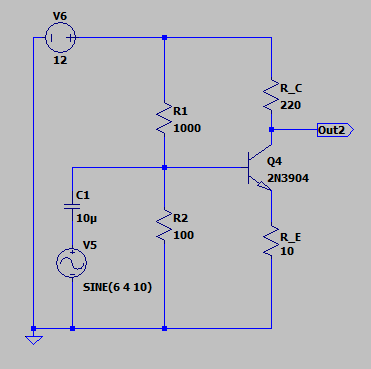 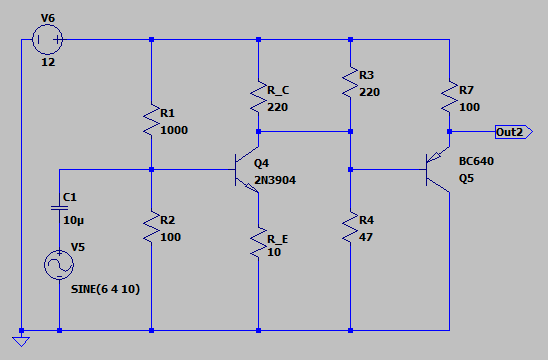 Well as I already teasered it did not work. Amp Modulation was reduced to +-1V (2Vpp). The pump did turn on but the whole circuit drew more than the 120mA calculated, It was around 300mA. Since then I have tried numerous simulations on LTSpice so I dont have to build up/down circuits every 10 mins but until now no success. Can anyone suggest me a direction where I can head to or point out the flaws in my circuit/calc? Does anyone have a clue why the amplitude of the sine wave dropped? Also: Sorry for the Variable-formatting, pretty messy!

The load on the amplifier (first transistor) collector cannot be larger than 47 ohms.

Thus the maximum gain cannot be larger than 47/10, at the largest.

View that first transistor as being a voltage_controlled current generator.

The load on that first transistor collector is what converts the collector current back into a voltage.

The various paralleled resistances on that collector are

And all these in parallel can only be LESS than the smallest, which is 47 ohms

Not the answer you're looking for? Browse other questions tagged transistors amplifier brushless-dc-motor or ask your own question.

1
Why this transistor logic as switch is not working?
3
Learning transistor based circuits
5
How to derive the precise gain of an NPN common emitter amplifier without emitter degeneration?
0
How can I set the quiescent current for a grounded-emitter amplifier?
5
Why is my transistor beta lower than expected?
0
Analyzing a PNP Transistor
0
Calculating base current without knowing current amplification
0
Kirchoffs Laws and Class-A Amplifier Circuit
0
Transistor: Getting “incorrect” graph for input voltage to output voltage