I am trying to build a Wheatstone circuit to detect temperature changes of a low resistance (about 10 ohm) wire.

For a first try I would like to use a circuit proposed in this Maxim Application Note 6144 How to Linearize Wheatstone-Bridge Circuit for Better Performance, Figure 7: 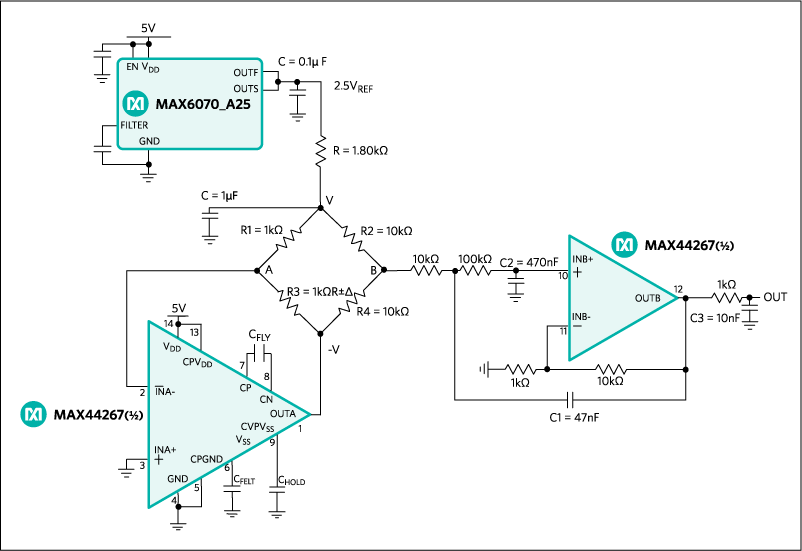 I am a beginner in using and understanding schematics. So in general I have two questions for the beginning:

And what needs to be changed if R3 is only 10 Ohm for example?

In a wheatstone bridge, you want the resistors on opposite sites to have the same product. So, in this circuit,

However, it's usually a good idea to keep the relative orders of magnitudes, so, R3=R1=10 Ω, R2=R4=100 Ω would theoretically work better.

You might be getting into current sourcing ability problems of your 2.5V source and your opamps with a 100Ω load only, but:
I've never seen a 10 Ω temperature resistor (not a good idea to make the impedance of sensor so low), so I presume this remains a theoretical problem.

In the example some capacitors don't have values. Some are names C_FLY, C_FELT, C_HOLD or don't have a name. Can you guys explain me why they are named like that and what values would make sense in this circuit?

Yes, but it makes no sense for us to explain them: they're explained in the MAX44267's datasheet quite explicitly, and better than we could do it here ad hoc in an answer.

Watch out, though: the labels on the schematic in the Application Note are um, badly done.

C_FELT is connected to pin 6, which is Vss according to the datasheet. So that's the "low-ESR bypass capacitor C_FILT" described in the table at datasheet page 11.

Not the answer you're looking for? Browse other questions tagged capacitor circuit-analysis temperature wheatstone-bridge or ask your own question.