Why can't this circuit amplify the oscillator signal? 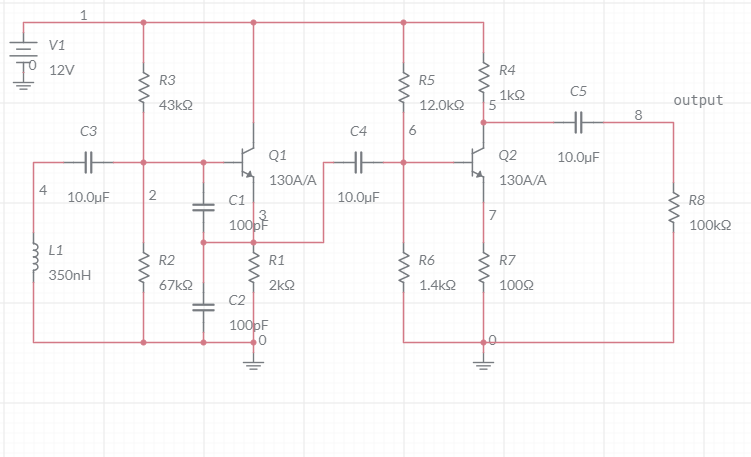 In the first image, the left part is a Colpitts oscillator. It works at 40 MHz, output 300mV maximum. The right part is a common emitter amplifier. Its gain is 10. The two transistor are s9018 - bandwidth is 400 MHz,hfe is 130.

I used a 100MHz bandwidth oscilloscope to measure its output. It does not get amplified at all - the output is lower.

I don't understand why does the oscillator output decreases when the frequency increases.

The amplifier design will have limited bandwidth and the gain at 40MHz will be significantly less than at low frequencies.

The main culprit will be the roll-off due to capacitance at the collector of Q2.

For a quick calculation, you can ignore the output resistance of the transistor and assume that it is defined by the physical resistor (1k in this case). You can also ignore any inductance of the wiring although that could be significant at higher frequencies.

The usual way to define the frequency response of a circuit is by way of the 3dB response.

This is the frequency at which the response will be 3dB down (ie 0.707) of the response at low frequencies and will be when the reactance of the capacitance is equal to that of the resistance.

The resistance is 1k Ohm, the capacitance is probably about 20pF - every terminal in a proto-board is going to be about 5pF with more from the transistor.

To make things worse we have not yet accounted for the capacitance of the scope probe;

Assuming you use a x10 probe the output will drop by another factor of two so the output will only be 1/12 of the expected value. That stage was intended to have a gain of 10 but in actual fact will attenuate the signal slightly.

To improve things there are a number of solutions:

With a 300Mhz transistor running at 40Mhz the current gain will have reduced to about 8; it can still have gain at that frequency but it will be lower than at low frequencies.

Perhaps consider a cascode or base-coupled amplifier. Breadboard issues aside, the collector-base capacitance of Q2 will reduce the voltage gain at high frequencies. A cascode arrangement avoids this, but it's typically used with a split supply rather than the single rail that you are using - I don't know if that's feasible for your application.

Not the answer you're looking for? Browse other questions tagged transistors amplifier oscillator or ask your own question.

11
Common Emitter not amplifying
0
Voltage Gain decreases when load resistance included
1
Colpitts oscillator: emitter resistor
1
My collpitz oscillator doesn't oscillate
2
Designing a VHF Colpitts oscillator using BJT
0
Does a BJT amplify the biased DC voltage or just the AC/DC input voltage?
3
Why is this BJT Schmitt trigger producing a sine wave?
0
Why do the center tapped capacitors in Colpitts oscillator give an inversion?
0
How to make sure this oscillator will be stable?