where the first bracket is real and the other bracket is imaginary. There is not one frequency that can possibly make both the real and imaginary part of the algebra to be zero! 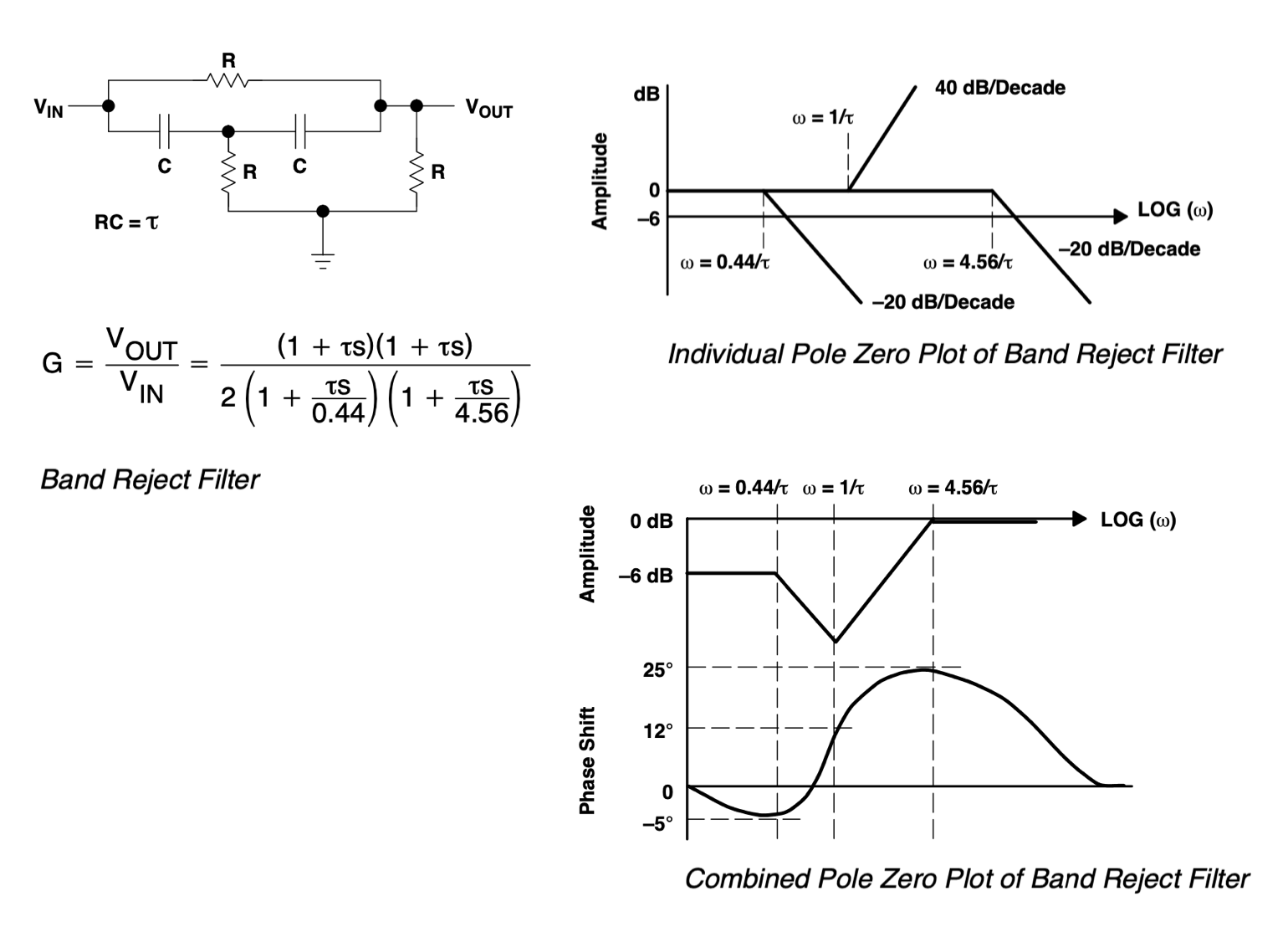 Perhaps this is where the confusion starts: 's' is complex (re + j*im, or sigma + jw), not just imaginary. Those two terms are often accidentally used interchangeably, and they shouldn't be.

G is complex too, it has a phase and a magnitude for each w. It can be written as phase & magnitude or real & imaginary. Conversion between the two is only a matter of math, not circuit design.

Another typical confusion is equating the pole frequency with the cut off frequency. In first order sections, of which you have two, they are not the same, not even close.

In some circuits they can be close, such as in high-Q second order transfer functions with conjugate complex pairs. That's a different animal, as it involves inductors or op-amps with negative feedback.

As you noted, there are two poles in the transfer function, and the pole is negative and real at s=-1/a. We say it is in the left half of the s-place, because left/right of the origin is -Re/+Re, and above/under the origin is +Im/-Im.

There is no w for which the denominator equals zero. To get the TF as a filter for sinusoids, you substitute s=jw and plot |G(s)|. In the log-f/dB scale you'll see knees.

Have a look at this plot for a low pass transfer function: 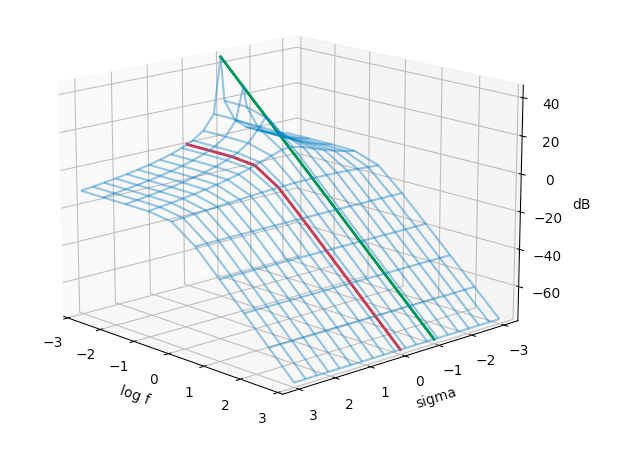 What you see is the magnitude of the transfer function, |G(s)| in dB, for a single pole at s=-1.

It is drawn as a 3D surface (or wire) plot, because G(s) has a 2 dimensional argument: the real part of s (sigma), and the imaginary part of s (omega, or 2pif):

The knee on the red line is called the cut-off. It's NOT where the pole is. The pole is at w=0 along the green line. The knee location depends on the distance of the pole from s=0. The two are related: the knee is determined by the sigma of the pole, but the pole itself is not at the knee.

If all poles are in the left half-plane, you can obtain the the Fourier transform by setting s=jw, and that provides you with the familiar G(w) (or G(f)) transfer function. Often G(s) is provided, and G(w) is plotted.

G(w) is not identical to G(s), but in practical analog design cases, as in your case, it is the same; not just approximately or practically, but also theoretically.

Here is another nice plot example of G(s) with complex s, and it includes a plot for G(jw). This is not your case, but it shows how a pole in the s-plane influences the transfer function along jw. 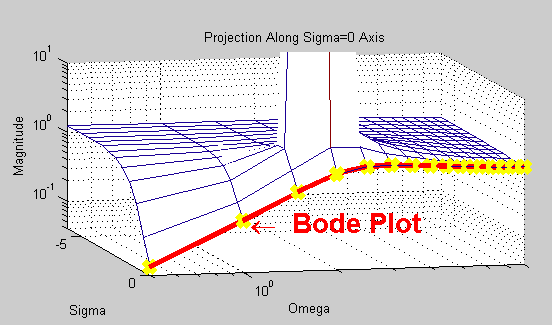 Notice the "circus tent pole" at sigma<0. That's where the response is infinite. But along the red s=wj line it's a familiar high-pass. As you move the pole closer to the jw axis, i.e. as you move sigma closer to 0, the pole will become more pronounced. In many filter designs (Bessel, Chebyshev...) the many poles are carefully placed at various distances from the jw axis and at varying frequencies, to get overall flat responses and deep attenuations.

And now ultimately to your question

So how do 0.44/τ and 4.56/𝜏 come out to be the pole frequencies, and why is 1/𝜏 the zero frequency? None of these frequencies take the transfer function to infinity or zero.

Further, to use G(jw), the input and output signals must be represented as complex signals, and that's how you'll see attenuation as well as phase. Often the response to stationary sinusoids matter, in which case s=jw without the sigma for the input signal. This is how the Fourier transform is obtained from the Laplace transform.

If all you want is the attenuation, then it suffices to convert G(jw) (complex) to |G(jw)| (magnitude), which will give the amplitude plot. The math is covered in many other great resources, but I'll mention that |G| is sqrt(re(G)**2 + im(G)**2), and you can see it's a real number.

Here's an example of a single pole transfer function: 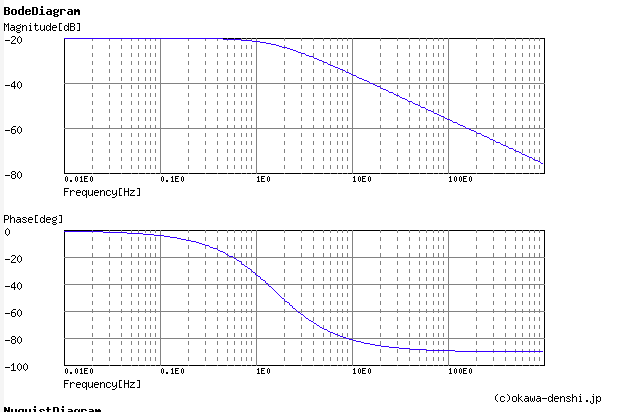 As you can see, a "pole" does not mean "infinity" in the transfer function for s=jw, i.e. for stationary sinusoids.

If either part equals zero, it makes the whole transfer function divided by zero hence the poles are when s is either of the above values.

I can see you are struggling with this so here's a 3D view of example pole positions along with the bode plot (on the jw axis): - 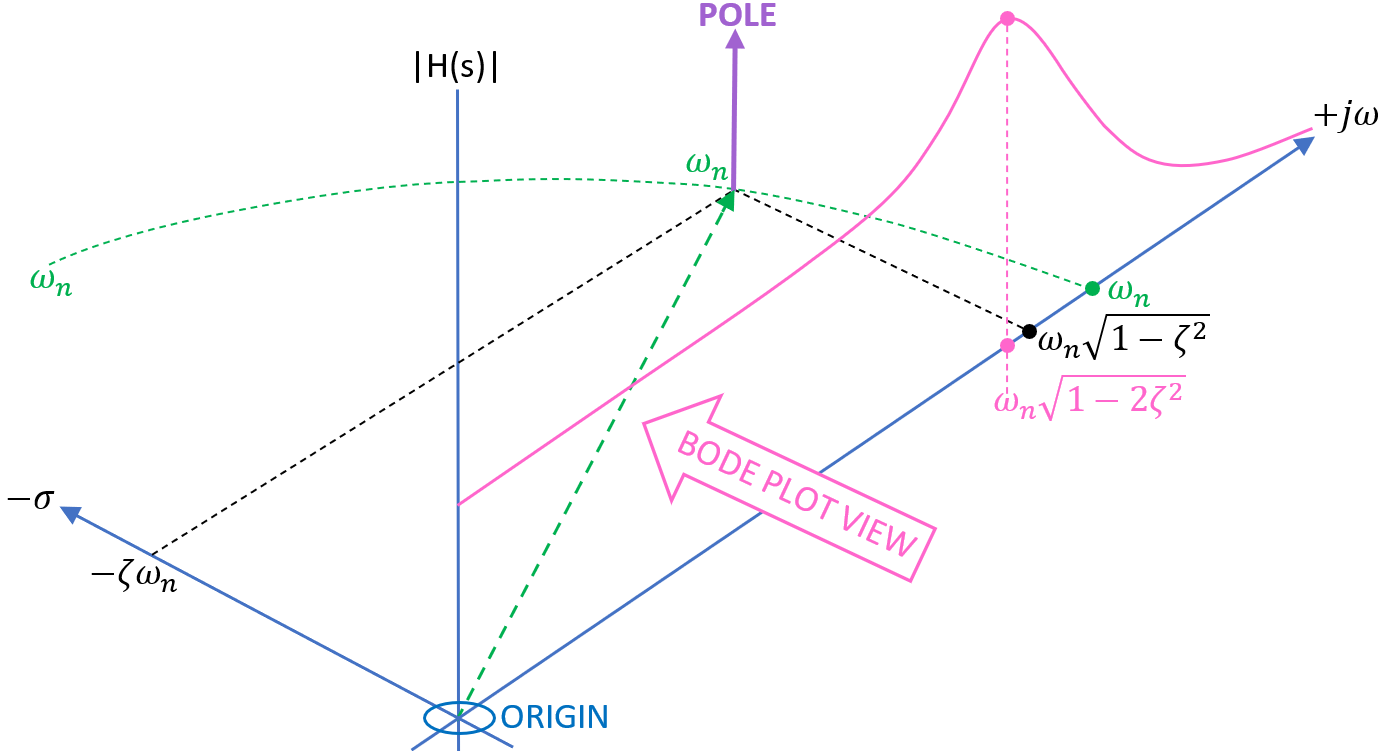 Note that your TF will produce two poles along the \$\sigma\$ axis at negative values.

If you do the math, you'll see that the poles and zeroes are evaluated for the mathematical transfer function, as in \$s=\alpha+j\omega\$, which means that you're solving the transfer function in the whole Laplace domain. This is why you get both real and imaginary parts for the poles and the zeroes (where applicable).

Maybe not asked but that 2 capacitor filter cannot kill a frequency. You can reach some attenuation at some frequency range but at no frequency the output is zero. That's because with 2 capacitors you cannot get in a passive RC circuit so much phase shift that there happens full cancellation at some nonzero frequency.

Others have already tried to explain the math things like no frequency will make the transfer function zero nor infinite. I suggest you try a little more complex filter that can kill one frequency. It's known as "Twin T Notch Filter". See this calculator example: http://sim.okawa-denshi.jp/en/TwinTCRkeisan.htm

A simpler passive filter that can theoretically (=with ideal parts) kill a frequency needs a capacitor and inductor. One example:

This is so simple that a beginner can quite soon solve the circuit with equations and find the poles and zeros. There's zero in the imaginary axis and that makes the output zero at that frequency.

It is a recurrent question, "why I can't see the magnitude going infinite with a pole and zeroed-output with a zero"? If we take the example of a zero, you can certain go to the lab and build a small \$RC\$ filter featuring a pole and a zero as below. But if you excite this network at a frequency tuned at the zero frequency, still a signal is observable as a response:

There are specific cases though when the roots are naturally located in the imaginary axis. Having a dc block capacitor places the zero at the origin, meaning there is a root for \$s=0\$. Set the stimulus to a 0-Hz frequency - a dc voltage - and you will observe 0 V as a response:

For the zeroes, if you build a high-\$Q\$ notch, meaning the damping is almost inexistent, then the zeroes are located on the vertical axis \$s=j\omega\$ and your sinusoidal stimulus properly tuned will cover these zeroes. In that case, the response is truly a null as shown below:

You can extend this approach to poles for instance: build an integrator around an op-amp featuring a pole at the origin and if you bias the input with the same 0-Hz frequency and a very small value, you'll observe a very large value limited by the op-amp open-loop gain and later clamped by the op-amp railing up. Same with an undamped \$LC\$ filter: the poles are close to be pure imaginary (assume an inductor with very small resistive and magnetic losses and a cap. with a negligible equivalent series resistance) and a small stimulus tuned at the double pole frequency will generate a very high voltage.

Using this technique is the basis of the fast analytical circuits techniques or FACTs described in an APEC seminar I taught in 2016.

10
What does a Bode plot represent and what is a pole and zero of a Bode plot?

1
Bode diagram of a single complex pole and under-damped system
3
What exactly is Pole Frequency in a Filter and how does it affect the frequency response?
0
A confusion about a transfer function's Bode plot and s domain view
2
Pole/Zero plot is the same for passive and active (w/ gain) bandpass filter, why?
0
Constructing Bode plot from experimental data and constructing a transfer function
0
Zeros and poles in the following bode plot
0
What information Bode plot does NOT present?
0
Don't understand this zero pole plot example