What happens when we increase load on a motor? [closed]

Ask Question
Asked 9 months ago
Active 9 months ago
Viewed 924 times
2
\$\begingroup\$
Closed. This question needs to be more focused. It is not currently accepting answers.

For engines when we increase the load on them while maintaining the rpm they start consuming more fuel.

But what happens for an electric motor when we increase the load on it.

It would be of great help you explain current, voltage and resistance or any other factor involved in it as I am a mechanical engineer so I have little less knowledge about electric motors.

It depends on whether the motor is being controlled or not.

Assuming it is not being controlled at a constant speed, then really the same thing happens in all three cases.

Motors with electronic control can maintain constant speed even when the load varies.

Efficient induction motors running directly from utility power can typically produce much more torque than the full load torque. But they will also consume high current in the process. The peak torque occurs at relatively high speed for efficient motors.

Certain applications use less efficient induction motors which are designed to have maximum torque occur at stall speed. I guess these work better for applications where the load changes rapidly and violently (such as rock crushers and punch presses). The more you slow it down the harder it fights back, and it never gives up even when it is stopped.

The more efficient motors will give more and more torque as you load them up but at some point they reach peak torque, and once you slow the motor down below that speed, it gets easier and easier to resist the motor and make it stop altogether. Stall current is still very high even though no work is being done. Best not to stall this type of motor.

The relatively simple types of motors that operate without an electronic control unit are electromagnetically self regulated. The DC motors tend to operate at a speed determined by the applied voltage. AC motors operated at a speed that is determine by the applied frequency but requires the voltage that is appropriate for the frequency. When the load is increased, the speed drops or tends to drop. That causes an electromagnetic imbalance that results in increase current. The increased current causes the motor to develop more torque. The balance is restored when the torque supplied by the motor matches the torque required to maintain the speed of the load.

Every motor has a speed vs. torque capability curve. Every load has a speed vs. torque demand curve. The motor will operate at the intersection of the two curves. The various types of motors have differently shaped torque vs. speed capability curves, but their general nature is for the curve to slope downward from high torque at zero speed to zero torque high speed, with torque on the vertical axis and speed on the horizontal axis.

Electronically controlled motors are much the same, but the controllers adjust and limit the operation along an infinite number number of essentially vertical torque vs. speed curves that can be produced for a range of operating speeds. The controller limits the maximum torque by limiting the current.

That is the general concept for all electromagnetic motors. The detailed theory of operation differs among the many types of motors and control schemes, but the overall concept is generally the same for all of them. 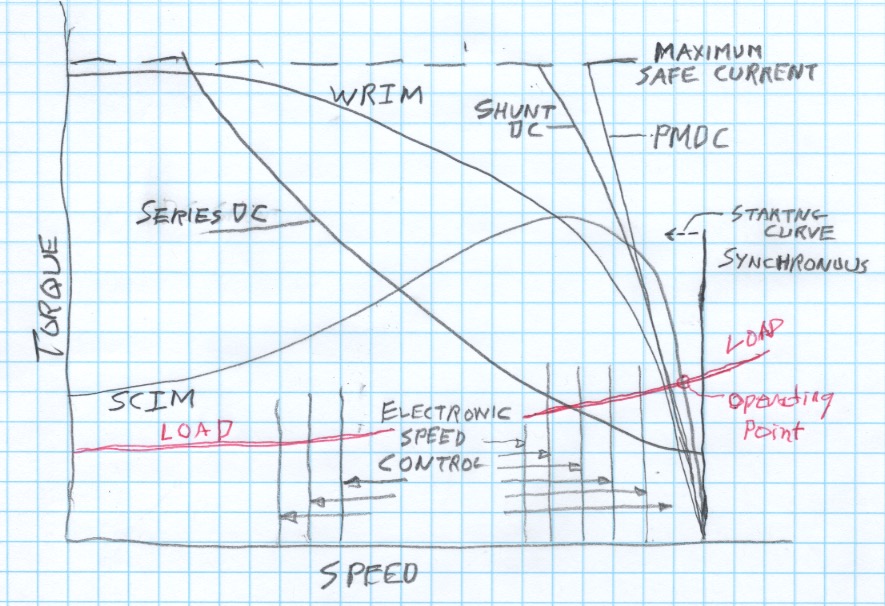 Not the answer you're looking for? Browse other questions tagged motor electric or ask your own question.

2
Electric motor will only start turning at lower voltages
2
How does a synchronous motor know to increase current when the mechanical load is increased?
0
Motor Torque overload
2
What happens when I suddenly stop the axis of an electric motor?
0
Installation of an AC Drive on a Plastic Extruder
0
reg:PMDC motors attached to Gear boxes