Capacitor voltage in buck converter and how it steps down voltage

I am having an issue understanding how the a buck converter circuit actually steps down the input voltage. Specifically, my issue is regarding the capacitor charging and discharging. Let's consider the basic buck converter diagram with an ideal switch:

It may be more useful to focus on the inductor:

First assume it's fairly large and the switching frequency is fast.

Now the current through the inductor will remain fairly close to constant and always in the same direction.

And that's pretty much it. (for a buck operating in CCM, Continuous Current Mode)

Oh - the capacitor - it just helps Vout remain close to constant, despite the variation in incoming current.

(Switch OFF for too long and the curent eventually falls to \$0\$ : the maths for Discontinous Current Mode, DCM, are different.)

During this phase, the current through the inductor will gradually increase over time. The inductor is storing energy in its magnetic field.

When the switch opens, the inductor becomes a current source, using the energy it had stored. Current flows from the inductor through the resistor, trough the diode, back to the inductor.

During this phase, the current through the inductor will gradually decrease over time.

Following ohm's law, the voltage across the resistor will thus also be a triangle waveform.

The capacitor will shunt the AC portion of the current, leaving only the DC current going trough the load, thereby stabilising the voltage on the load.

when the switch is opened, a negative spike appears

We must understand this confusing phenomenon before we go into circuit analysis. Try to figure out how a "Joule Thief" (blocking oscillator) works without knowing this.

During the first phase of operation, the circuit effectively looks like this:

Once the switch opens, the circuit now looks like:

The inductor has indeed switched polarity! Due to the collapsing magnetic field, it has become a voltage source itself! Current still flows from + to - , but since the inductor is now driving the circuit it flows around the loop to do so.

Since current travels the same direction in both phases of operation, it never tries to discharge the capacitor. Only the load (R) will do that.

The easiest way is to view the buck converter as a low-impedance square-wave generator delivering a signal toggling between the input voltage \$V_{in}\$ and 0 V and averaged by the \$LC\$ filter: 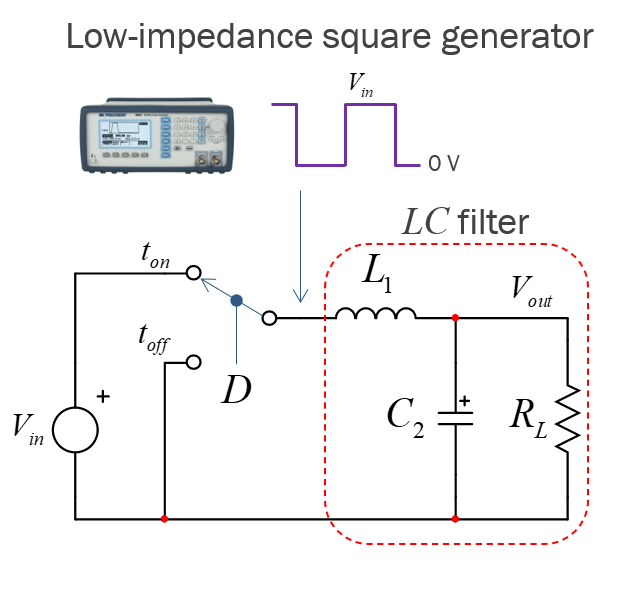 An integrated circuit usually instructs the power switch to close and open at a pace set by the clock. The time during which the switch is closed is the on-time and is labeled \$t_{on}\$. During \$t_{on}\$ the power switch is closed and applies \$V_{in}\$ across the diode. The inductor is magnetized and a current circulates in the load. When the switch opens, the inductor demagnetizes and the diode starts conducting to keep the current circulating in the same direction. The voltage across the diode ideally drops to 0 V and its lasts until the next clock cycle. In this mode, we consider the current in the inductor as continuous: it never returns to 0 A within a switching cycle. This is called the continuous conduction mode or CCM. Considering this mode, the average voltage delivered to the load by a perfect buck converter (no losses of any kind) is thus calculated as: 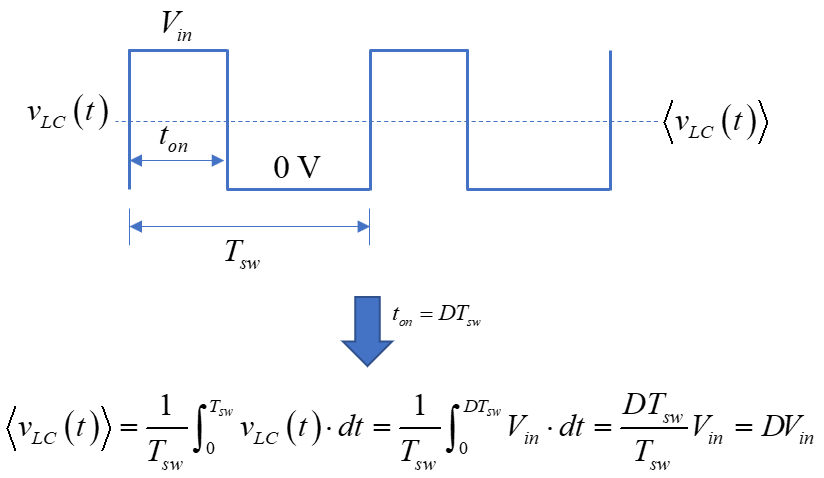 This is obviously a very simplified operation and literature abounds with more detailed description (you can have a look at a seminar I taught at an APEC conference here or check the book I wrote on switching converters). So you see that the duty ratio \$D\$ being constrained for a buck converter between 0 and 100%, the formula \$V_{out}=DV_{in}\$ can only lead to an output voltage lower than the input. For instance, with a 10-V source and a buck operated in continuous conduction mode at a 50% duty ratio, the output voltage is \$V_{out}=DV_{in}=10\times 5 = 5\;\mathrm{V}\$