I unfortunately have no pictures of my spice simulation since it's on a different computer, but I am attempting to create a Sallen Key lowpass filter with fc~=555Hz. I used the lowpass filter design on wikipedia's page on the topology with R1=2.26k, R2=16.5k, C1=0.1uF, and C2=0.022uF. This is the circuit: 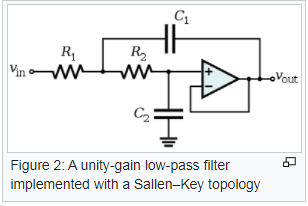 The cutoff frequency seems correct, and begins to roll off at 40db/decade but the circuit stops rolling off at around 18kHz and rises at 20db/decade to 1.2Mhz.

From my understanding the circuit should continue to roll off into oblivion as the transfer function has no finite zeroes, so I'm not sure why I'm getting this result.

This is a "well-known" issue with the Sallen-Key configuration.

The problem is that the output impedance of the amplifier rises with frequency and starts to look inductive so it's no longer 'fighting' the input signal more as the frequency increases. The output then increases by +20dB/decade until it levels out at the GBW of the amplifier.

You can mitigate this to some degree by increasing the resistor values (and proportionally decreasing the capacitor values), by using a more appropriate op-amp, by using a passive filter in series, or by avoiding Sallen-Key.

The effect as mentioned by Spehro Pefhany is even more severe because of the following:

For rising frequencies the capacitive impedance in the feedback path gets lower and lower - and an increasing portion of the input signal arrives DIRECTLY via this feedback capacitor at the opamps (increasing) output impedance.

This works against the "normal" ouput signal comong out of the opamp.

You can improve the situation using a buffer amplifier in series to the feedback capacitor (or use another filter topology). For a "slight" improvement you can reduce the value of C1 and increase the resistors correspondingly.

EDIT: I have simulated the circuit using (intentionally) the "old" uA741 opamp. Result: Max. attenuation at app. 30 kHz is 60 dB. With a buffer (ua741) in the fedback loop the attenuation has dramatically improved.

Not the answer you're looking for? Browse other questions tagged analog filter spice sallen-key or ask your own question.