I have simulated an damped sine wave generator in ltspice. Since I couldn't find a model for single pole double throw relay, I used two switch. It is very basic circuit first charges capacitor and with simultaneous switching oscilates with inductor.

For frequencies up to 10Mhz it works well. But for 100Mhz wave shape got distorted.

As it seen in the picture First cycle is smaller than the second one. This is in LTspice. In real life it is much more weird: For first 3 consecutive cycle voltage goes up. After 4th or 5th cycle it oscilates as normal damped sine wave as I would expect it to be.

When I double the value of inductor and half the value of capacitor signal gets better. But this time Q(it should be at least 10) factor decreases.

My purpose is to have a normal 100MHz damped sine wave. Not like in the picture(in the picture it goes up and then down).

How to deal with this problem?. 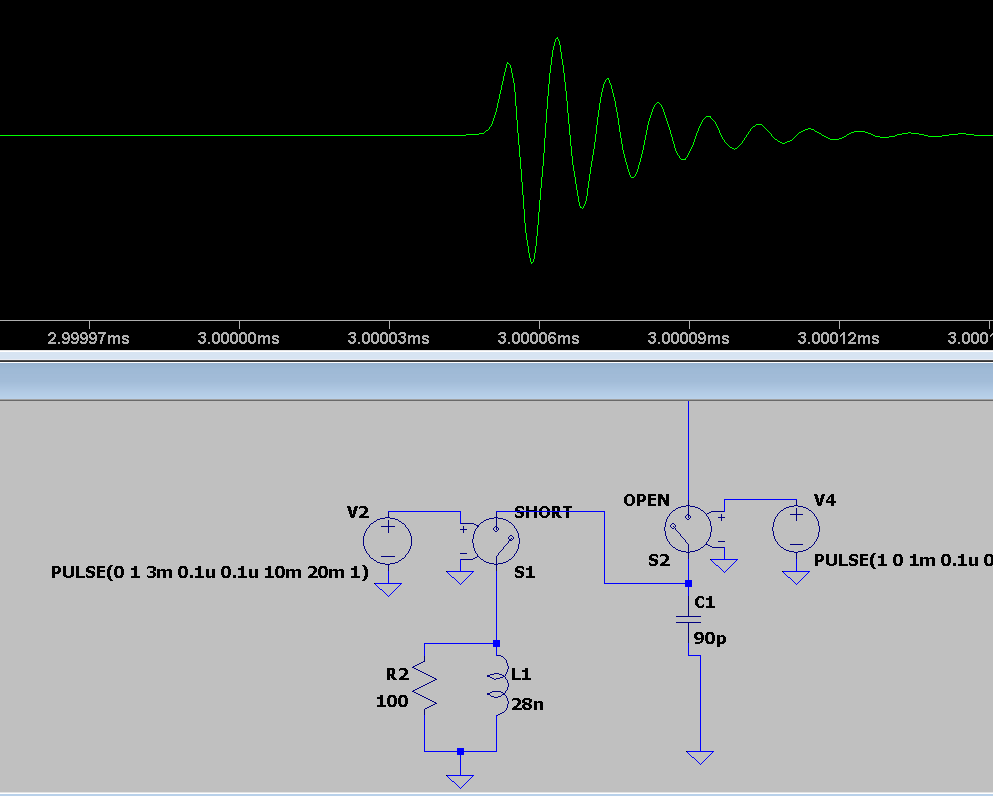 If it's about simulation, I already gave you a link. If you insist on using your current circuit then for 100 MHz oscillations you'll have to match that with the switching speed. Currently, from what I see in your schematic, you're using a controlling source with 0.1 μs rising/falling times. Since you're using the VCSW and since I see nothing else in your schematic (because you're not showing), if you used a positive value for the hysteresis, then it should switch abruptly, but that would not reflect a real-life case, where a relay would be bouncing. If you used a negative hysteresis, then the switch would smoothly transition between the two states, resulting in a soft switching, which is, probably, not what you're after.

If you're looking to build the circuit you're showing in real life, the solution in the link would not be valid, but the relay approach might be, despite the bouncing. In case you are also looking for different ways to build this, then one other option would be to use something like this:

This is a concept showing the oscillations across the parallel RLC tank in the drain of M1. The transistor can be any kind, as long as it can switch very abruptly. Here, I've chosen one from the database that's suppose to have 1.7 nC gate charge and 0.17 Ω on-resistance, in order for the gate signals to make switching times sharp. If you look at the drain current, you can see that in the simulation (at least) it can switch in around 11 ns, which means that for a 100 MHz sine oscillation, the fist period would be affected. The faster it can switch, the better the initial period.

There is no ideal switch, anywhere, so you'll have to expect imperfections, one way or another. Even the relays are imperfect, since their states may be the equivalent of a complete contact, or not, but the air has a finite resistance and, as the contacts get close (or open), the air will take on the role of a variable resistance/impedance, which makes the end of the switching smooth. How smooth? That depends on the speed of the contacts, the relative humidity, the dirt, whatever other causes there might be. And all these will be valid during the whole bouncing -- which should not affect the oscillations since they are usually in the ms range.

In the picture above, there is also a switch configured to be an ideal switch, i.e. there is no soft transition, which means that V(c,d) is the ideal representation of what such a circuit might show. Compare that voltage with V(a,b), and if you find that unsatisfactory, then the problem you'll need to solve has nothing to do with simulation or building the circuit.

Not the answer you're looking for? Browse other questions tagged oscillator passive-networks sine test-equipment or ask your own question.